Officer Kevin Brown was working an off-duty security detail at Kroger when he tased a minor for walking away from him. His actions violated multiple department policies, an investigation has found 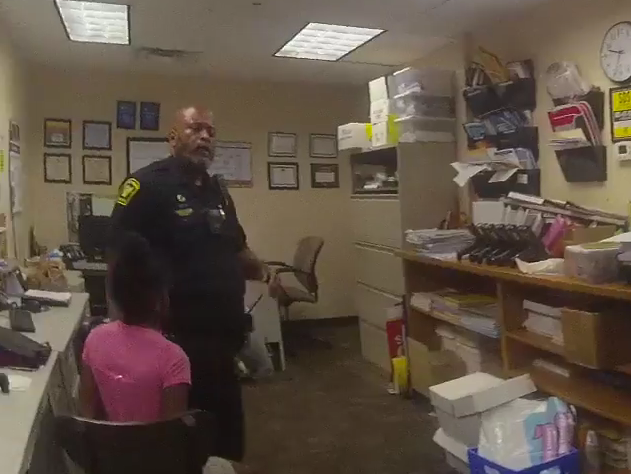 CPD
Officer Kevin Brown and the minor he tased as seen on body camera footage following the Aug. 6 incident

According to that report, Brown violated policy when he:

Brown was working an off-duty security detail at the Kroger on Kennard Ave. near Spring Grove Village when he received reports from employees there that three minors were stealing items, including candy and soda, from the store. Brown approached one of the girls, who had tried to leave through a locked exit. Brown asked her to stop three times. She continued walking, so he tased her from about 10 feet away. Security footage from Kroger shows that incident, which Brown has admitted to.

Only after the incident did he activate his body camera.

Brown handcuffed the minor and took her to the office at the Kroger as employees gathered the items in a backpack she was carrying and rang them up. The minor was carrying about $53 worth of candy, soda, beef jerky and baby clothing, the report states.

As he was walking her back to the office, Brown, who is black, made a comment about theft in grocery stores to the minor, who is also black.

"You know what, sweetheart," Brown is heard saying on body camera footage. "This is why there's no grocery stores in the black community, because all of this is going on."

During this time, other officers arrive, and footage from their body cameras shows the girl crying and asking questions about the taser barbs still in her body. The girl was later taken to Children's Hospital and then released to her parents. She was initially charged with obstructing official business and theft, but Hamilton County Prosecutor Joe Deters later dropped those charges.

Footage from one officer's body camera shows that officer and another going out into the parking lot to talk with two women waiting in a white SUV because a Kroger employee says they may be related to the minor and "look like they're asking for trouble."

The officer questions that assertion — "Looking for trouble?" he asks. "Are they related to this incident?"

"Did he just tase a 10-year-old?" he is heard asking on the body camera footage as he and another officer walk toward the SUV.

The women just happened to pull up as Brown tased the girl and said they witnessed the incident.

"They did bad whatever the situation was," one woman says. "He didn't have to Tase her like that. He could have chased her down. When he told her to come back, she stopped. That's when he pulled his Taser out and tased her. I'm pretty sure she would have come back."

It is the second time this year questions have emerged about CPD use of Tasers on minors. In April, a CPD officer used a Taser on a minor near Hughes High School, which caused controversy. CityBeat has requested body camera footage and documentation of the investigation into that incident; CPD says that investigation is ongoing and the material will be released when it is finished.

Brown was placed on limited duty following the incident. He will face a hearing in the coming weeks, CPD  Chief Eliot Isaac told a Cincinnati City Council committee yesterday. While Isaac could recommend anything from coaching to termination for the violations of policy, CPD policy recommends up to 11 days suspension for deploying a Taser inappropriately. The rest of Brown's violations could trigger suspensions as long as five days under those recommendations. Brown has been dinged for prejudicial language before: He was reprimanded in 2016 for using a homophobic slur in his cruiser after interacting with a domestic violence victim, according to a report in The Cincinnati Enquirer.

Isaac said the use of the Taser seemed "unnecessary," but defended the department's policies around Taser use overall. Those policies allow use of the electric shock devices on people from ages 7 to 70, though they also stipulate that officers shouldn't use the Tasers on someone just because they are fleeing. Some Cincinnati City Council members believe those policies should be amended.

“Quite frankly, I believe the officer violated the policy,” Isaac told council. “It was unnecessary in this circumstance. We’ll take a close look (at department policy) as it relates to juveniles specifically.”