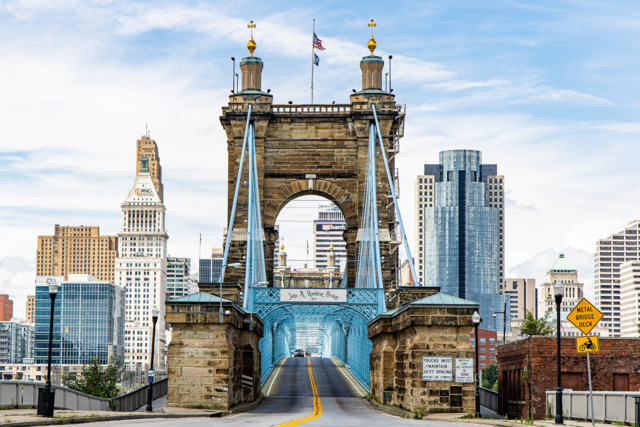 Photo: Hailey Bollinger
The John A. Roebling Suspension Bridge is slated to reopen this spring.

Another day, another bridge.

After Ohio Gov. Mike DeWine and Kentucky Gov. Andy Beshear signed a memorandum of understanding outlining plans to jointly apply for and use federal dollars to revamp the recently reopened but still sucky Brent Spence Bridge, Greater Cincinnatians may have some other good transportation news.

On March 12, the Kentucky Transportation Cabinet announced the John A. Roebling Suspension Bridge between Cincinnati and Covington is "on track" to reopen this spring. The bridge has been closed to vehicular traffic since Feb. 15, 2021, when it started undergoing a restoration project. Pedestrians have still been able to use the bridge's walkway during construction.

The Roebling was originally slated to reopen in November 2021, but the "restoration project continues as engineers work to design plans for additional repairs to address deeper masonry stone deterioration uncovered in a section of the archway during the project," says the KYTC in a release.

“Like the citizens and businesses in Covington and Cincinnati, we are eager to reopen the bridge, but we’re committed to doing it right by not cutting any corner that may compromise safety,” says KYTC District 6 chief district engineer Bob Yeager. (District 6 oversees the 11 counties in Northern Kentucky.)

“Repairing a structure this old sometimes means making necessary adjustments in repair plans to address things that can only be best seen once you’re ‘under the hood.’ Our consultants and crews are working as hard as they can to safely recommission this historic structure."

The Roebling opened in 1867 to connect Covington and Cincinnati and carries around 8,100 vehicles a day.

The bridge closed on April 17, 2019 due to sandstone fragments breaking off the east side of the north tower and reopened that August after the installation of protective netting around deteriorating portions of the bridge's upper towers. It also temporarily closed for two days in November 2020 "due to numerous and continued violations of the bridge's weight limits," a tweet from the Covington Police Department explained.

In June 2021, the Kenton County Public Library visited the bridge and recorded a video about its restoration.