People's Liberty CEO Eric Avner says he's leaving Joseph Acura because its parent company is "destroying the character and history of a part of downtown Cincinnati." It's difficult to imagine how demolishing a historic building could help an auto dealership make more money, but there is reason to believe the Joseph Auto Group's protracted effort to tear down the Dennison Hotel downtown will hurt the company, at least in the short term.

The family that owns Joseph Auto Group is currently adding to its long history of knocking down buildings on Main Street after winning a lengthy court battle against preservationists over the right to demolish the Dennison, which was designed by famed architect Samuel Hannaford's firm and constructed in 1892. As the roof is being removed and bricks are coming off the building's iconic "ghost sign," preservationists have increasingly called for boycotts of Joseph dealerships and are mocking the initial plan to create a small park where the building currently stands.

The ordeal has been covered extensively, but a brief recap: The Joseph Auto Group’s development company, Columbia REI, LLC, purchased the Dennison in 2013 from 3CDC, which had planned to develop it into affordable housing for veterans. Columbia did so at least in part to block affordable housing from being developed and rebuffed attempts by outsiders interested in purchasing and saving the property. The building housed tenants as recently as 2011, the city's urban conservator emphatically argued that it was worth saving and the Historic Conservation Board agreed.

The company and its high-powered lawyers, Francis Barrett and Tim Burke, appealed the board's ruling, draped the building with a tarp as if it were about to fall down, won the appeal with the Zoning Board of Appeals and soon after began taking the top off the building.

Which brings us to Monday’s social media post by Eric Avner, CEO of prominent philanthropy organization People’s Liberty, detailing why he’s going to stop patronizing Columbia Acura after nine years of satisfactory service on his car. People’s Liberty is a well-funded “philanthropic lab” that mentors and funds individuals whose projects it believes address challenges and uncover opportunities that make Cincinnati better. Avner was also a vice president of the Haile/U.S. Bank Foundation in 2014 when it was instrumental in helping fund streetcar operations.

In a letter to Joseph Auto Group General Manager Karl Stewart, Avner wrote: “Due to the well-publicized actions of the owner of your parent company, Joseph Auto Group, acting as Columbia REI, to demolish the Dennison Hotel and with it destroying the character and history of a part of Downtown Cincinnati, I can no longer support the Joseph Auto Group with my business.”

He also copied six other Josephs who work for the dealerships and Columbia's lawyers. Avner will take his business to a Columbia competitor, he says, and will not buy his next car from any Joseph dealerships. Avner posted a copy of the letter on all of his personal social media channels, which he says “extend to several thousand other customers.” 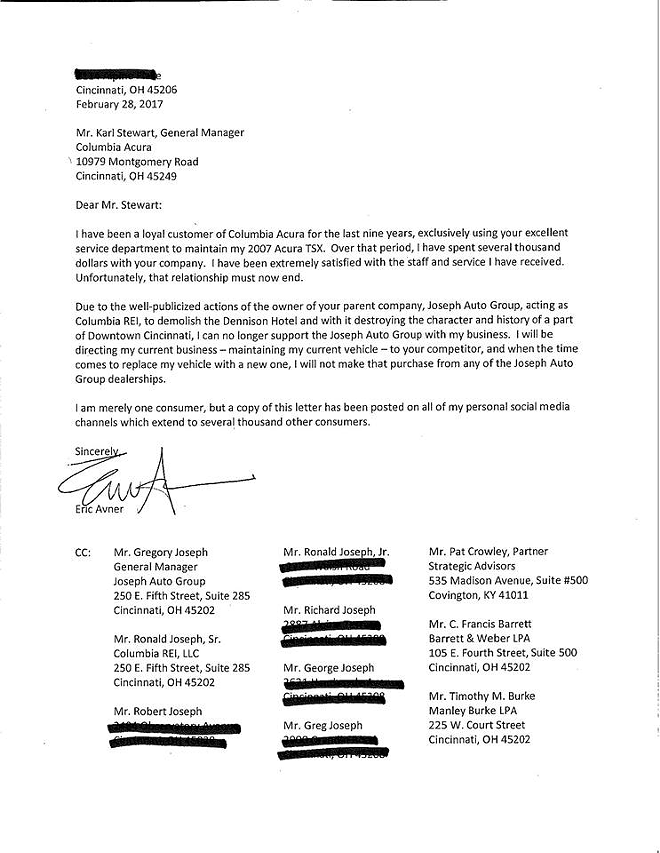 In less than a day the post had been shared more than 20 times on Facebook, and commenters say they'll also leave the Josephs’ Volkswagen, Subaru and Acura dealerships. Others are using the hashtag #BoycottJosephAuto and have protested outside the demolition site off and on for weeks. Joseph Auto Group owns at least 20 dealerships.

Columbia says it wants to to create a site that will attract a Fortune 500 company, which is the same thing the company said during the 1980s when it knocked down other buildings on the block. In an ethically dubious editorial supporting demolition published by the editorial board of the Cincinnati Enquirer, which gets thousands of dollars in advertising revenue from the Joseph Auto Group, Ron Joseph said, “I believe Cincinnati itself has attracted interest throughout the United States and is well-designed for Fortune 500 prospects.”

The short-term future of the Dennison site will reportedly be some sort of park, which has prompted people on social media to create a satirical park map of “Dennison Park aka the Place Where Veterans in Need Could Have Lived,” which details things like “parking for Joseph & friends,” “putting box” and “John Cranley for mayor (donation box).” 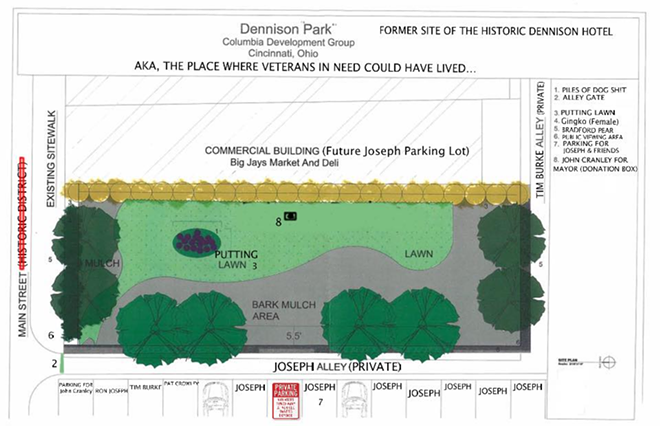 The image was posted to a “Save the Dennison” Facebook page, where preservationists and activists have shared information for months while attempting to save the building. It has more than 1,000 members, some of whom are pretty good at Photoshop.