Kenton County Judge-Executive Kris A. Knochelmann has declared a regional state of emergency in the area around the damaged and currently closed Brent Spence Bridge.

The executive order allows and orders Kenton County agencies to cooperate with the Office of Homeland Security Emergency Management and the Kentucky Transportation Cabinet, as well as waives "procedures and formalities" to allow the "appropriation and expenditure of public funds" for the equipment and workers needed to repair the bridge.

Around 2:45 a.m. on the morning of Nov. 11, a semi truck jack-knifed on the lower deck of the Brent Spence Bridge before colliding with a truck carrying caustic potassium hydroxide. The crash — and trucks' diesel fuel — ignited a fire that burned for about two hours. No injuries were reported.

Engineers and inspectors had to wait for the bridge to cool after the fire before surveying the damage.

9:45 Update: Debris has been removed from the bridge & reps from @KYTC, @ODOT_Statewide, FHWA & 4 consultant teams are on the bridge now for a walkthrough. An inspection will begin soon. #BSBUpdates pic.twitter.com/hDAS6HFKzm


Kentucky Gov. Andy Beshear said during a press briefing that the public should expect the bridge to be closed for at least several days, but to "be prepared for significantly more disruption than that."

The Covington Police Department has also closed the nearby Roebling Suspension Bridge after continued weight limit violations by drivers seeking an alternate route around the Brent Spence.

According to a police department Facebook post regarding the closure, the was made to "ensure the safety of commuters and the integrity of the bridge."

EFFECTIVE IMMEDIATELY: ROEBLING SUSPENSION BRIDGE IS CLOSED. Due to numerous and continued violations of the bridge's...

Head to ohgo.com to find an alternate route to or from Northern Kentucky.

And read the full emergency order below: 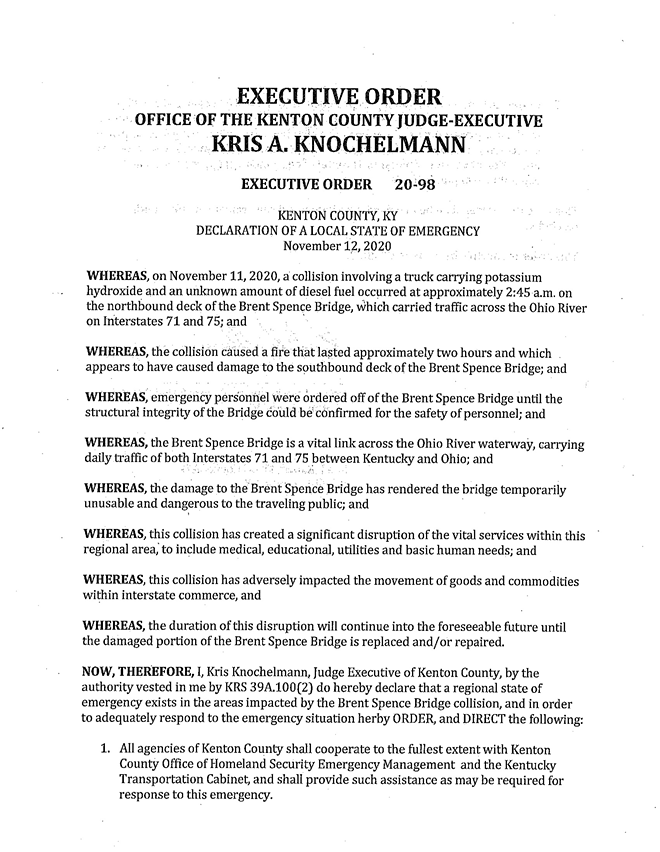