After a night of confusion, Ohio's primary election was postponed. It isn't entirely clear what comes next and whether the governor's preferred June 2 makeup date for in-person voting will materialize. 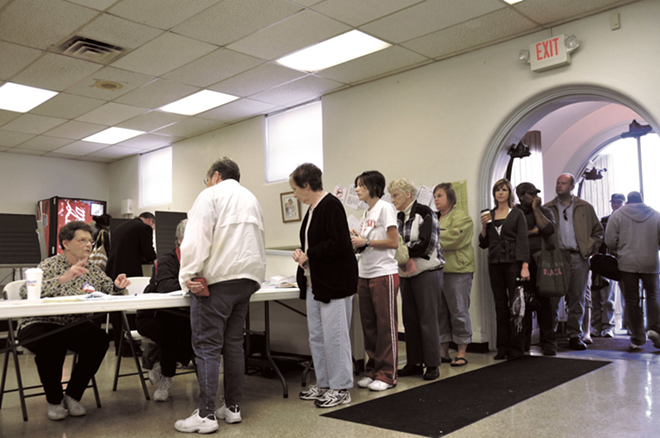 CityBeat Archives
A line at a local polling location

If you thought the cliffhanger coronavirus COVID-19 triggered on the eve of Ohio's now-postponed primary election was over, well, buckle up.

The Ohio Democratic Party and a woman from Reynoldsburg are suing Ohio Secretary of State Frank LaRose in the Ohio Supreme Court over the move canceling in-person voting yesterday, saying that there should be mail-in voting until April 28.

“Yesterday’s actions did not create unchecked authority with the governor or secretary of state to run a new election," Ohio Democratic Party Chair David Pepper said in a statement. "So authority for a new election must come from the legislature or from a court. Today’s action seeks that court order, preserving the primary while also proposing a more workable window for the election to take place, along with multiple opportunities and a reasonable amount of time for voters to vote."

DeWine's initial proposal was to have absentee voting until June 2, followed by in-person voting that day.

Plaintiffs Kiara Sanders and the Ohio Democratic Party argue that LaRose has no power under state law to set the election date and that state lawmakers must do that instead. That could happen next week.

Ohio Gov. Mike DeWine yesterday announced his intention to close polls today (March 17) over growing fears about the spread of COVID-19. The Ohio Department of Health today said there were 67 confirmed cases of the virus in Ohio that have caused hospitalization for 17 people.

DeWine couldn't stop voting on his own, however. Instead, an 81-year-old Franklin County resident filed a lawsuit against the state in the county's common pleas court. DeWine asked Ohio Attorney General Dave Yost not to contest the lawsuit, but the Franklin County judge hearing the case declined to allow the election to be extended.

Afterward, confusion spread as to whether or not the election would move forward, in part fanned by a statement released by DeWine and LaRose standing firm that voting should be postponed.

Ohio Health Department Amy Acton then ordered polls closed just eight hours before voting was to begin, citing the department's powers under the Ohio Revised Code to prevent the spread of disease and fear of the virus' quickly-escalating growth.

The Ohio Supreme Court rejected a challenge to DeWine's move at about 5 a.m., clearing the last possible challenge for the postponement of in-person voting in Ohio.

DeWine said that new guidance from the Centers for Disease Control and Prevention against gatherings of more than 50 people made safe in-person voting impossible and argued that leaving polls open would make those at high risk of serious illness from the virus choose between their democratic rights and their health.

What happens next is unclear. DeWine and LaRose have said they expect legal challenges to their actions and to the suggested June 2 in-person voting day.

As the Ohio Supreme Court considers the Democratic Party's lawsuit, the Ohio General Assembly will meet next week to set a new date for the primary.

Ohio House Speaker Larry Householder wrote in a memo to other lawmakers that he wouldn't call them in for a session this week, but would settle the issue in sessions scheduled for Tuesday, Wednesday and Thursday.

State lawmakers on both sides of the aisle criticized DeWine for his decision, or at least the timing of it.

There are signs the impasse could resolve itself. During a briefing on COVID-19 today, DeWine said he's not completely against the possibility of mail-only voting.

"We're open to discussion," he said when asked about the idea.