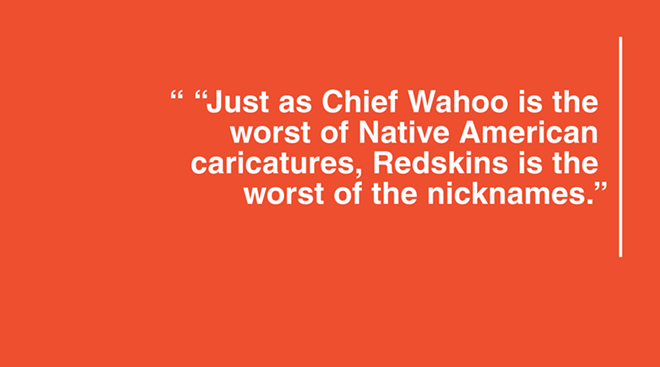 Disparaging. Pejorative. Dated. Taboo. Offensive. Do you sort of get the common message of those words?

Those 15 terms — but wait, I can actually give you five more: Disrespectful. Demeaning. Stereotyping. Inappropriate. Racist.

Those 20 terms, and probably even a few more, virtually leap at you during a web search on the definition of the term “Redskin.” I didn’t have a specific goal to collect them, but I kept seeing the different words saying basically the same thing, so I grabbed a pen and in 20 minutes I had a basketful. Grabbed one every 60 seconds.

And so, Anderson Township — you prosperous East Side suburb where about 93 percent of the 45,000 are Caucasian — are these the words you want associated with your community? Likely not, but that is surely going to be the case as long as your high school keeps Redskins as its mascot.

The school is surely the most well known institution in the township, with a big sports program, and nicknames are banner identities for schools.

The Anderson nickname is back in the public eye this month as a local sidebar to the news that Major League Baseball has pushed the Cleveland Indians to retire their blatantly offensive — or any of the other 19 terms listed above — mascot named Chief Wahoo. The Chief is a humiliating rendering of a Native American, with a huge and vacuous grin that viscerally embodies derision (word No. 11 above). It suggests an absolute lack of cultural gravitas, much like 100-year-old portrayals of obsequiously smiling African-Americans, and it has for many years been on the extreme edge of iconography regarding a diverse ethnic group. (I wrote an Enquirer column about 27 years ago calling for the Chief to be retired, so it’s nice to see MLB promptly acting on that.)

And so it should be that Anderson faces what one school official called “another wave” of protest over the decades-old nickname. Just as Chief Wahoo is the worst of Native American caricatures, Redskins is the worst of the nicknames. Way worse than “Indians.” If you just have to stereotype (word No. 18) all Native Americans into a mascot, maybe you can still get away with Indians. The term carries no value judgment, and using The New York Times as my guide for respectful style, it seems that Native American groups are more comfortable now than some years ago with being generally described as Indians. But bottom line, it really makes no more sense than nicknaming your team “Caucasians.”

To a lesser degree, maybe you can still get away with “Braves.” You shouldn’t, let’s be clear about that, because it relates too much to a time when the white ruling class considered Indians as nothing more than warlike enemies. But at least Braves denotes a specific identity within the culture’s history, and one with traits of courage that are easily adaptable into a sports theme.

But Redskins? Oh, goodness no. Oh no, you can’t go that route any more, and if you have any respectful inclusiveness in your hearts, you’ll drop it by lunchtime today.

Particularly interesting from my web scan was a Merriam-Webster dictionary site designated for “English Language Learners.” In addition to defining words, this site attempts to provide usage tips to people not raised in our language and culture. So in addition to simply calling Redskin a term for Native American, it adds, “The word is very offensive and should be avoided.”

And why is Redskin such a particularly egregious way to objectify the Native American diaspora? Because — and this also jumps at you from multiple web sources — the term has a thick root in the 18th-century practice of authorities paying people to kill Native Americans and accepting scalps — called “redskins” — as proof of said service.

One source among many on this is Baxter Holmes, a Native American who wrote for Esquire in 2014 under the headline, “A Redskin is the Scalped Head of a Native American, Sold Like a Pelt, for Cash.” Here’s an excerpt from Holmes’ piece:

“The story in my family goes that the term dates back to the institutionalized genocide of Native Americans, most notably when the Massachusetts colonial government placed a bounty on their heads. The grisly particulars of that genocide are listed in a 1755 document called the Phips Proclamation, which zeroed in on the Penobscot Indians, a tribe today based in Maine.

Spencer Phips, a British politician and then Lieutenant Governor of the Massachusetts Bay Province, issued the call, ordering on behalf of British King George II for, ‘His Majesty’s subjects to Embrace all opportunities of pursuing, captivating, killing and Destroying all and every of the aforesaid Indians.’ They paid well — 50 pounds for adult male scalps; 25 for adult female scalps; and 20 for scalps of boys and girls under age 12.

These bloody scalps were known as ‘redskins.’”

Holmes went on to note that if the NFL’s Washington Redskins, the national standard-bearers for this slur, desired a truly accurate mascot, “it would be a gory, bloodied crown from the head of a butchered Native American.”

Maybe Anderson would like to consider a similar redesign?

More seriously, it’s not like Anderson hasn’t already implicitly conceded it’s stuck with a stinky product. Some years ago, the school dropped its practice of having a live mascot in a Redskin costume appear at sports events. Now why in the world would they have done that if they didn’t know it was offensive? And as the slavers of the 19th century knew, to admit even the slightest problem with one’s “peculiar institution” is to immediately open inquiry into it being rotten to the core.

For sure, you can find sources that claim Native Americans actually coined “Redskin” themselves. And any Anderson decision to retire the nickname will be met with briefly fiery protests from the minority that just doesn’t get it.

But I find the origin claims unconvincing. I see much more evidence that whites were the prime movers, easily adding “red” to a dialect that was already heavily invested in making an ultra-sharp demographic distinction between “white” and “black.”

And I find it almost sickening when whites get all huffy and say they are “honoring” Native American “traditions.” Their efforts largely are sentimental paeans to the myth of the “noble savage,” and baldly Eurocentric.

Anderson’s use of Redskins dates to the 1930s, and the Enquirer noted that the school district website says the idea for the name was adopted from Miami University in Oxford, which was alma mater to many Anderson faculty. But the university was smart enough to change Redskins to RedHawks more than 20 years ago, and I think it’s safe to say that about 98 percent of the greater Miami regional base is very happy with that change.

I’ve seen some Anderson officials trying to duck this latest wave by protesting that “bigger issues” need to be addressed. I could not agree with them less.