“Light painting and graffiti are very similar,” says Matt Treece, 23-year-old local photographer and light painter. “I realized this when I found myself hopping through a shattered first story window on the backside of an abandoned factory on the East Side at 2:30 a.m., alone, with my backpack on, creeping around in the darkness looking for a good spot.”

Treece is searching for that “magical spot.” He doesn’t risk the charge of vandalism like graffiti artists, but he still risks a trespassing charge with every foray into the night.

Light painting is a photography technique that involves moving a camera or adding a light source while operating with a slow shutter speed. The resultant images include colorful, swirly lines and other creative effects. Like graffiti artists, “both of us trespass illegally. Both of us are night owls. Both of us have explored tunnels, creeks, bridges and abandoned buildings and have gained such a good understanding about the layout of the city,” Treece says.

Suffice it to say, Treece’s understanding of all the nooks and crannies of the city is far more in-depth than the average daylight city dweller.

Before his nightly jaunt into the darkness, Treece packs his equipment bag. At first glance, you wouldn’t think anything is out of the ordinary. Treece stuffs a Nikon D90 camera, remote shutter release, Nikon SB-600 Flash and two tripods into the main compartment of the bag. But the smaller compartments receive the stranger tools of the trade. 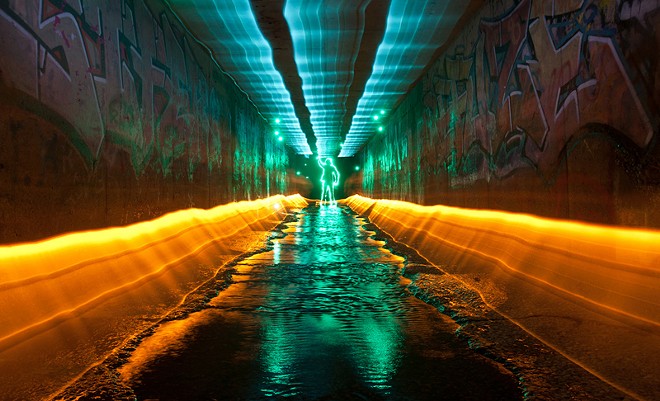 All that’s missing is the party favors. At this point, it’s almost unclear if he’s going to a rave or going out to light paint.

Treece almost forgets the most important tool: batteries — lots of them.

Light painting hasn’t always been Treece’s passion, however. “I’ve always been interested in art, but my interest in light painting started sometime around May or June of last year,” he says. “I was browsing the Internet randomly and saw a picture of what looked like a spinning waterfall of sparks. I had seen light painting prior to this photo, but it really didn’t click that these [light painters] were using super long exposures and crazy light sources to create works of art.”

That night, Treece spent hours reading up tutorials on the website lightpaintingphotography.com and a particular online community that called itself “the light junkies.” There he learned that it was plausible to make his own contribution to the light painting community.

Not all places are created equal in the light painting community. Living in Cincinnati is both wonderful and a pain. Clifton Heights, Treece’s main stomping ground, provides him with an incredible amount of light pollution, which can be attributed to the area’s attempt to curb crime activity.

Cincinnati still provides an ample amount of opportunity to create. “[Cincinnati] has some of the most bad-ass tunnels built in the early 1900s. … Cincinnati also has a creek system, which over time had to be cemented because of industrial waste,” Treece says. “These tunnels and channels have created some of the best spaces for light painting.” 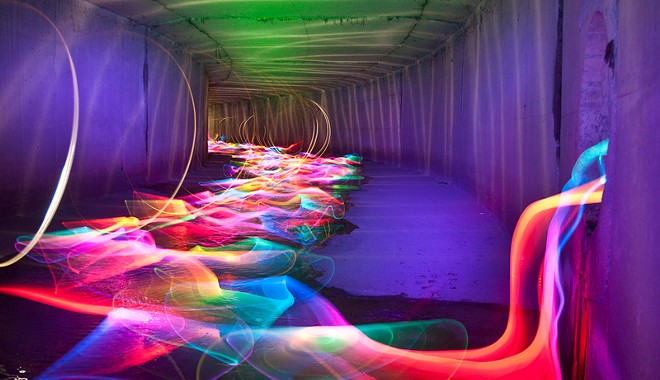 “It’s surreal standing in a tunnel underground in the absolute darkest of dark, alone, listening to your heart race in your chest, “ he says. “A lot of times it feels like I’ve entered into another dimension. I truly think light painting has made me become addicted to the adrenaline rush, just like a base jumper would feel, knowing I could potentially be injured, hurt or lost forever.

“A lot of times, I like to think about all the people sound asleep in their beds as I trudge through nasty underground water in search of whatever adventure lay in store ahead of me,” he says.

It would seem, for many, the risks would outweigh the reward. The risk of injury, prosecution or even death would turn many away. Add darkness to the mix and a psycho killer and you’d have a horror movie.

But for Treece it’s much deeper than the risk of physical harm or punishment. It’s about finding a center in his life.

“I have always loved creating things. I’ve found throughout my life that I have trouble focusing on many regular everyday things in my day-to-day life,” he says. “But, when it comes to art, my mind focuses and I get into the zone. Pure focus and happiness.”

For all of Treece’s risk and work, there is a positive outcome. A reward. A magical moment. A time when Treece steps back and feels a small sense of accomplishment. 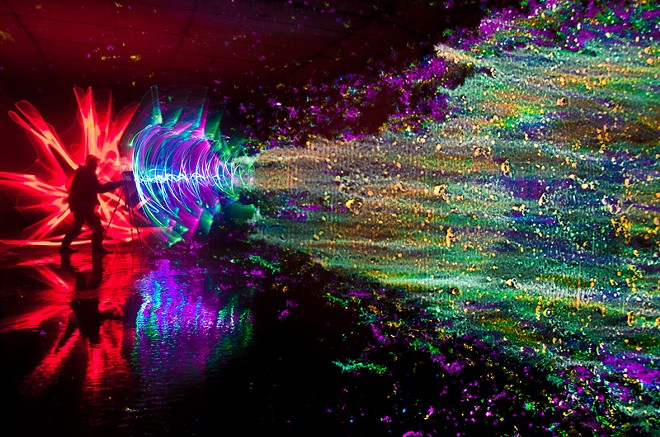 “In my case, I look at my digital screen on my camera and have that moment where I gasp; lose my breath; tummy tingles; my mouth begins to salivate and yell out in joy,” he said. “Because when you were ‘doing it’ you’re not viewing it in the same perspective as you would when you’re fully finished.”

The similarities between graffiti artists and light painters reemerge.

“We both step back, look at what we’ve just accomplished and get the chills, because this artwork just came through from another place or time,” Treece says. “It just bursts through your minds and hands and created this whole new thing that now exists in reality.”