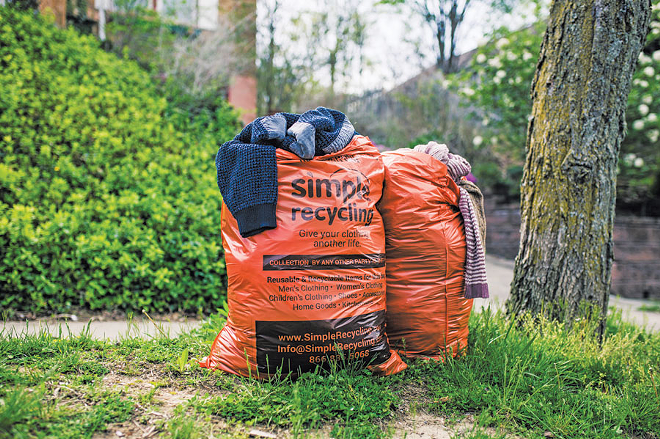 When the city of Cincinnati rolled out a new curbside textile recycling program in March, it appears to have done so with the best of intentions — to conveniently reduce the amount of textiles that end up in landfills while putting a little coin in the city’s coffers.

The organization behind the program is Simple Recycling, a for-profit company that picks up unwanted textiles for free, then sorts and ships the items to various places based on quality. Some are sold to local thrift stores, others in international markets. The worst-off are processed for raw materials, the company says.

But local nonprofits say the convenience of “recycling” these items in this manner has negative side effects for their organizations, which rely on donations of reusable clothing and other household items. If Northside Jane tosses the result of a spring closet purge into her orange bag — provided for free by Simple Recycling — and takes it to the curb instead of dropping it off at Goodwill, that’s a dozen or more items the nonprofit could have received and resold.

“It’s hurting the programs that we have that are helping people in Cincinnati,” says Michael Flannery, public information officer for Ohio Valley Goodwill Industries.

Nancy Beauchamp runs the Salvation Army’s Adult Rehabilitation Center and Family Stores, where proceeds from the stores support the rehab center and provide residents with recovery work. She says the organization started seeing a decline in donations weeks before Simple Recycling began operating in Cincinnati.

“We’re losing about 6,000 clothing items a day,” Beauchamp says. “I think people were holding on to their clothes to give to (Simple Recycling), to try it out since they’re new.

“We’re not saying they’re bad — it’s good for the environment what they do. But we’ve won awards for recycling and how we help the environment, and we’ve got five or six other things we do with your donation.”

Simple Recycling is upfront about its for-profit status and shows pride in its mission: to “make it simple to dramatically reduce the 40 billion tons of clothing in the nation’s municipal waste stream through our free, easy and simple curbside collection program.”

The company pays the city of Cincinnati to operate here. According to Larry Falkin, director of the Office of Environment and Sustainability, the city stands to earn or save a total of $70,000 in yearly revenue — $20 per ton from Simple Recycling, $25 per ton in avoided landfill disposal costs and $25 per ton from Hamilton County’s Residential Recycling Incentive program.

“What is even more encouraging is that local organizations collecting donations of clothing benefit from Simple Recycling’s entry into the marketplace by the increased exposure textile recycling and donation options,” it reads.

But that’s not exactly what Simple Recycling’s data shows. In the communities where the company operates (which aren’t listed in the case study and for which no individual data is presented), donations to nonprofits dropped 2.58 percent in 2013 — the year Simple Recycling began operating — and .7 percent in 2014 before leveling out in 2015.

The case study then presents data from three nonprofits in communities where Simple Recycling doesn’t operate: in Central Indiana, Southeast Michigan and Northeast Ohio, all of which saw steep declines in donations.

But Simple Recycling doesn’t say why it chose those three out of the hundreds of clothing donation nonprofits operating in the United States, why they lost donations, or how the three individual cases shed light on the industry as a whole.

Simple Recycling all but admits nonprofits in communities where it operates have seen declining donations, though it does so while implying that its presence has slowed those declines.

“In communities where Simple Recycling has launched and operated, there is a significant reduction in the decline of charity donation pickups,” the report reads. “This can be attributed to the increased exposure to ‘alternatives’ to throwing clothing in the trash.”

No data from before the company’s entry into the market, user surveys s or other evidence is presented to back up this claim.

On its website, the company encourages people to also donate to nonprofits, listing the website of another organization that will pick up similar items for those organizations.

“We have seen no negative impact on local charity clothing donations programs,” says Adam Winfield, Simple Recycling founder. “Since all charities capture only 15 percent of clothing, there is a huge gap in service for this significant environmental program.”

In a memo to Mayor John Cranley and members of City Council last June, City Manager Harry Black backed the deal for its environmental benefits and seemed to buy the claim that other cities hadn’t seen a drop-off in donations to nonprofits.

“No significant reduction in charitable donations has occurred in other municipalities that have launched curbside textile collection,” the memo read.

City Councilman David Mann says he never heard anything about the program, however.

“The first I heard of the program was when I got an orange bag at my home,” Mann says.

Cities pairing up with for-profit curbside recycling companies is a growing trend. Simple Recycling currently operates in Akron, Ohio, Lansing, Mich., and Austin, Texas, along with dozens of smaller communities. Other companies like Community Recycling in Newtown, Pa., and United Fibers in Queen City, Ariz., are doing the same thing. The situation has come to a head in Austin, Texas, which began its partnership with Simple Recycling in December of 2016. On Feb. 2, its City Council voted to instruct the city manager to collect donation data for the next six months. Austin has a three-year contract with the company.

“We believe that the city should be looking for homegrown solutions that ensure we are meeting all of the goals of our community, not just zero waste,” Goodwill’s Senior Vice President of Community Engagement Traci Berry said after Austin City Council decided to continue its contract, according to the Austin Chronicle.

As opposed to for-profit companies, Goodwill and Salvation Army are nonprofit entities that specialize in providing programs such as drug rehabilitation services, employment opportunities and job training services for people with disabilities and homeless veterans — tax-deductible donations of textiles and housewares help to fuel those programs.

Ohio Valley Goodwill Industries has more than 30 drop-off locations around the city of Cincinnati. According to Ohio Valley Goodwill’s website, the total number of individuals served in 2015 was 3,532 and the total placed in community employment was 919. They served 900 veterans in 2015 and recycled more than 49 million pounds of donated material as well as cardboard, steel and office paper.

Flannery of Ohio Valley Goodwill argues that Simple Recycling is diverting economic resources away from local charities that operate in the area.

“Simple Recycling isn’t disguising their cause at all or their mission — you know, it’s a for-profit company, there’s nothing wrong with that,” he says. “But they contract with the city, and they get like a penny a pound. And every pound that they pay is going to make somebody money. … So when people put stuff in orange bags and put them on the sidewalk, they have a choice. They can do that and get somebody rich, or they can donate to Goodwill, or St. Vincent de Paul, the other folks who take clothing and other household items, and help people here in Cincinnati who need help.”

Councilman Mann says he will keep an eye on how the situation plays out both here and in Austin, Texas.

“I’ve seen some speculation that this has had some adverse effects on charities, and I have no idea whether that’s true or not — it’s worthy of consideration,” Mann says. “We’ll bring the issue before my committee — the neighborhoods committee — and make sure we understand the facts and see where we should go.” ©