Local Officials Affirm Roe v. Wade, and 8 Other Cincinnati Stories You May Have Missed This Week

Catch up on the SCOTUS leak, the primary election and a potentially poop-filled truck at Great American Ball Park. 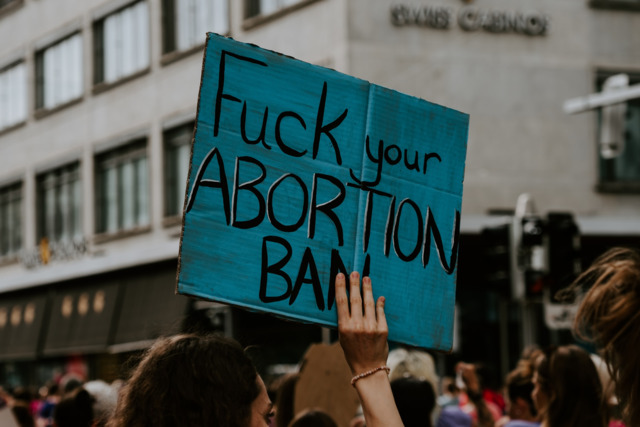 Photo: Claudio Schwarz, Unsplash
Abortion-rights activists are stepping up their mobilization in the wake of a leaked U.S. Supreme Court draft that would overturn Roe v. Wade.

It was the week that felt like a year.

There's a brouhaha brewing after a draft of a leaked U.S. Supreme Court opinion that would overturn Roe v. Wade was confirmed. The draft, which arrived ahead of the court's decision that's been expected this summer, could criminalize people in states with "trigger" laws banning abortion and could even affect previously upheld court decisions regarding privacy. For now, though, abortion is still legal. Catch up on the big headlines below.

Ohioans Determine Primary Winners for Governor, U.S. Senate
Ohio is in a bit of a boondoggle this election season due to the controversy surrounding district maps for state legislative races. But on May 3, residents voted in primaries for some major races that ultimately will be determined later this year. Democrat Nan Whaley, the former mayor of Dayton, will battle incumbent Republican Gov. Mike DeWine in the gubernatorial race this November, while Republican J.D. Vance and Democrat Rep. Tim Ryan will go head-to-head for the U.S. Senate seat that Rob Portman soon will vacate (this, despite Vance being endorsed by a former U.S. president who didn't even know his name). Catch up on election news in CityBeat's news section.

Regional Leaders Plan for Abortion Fight After Roe v. Wade SCOTUS Leak
On May 2, the eve of Ohio’s primary election, Politico reported on a leaked draft opinion from an unidentified U.S. Supreme Court clerk that suggested a majority of the court will vote to overturn the 1973 case Roe v. Wade that legalized abortion. Since then, leaders in Cincinnati and beyond have denounced the draft and shared what they'll do to help protect the bodily autonomy of people who are pregnant. Attorneys in Kentucky also have shared what the Commonwealth's "trigger laws" would do if Roe is overturned. Read CityBeat's story for what Cincinnati's mayor, council member and others have said.

Cincinnati Mayor Aftab Pureval Named One of 2022's 100 Most Impactful Asian and Pacific Islanders by National Group
Pureval is ringing in Asian American and Pacific Islander Heritage Month with some new accolades, with Gold House's including the mayor for his activism, advocacy and policy work. Other recipients include actor Simu Liu (Marvel's Shang-Chi and the Legend of the Ten Rings), Olympic gold medal-winner snowboarder Chloe Kim and DoorDash co-founder Tony Xu. Read CityBeat's story about why the Gold House list is important.

Watch: Man Attacks Comedian Dave Chappelle on Stage at Netflix Is a Joke Festival
Dave Chappelle was bum-rushed by a guy at a comedy show. There's no other way to say it. Isaiah Lee had reportedly charged at Chappelle, who was performing a stand-up act at the Hollywood Bowl during the Netflix Is a Joke comedy festival on May 3, and tackled the comedian. And then Jamie Foxx came out in a sheriff's hat, for some reason. Watch a video of the attack and read CityBeat's story about what the comedian and his famous friends did next.

Cincinnati Cyclones End Playoff Run, Reds Notch Yet Another Loss
This week wasn't the best for Cincinnati sports fans. The Cyclones tried their best in a run at the ECHL's Kelly Cup, but the Toledo Walleye won the final game of the semi-finals. On the other end of the spectrum, the Reds are about as far from playoff action as can be with loss after loss and the MLB's worst record. The situation is so dire that some fans even are considering pooping in the promotional Toyota Tundra at Great American Ball Park. Catch up on the biggest fan concerns in CityBeat's sports section.

Listen: Bootsy Collins and Buckethead Release Two New Songs to Benefit Ukraine
"Sunflowers" and "Dancing in the Snow" are available now with a donation to support Matthew 25: Ministries, which is shipping humanitarian aid and conflict relief to Ukraine and surrounding areas. The songs will be released worldwide at a later date. Read CityBeat's story about how to get the songs.

Cincinnati Legends The Afghan Whigs Announce Show at Bogart's
One of Cincinnati's greatest musical exports is finally coming home. The tour supports How Do You Burn?, the Afghan Whigs' first studio album in five years. The album is scheduled for a Sept. 9 release, but the debut single "I'll Make You See God" dropped in February. Read CityBeat's story about how to get tickets to the Whigs' show at Bogart's.

Gifts Around Cincinnati You Can Get for Every Type of Mom in Your Life for Mother's Day
If you're still at a loss for what to give that influential person in your life – however you define them – check out our suggestions from the shops and services readers voted for in CityBeat's 2022 Best Of Cincinnati®. Read CityBeat's story for where to get those last-minute gifts around the Queen City.