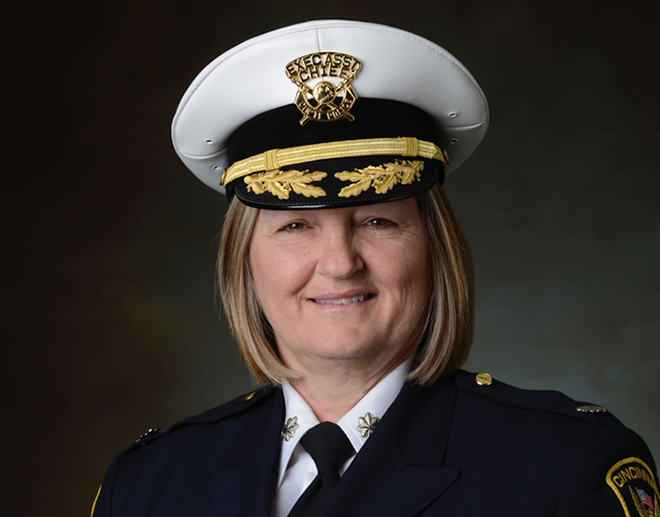 The Cincinnati Police Department will have a new leader this week.

"City leaders recognize that there's no glass ceiling at City Hall, so I applaud them for that," Theetge said during a Feb. 16 press conference. "I look forward to being the first female and showing that I can do it just as well as a male counterpart can do it, but I also look forward to the day when race or gender is not part of the conversation but rather who's the quality candidate for the job."

Isaac, the Cincinnati Police Department's longtime chief, will retire after his final day on March 1. He first announced his retirement plans in June 2021, but at that time did not provide a timeline other than to suggest that it would be early this year.

On Feb. 9, Isaac said he would leave the position in March, but that his last working day would be Friday, Feb. 18.

"We have very talented homegrown people," Isaac said Wednesday. "I want the citizens of Cincinnati to rest that they are well in hand, that the principles and the work that we've done will continue in the interim and will continue in the future. I'm fully, fully proud of this agency."

Cincinnati's city manager has the authority to appoint a new police chief, and Curp will conduct a national search to fill the position. The city is selecting from potential consultants to aid the search, and Isaac will assist Curp as well.

In a Feb. 16 release, Curp said that though the search for Cincinnati's next police chief is a national one, the city encourages qualified local candidates to apply.

According to the city's anticipated hiring timeline provided in a statement, Cincinnati will recruit national candidates in June and bring candidates to Cincinnati for the first round of interviews in July and August. Those will be followed by more interviews for finalists plus public sessions. Curp will make the final decision.

"I fully anticipate that this process will produce candidates that the entire city can stand behind as and will produce the best leader for the Police Department," Curp said.

When asked Wednesday if she might consider trying to make her new interim police chief role permanent, Theetge said that's a conversation for later.

"I think one thing law enforcement has taught me over 30 years is you take it one day at a time. My concentration right now will be leading this agency during the interim process and assisting the city manager in any way that I can in the search or whatever may come my way," Theetge said. "But never say never. We'll see what the future holds."

Isaac has been with the CPD since 1988, becoming a captain in 2004 and District Four commander from 2007 to 2012, his bio says. In 2015, he became interim chief when former city manager Harry Black fired former police chief Jeffrey Blackwell. (Black departed in 2018 during the "Gang of Five" texting scandal.)

"Thirty-three years. What an amazing journey. Sometimes you're just left in awe of a career like this," Isaac said Wednesday. "Thirty-three years is a long time, and I believe it's time for others to have the opportunity to lead this organization."

After joking that he may find more time for fishing and golfing during his retirement, Isaac said he won't disappear from public view.

"By no means am I done. I love this city. I'll be back in some capacity, somewhere," he said.