Indianapolis-based Birge & Held is working to purchase the Arts Apartments, a 248-unit building in the West End with a significant number of subsidized units. If the deal is successful, the company says it will keep the apartments affordable. 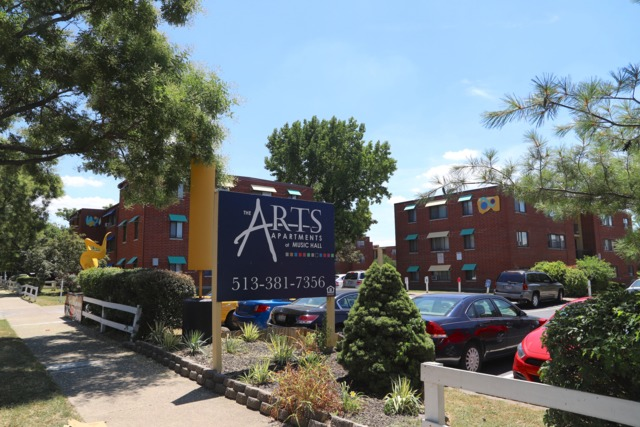 Residents at the West End's Arts Apartments at Music Hall — actually about a mile away from the Cincinnati landmark on Ezzard Charles Drive — say they like living in the 21-building, eight-acre complex.

The community is tight-knit, residents say. It’s mostly a quiet place, and people know each other well and tend to take care of the building. A resident named Miss Margaret even plants roses around the complex.

Many residents are elderly, some facing health concerns, and a number were born in the West End. Some remember the demolition of the neighborhood’s southern half in the early 1960s. Others lived in Laurel Homes and Lincoln Court, now-demolished public housing that once existed farther east on Ezzard Charles.

Now, they're worried, because the complex some of them have lived for decades is up for sale as bigger changes seem to be coming to the West End.

The developer looking to buy the Arts Apartments, however, says they would like to keep the apartments affordable — if the deal goes through.

Indianapolis-based developer Birge & Held has entered into a contract to buy the Arts Apartments, formerly known as Richmond Village, and is currently conducting due diligence on the site.

The 248-unit complex was built in 1962 as affordable housing using funding from the U.S. Department of Housing and Urban Development. The complex currently has a site-based HUD Housing Assistance Payment contract covering about a third of the units. That contract provides subsidized rents to eligible residents, many of whom are low-income African-American seniors. The building’s HAP contract expires in 2020.

That contract is a key part of the new buyer’s plans for the building, Birge & Held’s Tallal Shakarchi says. Eventually, the company would like to apply for Low-Income Housing Tax Credits to renovate the property. LIHTC financing allows developers to leverage tax credits to raise capital for projects. In exchange, the developer must keep the developments affordable for up to 30 years.

“I’ve lived in the Arts Apartment complex for the past 24 years,” Arts Tenant Association board member Melvin Griffin says. “While I was there I single parented four children. It’s been a nice place to live, and I’d like to continue living there at a decent rate of rent and not have a bunch of people relocated or moved out. Basically, the tenant’s organization was founded to distribute information to everybody that is accurate, and to manage the expectations of the tenants and to work with the new and outgoing ownership."

A couple dozen residents attended recent meetings by the complex’s tenant association to say they were worried about being displaced under new ownership.

“I’m a product of the West End,” resident Liz Murphy says. “I went to school at Hays Porter and Taft. I grew up on Ezzard Charles Drive. I want to remain down here. I have easy accessibility to my job. My church is right up the street — the only church I’ve ever belonged to. My main concern is affordable rent. I am working, but you could have a job this week and not have a job next week. Nothing is sacred these days when it comes to employment.”

Some residents like Griffin have lived here for decades, while others just arrived this year. Newcomers say they were attracted to the complex because it is affordable and centrally located.

Stanley Williams has lived at the Arts for two years.

“I came here because it was affordable and it’s close to work,” he says. “The place I came from was the same kind of thing. I was there 23 years. But it came under new ownership. The owners decided to bring everything up to market value, and the rents rose by $200 a month. That didn’t include utilities. I had to leave. It was no longer affordable to me. But this place is, and I like it.”

Ezzard Charles Associates LP, which lists addresses in St. Louis and Irving, Texas, currently owns the property, according to the Hamilton County Auditor. Should the deal with Birge & Held fall through, the building will likely go back on the market.

This summer, the owners issued a 76-page purchasing memorandum from brokers Affordable Housing Advisors of Marcus & Millichap, which touts the property’s location in the West End and its overall condition. The apartment complex received an 82 percent on a HUD REAC inspection last year.

The document notes the property’s potential eligibility for Low-Income Housing Tax Credits for rehabilitation. It also devotes a page to the coming FC Cincinnati soccer stadium on the neighborhood's eastern side — a development that has caused concerns about rising rents and property speculation in the West End.

The developer's plans for the building won’t work “unless we can keep the Section 8 contracts, unless we can keep your rents as affordable as we can possibly make them,” Shakarchi told residents at a recent tenants’ meeting. “I know the city is concerned with the new stadium coming. As an affordable developer, when the property went up for sale, we were the only ones left trying to keep it affordable, rent restricted, at the end. The other purchasers, their plans were different than ours. We want to keep you close to your church, keep you close to your doctors, keep you close to the store. I get the sense that there is a strong community here. You guys stick together. The idea is to keep you in your homes.”

Birge & Held has traditionally been a market-rate developer, but last year started an arm dedicated to affordable housing. The company is currently working on a $37 million renovation in Indianapolis using LIHTC and $19 million in city bonds. That project will rehab 304 units at Regency Park South apartments while locking them into affordable rents.

Eventually, the company would like to do the same at the Arts Apartments. That would mean more affordable housing in the neighborhood, but it would also subject residents at the apartments to maximum income requirements — meaning they would have to leave if they were not eligible for subsidized housing.

For now, however, Shakarchi says the plan is to provide small fixes should the company be able to purchase the property. If all goes according to plan, Birge & Held could take possession of the Arts Apartments in March.

It’s unclear exactly how much low-cost housing is in the West End, though a housing study commissioned by the Greater Cincinnati Redevelopment Authority should shed some light on that question next year. That study was a condition of a community benefits agreement between FC Cincinnati and the neighborhood.

A CityBeat analysis of HUD and U.S. Census data, however, found that the West End has roughly 1,000 units of rental housing at below-market-rate affordability due to ownership by Cincinnati Metropolitan Housing Authority or because they were built by private developers like The Community Builders using Low-Income Housing Tax Credits. Some of those buildings, however, will change over the next few years as CMHA eyes redevelopment through a program called Rental Assistance Demonstration that will effectively turn over the public housing to private operators, who will continue to operate it as affordable housing.

There will also be a bit more affordable housing nearby soon. Next door to the Arts Apartments, nonprofit Tender Mercies is working with Over-the-Rhine Community Housing on a $10 million, 57-unit subsidized housing development for those suffering from mental illness and addiction issues.

Citywide, there is a roughly 30,000-unit gap between available affordable housing units and needed units, according to data form the Ohio Housing Finance Agency. Census data shows that more than 3,000 of the West End's residents live below the poverty line. Another 1,300 live above poverty level but still well below the income needed to comfortably afford the city's average rent, which has hovered around $900 a month in recent months.

Residents are hopeful the coming change at the Arts Apartments will be positive and won't cut into the affordable housing in the neighborhood.

Arts Tenant Association board member Patricia Dixon, born in the West End, has lived in the building for six years.

“I’m 72 years old, thank the lord,” she says. “I don’t want to move. I don’t have time to move. Anyone who lives down here knows that downtown has long been a stomping ground for most black people. We’ve lived down here for many, many years. My neighbor lived here for 50 years. We hope that we can stay here.”