Even though some members of Mayor Mark Mallory's staff are getting double-digit raises, the mayor's budget is actually being downsized to rely on less staff members, ultimately shrinking the mayor's office budget by $33,000 between July 1 and Dec. 1.

Some of Mallory's staff obtained raises because they will be taking up the former duties of Ryan Adcock, who left earlier in the month to help lead a task force on infant mortality and will not be replaced.

The Cincinnati Enquirer reported the raises earlier today, but the story at first did not mention that the budgetary moves will ultimately save the city money. The "Enquirer exclusive" includes a "tell them what you think" section in which citizens can email the mayor's office and copy Enquirer editors. The story was later updated to include the overall savings, though The Enquirer posted a separate blog titled, "Mallory getting an earful on raises," which was a collection of angry emails to the mayor based on the original version of the story.

CityBeat acquired a memo written by Mallory that outlines the rest of the plan, which will produce savings: "I will not replace Ryan Adcock on my staff. Instead, I have divided his responsibilities among my remaining staff. In addition, I will not hire the two part-time staffers that I had considered hiring. The additional work in the office will be supplemented by unpaid interns.

Mallory spokesperson Jason Barron says the mayor will also not be replacing staff that leaves from this point forward, which could produce more savings down the line.

As of 6:30 p.m., The Enquirer's homepage still prominently displayed the story out of context, suggesting that the raises will add to the city's $35 million deficit. 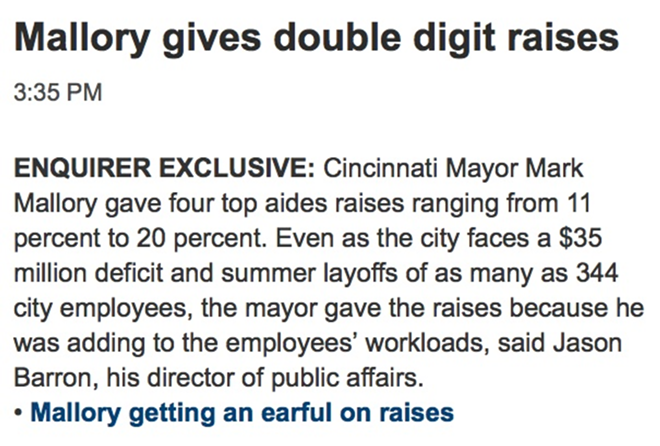 Since Mallory is term-limited, Barron says the savings will only apply to Mallory's remaining five months. The mayor who replaces Mallory in December will decide whether to keep or rework Mallory's policies.