Do news outlets have a particular lean, or do audiences? 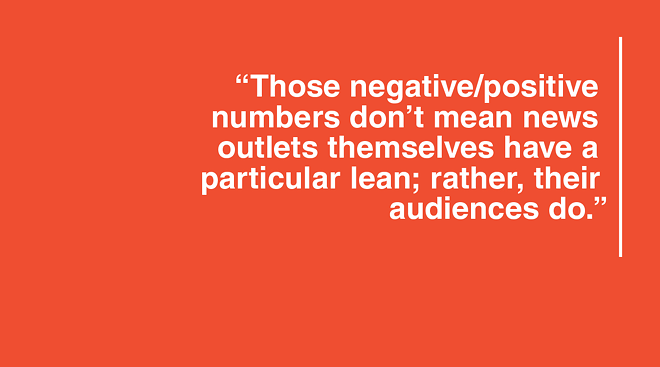 We’re in our second week at UC’s adult ed program where I lead a class on media ethics and missteps.

It’s never been more challenging or fun. My only question was where to start this annual class for the Osher Lifelong Learning Institute (OLLI).

I only teach in the fall; elections provide so much material that no one has to do homework. Our overarching narrative is at once simple and devilishly complex: What do news media do to avoid bias or the appearance of bias.

Our working definition of bias includes reporting that avoids choosing sides in any controversy; it’s not the same as giving all sides the same amount of space or time or ignoring an imbalance of failure and achievement.

Questions about fairness, news judgment and other aspects of ethics — and missteps — fill out our discussions.

Last year, our class faced the primary and presidential campaigns and finished after the election. That was a wild ride.

We could not imagine it getting crazier. It has, given the sheer volume of Donald Trump’s wild fabrications and belligerent counterpunching at anyone who displeases him.

It appears that he believes anything Fox News tells him, and nothing provokes him more than bad news about appointees that takes cable TV’s attention from him.

A recent study by the nonpartisan Pew Research Center’s Journalism Project suggests that what appears to many Americans as news media bias can be no more than reporting what is going badly for the president.

At the same time, journalists are questioning traditional news judgment; responding to Trump’s every tweet and ad hoc statement deflects attention from what his administration is doing or failing to do.

It’s all Trump, all of the time. He’s a genius at self-promotion.

This reflects Trump’s modus operandi — he likes what seems to be chaos around him — and the inability of shrunken newsroom staffs to pursue traditional watchdog journalism.

The best of surviving dailies and internet investigative journalism can’t match what we were accustomed to for decades.

Before ad income tanked and owners began to fire tens of thousands of men and women in their newsrooms, it was a rare federal department that wasn’t covered by a knowledgable reporter.

At least we had an idea what the government was doing or failing to to do. Not now. Those were older veterans whose heads were the first on the chopping blocks.

Now we have a president whose entire concept of government is about him, what he thinks and says; a modern Sun King (le Roi Soleil).

No one — irrespective of partisanship — should be surprised that fewer than one-third of stories about Trump’s early presidency were about his policy agenda.

That’s a new low, compared to news coverage of recent past presidents. Half of stories at the start of Obama’s presidency were about his policy agenda, and the total was even higher for Bush in 2001 and Clinton in 1993.

Part of the problem, of course, was the lack of specificity in Trump policy proposals; there was little to report other than department-by-department proposals to reduce federal regulations.

A related problem was whether to take Trump seriously or literally when he said he’d do something.  Even his closest advisors — beyond family — were unsure.

All of this comes through in the Pew study. NPR summarized the study this way:

“Compared to other recent presidents, news reports about President Trump have been more focused on his personality than his policy, and are more likely to carry negative assessments of his actions. … Researchers studied news stories from the early months of Trump’s presidency, determining whether each story evaluated Trump overall in a positive or negative light.

“Fully two-thirds of news stories about Trump from his first 60 days in office were negative by that definition — more than twice the negativity seen in stories from the first 60 days of Bill Clinton, George W. Bush or Barack Obama’s presidencies.”

If we go back to those chaotic early months with Trump driving the 24/7 news cycle, events rarely generated favorable coverage.  It began with false White House assertions about inauguration crowds and slide downhill in a fact-free universe promoted by the president and his aides.

A typical falsehood was the president’s recent claim that a hospitalized senator couldn’t vote and that’s why efforts to kill Obamacare failed. Nope. The senator said he wasn’t in hospital. He didn’t call the leader of his party a liar, but he could have.

Early news stories reflected how White House staff and appointees engaged in knives-drawn leaks at some rival’s expense. These often were men and women who had the president’s ear; what they said was newsworthy.

It was hard, then, to generate positive stories about Trump or what his fragmented administration — with its confused foreign policy and often leaderless departments — was doing.

Put another way, keeping journalists’ attention almost solely on him was a brilliant way to deflect any remaining energy from wondering what else was happening.

As Amy Mitchell, director of journalism research at Pew and study leader put it, news media bias isn’t a conclusion from the study.

“Our data show that outlets with left and more mixed audiences did cover more negatively assessed elements of Trump’s early presidency, while media with right-leaning audiences covered more positively assessed,” she said. “Whether one or all of these are in-line or out-of-line with reality is beyond the capacity of this research.”

Rather, she said, the study is trying to measure what kinds of messages people are consuming when they get their daily news and whether Americans’ polarization would be reflected in the news they choose to consume.

The number of sources cited seemed to be related to a story’s overall positive or negativity: “Stories with a greater mix of voices were more likely to have an overall negative sense of the president’s actions or statements.”

Or as Pew put it, those negative/positive numbers don’t mean news outlets themselves have a particular lean; rather, their audiences do.