No one this side of Disney or Pixar has skin like that, so plastic it could be the Pillsbury Doughboy. 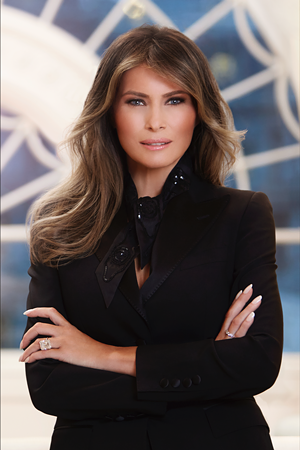 Photo: Regine Mahaux
If you cruise internet news sites — especially nipple-obsessed dailymail.com — you can’t avoid images of young women who dedicate their wealth and bodies to looking like a Barbie doll or some cartoon character.

When I saw the White House’s first formal portrait of Melania Trump, I thought it was a prank: Her face was so smooth, so devoid of human signs other than bright eyes — so, well, cartoonish.

That’s too bad. She is an attractive woman who’ll be 47 on April 26. Lines enhance her beauty as she ages.

But not in the official portrait. Botox? Makeup? Photoshop? I’d bet on Photoshop, probably ordered or approved by the president, a philanderer who discards the mothers of his children as they age.

Or by Melania, lest Trump inescapably face pictures of a third aging, yet still attractive, wife.

If Melania’s image were a painting, the absence of lines in her face wouldn’t be an issue. Painted portraits are, after all, exercises in how the artist sees.

This purports to be a photograph, and it lies. No one this side of Disney or Pixar has skin like that, so plastic it could be the Pillsbury Doughboy.

American news media accepted the image uncritically, cooing over first formal portrait of FLOTUS (First Lady of the United States). They lapped it up with the kind of enthusiasm that London dailies show for anything royal.

The image is fake and its release as a formal White House portrait is disinformation.

Editors who went along with this Oval Office scam were enablers, news media complicit in misleading the public.

Melania’s airbrushed, Photoshopped portrait is a fraud, a fake, an alternative image, created and distributed by the Ministry of Truth where employees paid by taxpayers create facts opposite of anything verifiable.

Not everyone bought it. Pulitzer-winning Washington Post critic Robin Givhan said the photo “is jarring because her face appears to be heavily retouched, or perhaps just photographed through a lens smeared with Vaseline. It is devoid of fine lines and pores. It is not just the near-perfect face of a former model; it is a face that does not look real.

“The artificiality of her visage is even more acute when compared to the long, chestnut locks that frame it. You don’t have to squint to make out individual strands of hair. The hair is in sharp focus. Her face is not.”

I call it fake.

But not her body language, arms folded across her torso, huge engagement ring confirming her husband’s wealth and power. That was genuine.

Givhan adds, “There’s plenty that one can infer from Trump’s official photograph. The body language is reminiscent of boardroom posture. It’s powerful and confident. But it’s also closed off.  The framing is a close-up with little context. Yes, it was taken in the White House, but the window in the background could almost be anywhere. The photo emphasizes her, not the setting, which one could argue reflects the subject’s desire not to be defined or confined by the White House. Indeed, she is not living there. ”

Which brings up another issue. The Washington Post — a leader among news media punching back at Trump attempts to delegitimize facts — appears troubled by the lack of time Melania spends in the White House.

I caught that in the Weekly Standard — no friend of POTUS — which said, “There once was an informal editorial motto that guided the selection of topics in Style, the Washington Post lifestyle section: ‘If a story is worth doing, it’s worth doing every year.’

“But in the age of Trump, that schedule has become rather compressed: The Post is now doing the same article about Melania every couple of months.

“It was at the end of January the Style section let loose with ‘The AWOL first lady,’ decrying Melania’s demure, if not diffident, approach to being the president’s spouse. ‘Melania Trump appears to be in no hurry to heed the call of duty,’ was how reporter Krissah Thompson denounced the Donald’s bride.

“And now, come March 28, the creative team at the Post is back, this time with a big Style section cover story, ‘Melania Trump’s vanishing act.’ Which raises a philosophical question: If Mrs. Trump was absent two months ago, how can it be that she is now ‘vanishing?’ ”

The irony, of course, is that the Darwinian free market that Trump worships could bring down money-spinner O’Reilly.

Already skittish about any suggestion they are sexist, racist, homophobic, xenophobic and insufficiently green, advertisers are pulling out of O’Reilly’s evening program.

So far, according to NPR media critic David Folkenflik, GlaxoSmithKline, Allstate, Hyundai and Mercedes-Benz are among firms that cancelled plans to advertise on The O’Reilly Factor.

There are lots of plots playing here, in addition to accusations against O’Reilly and Trump’s assurance that O’Reilly is a good man.

Fox News is owned by Rupert Murdoch. So is the Wall Street Journal, a home-town and national competitor to the New York Times. The Times broke the story on $13 million payments to settle claims of sexual harassment and inappropriate behavior by O’Reilly.

The best part, if we credit his accusers, was O’Reilly’s  access to attractive women at Fox News. He’s not alone in being accused of operating a casting couch at American conservatives’ favorite cable channel.

O’Reilly is one of the aging powers at Fox News to get into trouble over accusations of sexual harassment, including demands that younger female colleagues or aspirants provide sexual services in hopes of getting or keeping jobs or winning promotions. He denies any wrongdoing over more than a decade of similar accusations.

Those accusations cost Roger Ailes, the chairman who created Fox News with Murdoch, his job. Like O’Reilly, Ailes denied any wrongdoing.