The city’s Metro bus system faces a $188 million shortfall over the next decade under current funding conditions, and that’s just to keep the status quo at a time when many say improvements are vital 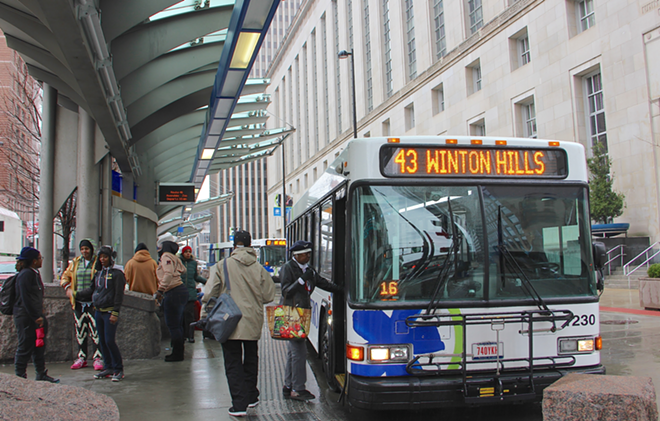 Cincinnati’s bus system continues to face big financial challenges. The Southwest Ohio Regional Transit Authority’s board yesterday released its $98.1 million 2018 budget. That spending plan narrowly avoids deficits in the coming year, the board says, but big changes — including route cuts and fare increases — will be necessary without more funding.

The city’s Metro bus system faces a $188 million shortfall over the next decade under current funding conditions. And that’s just to keep the status quo. An independent report released by consultants AECOM in January found Metro would need at least $1 billion in upgrades over the next 10 years to make it more functional and get more county residents to the region’s jobs.

A 2015 study of Metro’s reach commissioned by the Cincinnati USA Regional Chamber, the Urban Land Institute and other organizations found that only 23 percent of jobs in the city are easily reachable by public transit. Many others take more than 90 minutes to reach by bus. And about 40 percent of jobs in the city — some 75,000 — aren’t reachable by transit at all. All told, the city ranks lower than 11 other peer cities when it comes to job accessibility via public transit, including regional neighbors Louisville, Indianapolis, Cleveland, Columbus and Pittsburgh, as well as cities like Denver and Austin, Texas.

The bus system's budget this year relies on some $56 million from the city's transit fund, which is paid for with a .3 percent city earnings tax. The rest of the money will come from bus fares and state and federal sources, though those are slim. Ohio ranks among the lowest spenders of public dollars per capita on transit. In 2015, Ohio, the nation’s seventh-most populous state, spent just 63 cents per person on public transit, making it one of the most tightfisted in the country. In contrast, every other one of the nation’s 10 most-populous states spent much more.

Making the situation more difficult, Hamilton County hasn't paid for transit since the city's earnings tax was tapped to fund buses in 1973, though Cuyahoga, Franklin and six other Ohio counties pitch in for their transit authorities.

SORTA’s board has voted to put a sales tax levy on next year’s Hamilton County ballot to improve Metro’s funding. The amount of that levy has yet to be decided but could range between .5 and 1 percent — the most it can ask voters for without approval from Hamilton County Commissioners. But not everyone agrees that is the right move. Hamilton County Commission President Todd Portune has asked SORTA to reconsider its ask as he works on a plan to establish a larger regional transit system encompassing eight counties and 200 municipalities in Ohio, Kentucky and Indiana. Last year, Portune discouraged SORTA from making a similar ballot ask in 2017.

Before that ballot initiative, SORTA's board is also mulling raising fares by 15 cents to $1.90 per ride. That fare increase would take place in June next year. It would be the first such increase since 2009. SORTA says it will hold public forums about the potential increase before making its decision. The money would go to buying new buses, according to the transit authority. By next year, SORTA says it will have 101 buses that are more than a dozen years old and past their normal functioning lifespan.

Metro has already planned on reductions and restructuring of several routes to save money — those changes will go into effect next month and are expected to save about $500,000 a year.

“Unless we find additional funding, we’re facing significant deficits that could require major service reductions beginning in 2019,” Metro CEO Dwight A. Ferrell said in a news release yesterday. “At the same time that we’re working aggressively on the Reinventing Metro plan to improve service and get people to jobs, funding for our current system is not keeping pace with costs. The old model is broken, both in terms of service delivery and funding.”

Local transit activists agree that Metro's situation is dire. A group calling itself the Better Bus Coalition has been advocating for SORTA's transit levy, but has also released its own plan for ways to shore up Metro service, including envisioning new rapid-transit bus routes with fewer stops to serve riders more quickly.

"Our plan is a conversation starter," Coalition President Cam Hardy said earlier this month during the plan's unveiling. "We understand that there are going to be a lot of moving parts and input to this. We're just trying to start the conversation because, quite frankly, the conversation has never been had. We've never seen significant investment in our public transportation system... we as bus riders said, 'enough is enough.' "