More Bus-Only Lanes Could Be Coming to Cincinnati

Cincinnati City Council wants city administration to explore the feasibility of more bus-only lanes along busy corridors, including a portion of Reading Road. 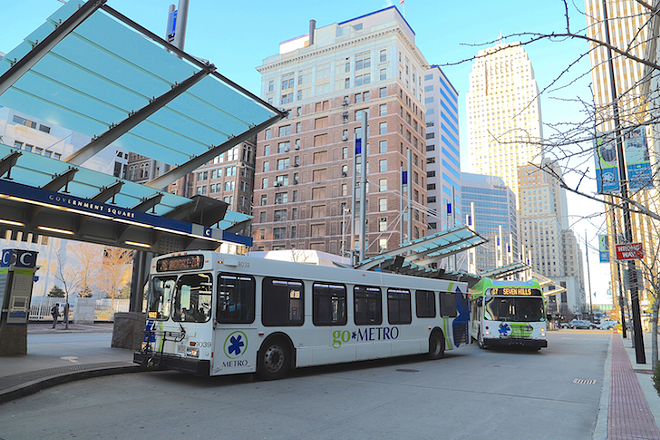 Last year, Cincinnati took a step that supporters said would boost the region's Metro bus service by making the curb lane along a stretch of Main Street downtown between Government Square and Central Parkway a bus-only lane during morning and afternoon rush hours.

Now, the city may expand the program.

Cincinnati City Council today passed a motion asking city administration to study the feasibility of putting more bus-only lanes in along busy corridors in Cincinnati. The motion also names Reading Road between Paddock Road in North Avondale and William Howard Taft Road in Corryville as a corridor the city should look at specifically.

The point of the lanes is to make it easier for buses to navigate busy city streets, leading to quicker routes, better on-time performance and, eventually, more riders.

Councilmember P.G. Sittenfeld, who submitted today's motion, says that the Reading Road and other potential bus-only lane locations will be decided by an analysis the Southwest Ohio Regional Transit Authority has developed that compares areas where a bus-only lane could make a big difference with the difficulty associated with establishing a bus-only lane there for at least a few hours during the day.

"We looked at a matrix they have that looks at impact and feasibility," he said. "If the impact isn't that great, and it's hard to do, it's not going to be high on the list. So that kind of guided us."

Sittenfeld cited the success of the Main Street lane as a reason he wants to see the city look into establishing more bus-only lanes in the future. CityBeat has reached out to Metro for data about the lane's performance.

That bus-only lane launched Nov. 5 as a pilot program to test out the concept advocated by transit activist group the Better Bus Coalition and passed by Cincinnati City Council earlier that year.

Stretching from Fifth Street to Central Parkway and active between 7-9 a.m. and 4-6 p.m. Monday through Friday, the goal of the lane has been to speed up bus service in one of the city's busiest corridors, hopefully improving service system-wide. Fifth Street's Government Square is the city's central bus hub, and more than 600 buses travel the stretch every weekday, according to Metro. Only about 90 of those use the right lane on Main Street to pick passengers up at bus stops, however.

"We basically started with the most ambitious part of the city we could have, Main Street coming out of downtown, obviously very busy — so I feel like the fact that that has been both accepted and well-received opens the pathway to at least study and find out where we can do this again," Sittenfeld said.