More Than $40k Raised for Family of Covington Woman Killed in Aug. 20 Hit-and-Run

The investigation into Gloria San Miguel's death is ongoing. 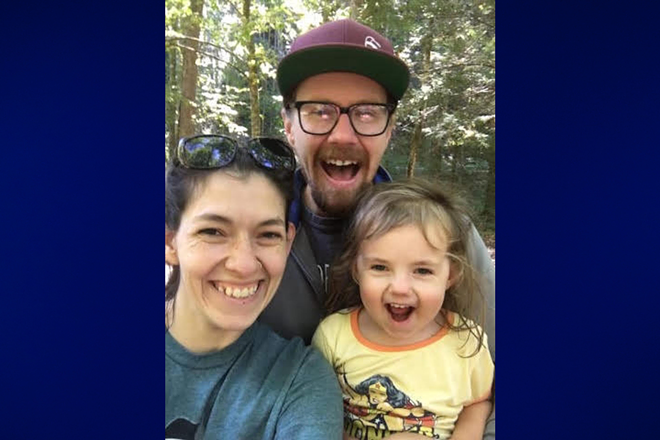 Photo: Provided by Jake Lee
Gloria San Miguel (left, with partner Zack Vickers and daughter Luna) died Aug. 20 while riding her bike on the Girl Scout Bridge between Covington and Newport. Family friend Jake Lee has raised more than $40,000 for the family.

Officials from the Newport Police Department say they are searching for the driver responsible for hitting and killing a Covington woman who was riding her bike on the Girl Scout Bridge between Newport and Covington on Aug. 20.

Officials say the crash happened around 12:30 a.m. that day. Emergency crews arrived to find the driver had fled the scene. The investigation is ongoing.

While police have not confirmed the identity of the cyclist, a GoFundMe page and an Instagram post from Roebling Point Books and Coffee identify her as Gloria San Miguel, an employee of the book store.

“We all have a Gloria-size hole in our hearts,” the post reads. “We will miss her profoundly, far beyond what words can describe. She was our bright star. We loved her and she loved everyone.”

Jake Lee organized the GoFundMe for San Miguel’s family. He says Zack Vickers, San Miguel’s spouse, is like his brother and that he has always considered San Miguel, Vickers and their 3-year-old daughter, Luna, to be his family.

“He has all of us at any given moment. We’re all going to look after Luna,” Lee says.

Lee says that as "family," he wanted to make sure Vickers had the financial means to transition into being a single parent without having to return to work before he was ready.

“Zach wasn’t technically a stay-at-home dad because he worked on the side too, but Gloria was the breadwinner,” Lee says. “There’s also an immeasurable cost of grief that most people don’t understand. Some people have to go right back to work after something like this happens. What we want for Zach is a cushion so he can take time to grieve and mourn.”

Messages from donors paint a picture of the kind of impact San Miguel had on loved ones. “I met Gloria through the Orchard Park Farm Project. She was so passionate about the garden. What a sweet and caring young woman,” reads a comment from a donor.

Emily Webster worked with San Miguel at Roebling Point Books and Coffee. She says San Miguel worked for about eight years between their Newport and Covington locations, doing everything from pouring coffee to managing. San Miguel was known for crafting inspiring messages and art on chalkboards outside the Covington location.  In April, she started an open mic poetry night that has continued every month at Roebling Point .

“You can’t realize how much someone is doing for you until they’re not doing it anymore,” Webster says.

Webster says that before the open mic nights continue, the business will host a writing circle in which participants can process their grief through poetry.

“We knew we would need some time to step back and then move forward with the open mic poetry,” Webster says. “A very good friend of the store who is used to coaching others on writing and conducting workshops said, ‘I’d really like to do something. Here’s my skill. How can I help?’ So, I decided that would be a good opportunity.”

Webster says San Miguel’s connection to the small community extended far beyond the poetry crowd at Roebling Point. She also was heavily involved in the community garden, where she would weed and grow vegetables with Vickers and Luna. She was known for being an avid supporter of the Covington Farmers Market. It was common to see San Miguel take the stage at karaoke, or even at a venue where she wasn’t on the bill.

“She was so special,” Webster says “Just a week and a half ago, we were towards the end of the day and she said, ‘Well, I have my guitar with me, so I’m going to go over to Molly Malone’s. They have bluegrass. The people there are just so nice, I know they’ll let me squeeze into the circle and I’ll just try and keep up.’”

There are ongoing talks between the Devou Good Foundation – a local non-profit that focuses on active transportation solutions – and the Kentucky Transportation Cabinet to implement protective measures for cyclists on the Girl Scout Bridge where San Miguel was killed, according to email correspondences obtained by CityBeat.

A petition in support of added safety measures in Covington has also amassed more than 2,300 signatures as of Aug. 24.