U.S. Sens. Sherrod Brown and Rob Portman don't agree on much, but both say the DOJ's move naming Robert Mueller as special counsel leading the inquiry into ties between the Trump campaign and Russia is a good choice. 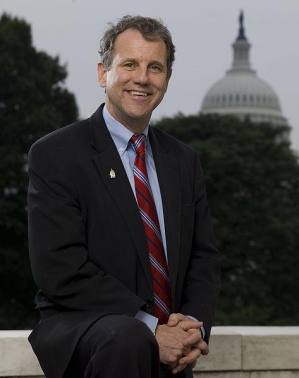 Happy Friday Cincy. There’s plenty of news happening to last you through the weekend, so let’s get right to it.

Hamilton County Common Pleas Court Judge Leslie Ghiz has set tight protocols ahead of the retrial of former University of Cincinnati Police officer Ray Tensing. Only three reporters, chosen by lottery, will be allowed in Ghiz’s courtroom during jury selection, which begins May 25 with juror questionnaires. No cameras or recording devices will be allowed in the courtroom, and Ghiz has issued gag orders on lawyers working both sides of the case. Those moves, which Ghiz says she is making “out of an abundance of caution,” come after Tensing’s last trial in November ended with a hung jury. The case could be different this time around — Tensing’s attorneys have filed to have one of the prosecution’s expert witnesses blocked and a T-shirt depicting the confederate flag Tensing wore when he shot unarmed black motorist Sam DuBose barred from evidence. Ghiz will hear arguments about those requests May 25. Tensing faces murder and manslaughter charges for that July 19, 2015 shooting, which happened after a routine traffic stop in Mount Auburn.

• Mayor John Cranley gave a tearful apology last night after his office accidentally put forward a proclamation declaring June 1 “Tre Day,” honoring the person who shot and killed Cincinnati Police officer Sonny Kim in 2015. Trepierre Hummons, who was reportedly suffering from mental illness, shot and killed Kim in Madisonville after indicating on social media he wanted to die at the hands of police.

“I am really sorry that my office mistakenly issued a proclamation on behalf of the man who murdered Sonny Kim,” Cranley said last night at a news conference at the Cincinnati Fraternal Order of Police headquarters. Hummons’ father, Ron Hummons, sent a request to memorialize his son to raise awareness about mental illness and childhood trauma. After a couple tries, Hummons’ request got through, Cranley Communication Director Holly Stutz Smith approved it, and Cranley’s signature was stamped on it, according to Cranley’s office.

“The proclamation was raising awareness around mental illness and child abuse,” Stutz Smith said. “It wasn’t anything specific about this person’s background. I was unaware, and I’m sorry.”

The gaffe has angered many officers, according to FOP President Dan Hils. Citizens have also taken to social media to slam the mistake. Some were more measured, however, saying they understand it was a mix-up. Cranley has since rescinded the proclamation and called Kim’s widow to apologize. The timing of the proclamation is especially unfortunate — today is the city’s annual memorial for fallen officers.

• Should a long-running effort to build a bike trail through east side Cincinnati neighborhoods get more money? Boosters of the project are seeking more funding from the city, but after a round of emails to Council from some supporters, Councilman Kevin Flynn fired back with an unusually blunt response: basically, “no.”

“When is enough enough? The city has spent millions and millions on a 4.1 mile section of Wasson Way bike trail already,” Flynn, who isn’t seeking re-election this year, wrote in responses to those emails. “The Wasson way group has spent more money on signs and buttons then it has on procurement or construction of the trail. You can count me out for any further contribution, even if it is only ‘$1 million.’ ”

City Manager Harry Black has set aside $300,000 next year in his city budget proposal for the 4.1-mile-long bike trail project that stretches from Evanston through Hyde Park, Oakley and other neighborhoods to Columbia Township. But supporters would like to see $500,000 next year and the same amount the year after. The project has been in the works since 2009 and was initially planned to stretch 7.6 miles into Avondale. The city spent about $12 million buying right-of-way on old railroad tracks from Norfolk-Southern last year. Design and construction of the entire 4.1 mile stretch is expected to take another $14 million.

• City oversight of invoices submitted by nonprofit The Center for Closing the Health Gap has been too lax, a recently-completed audit found. The Health Gap, run by former Cincinnati Mayor Dwight Tillery, invoiced the city for $3,600 of work done by a political group called the Black Agenda Cincinnati. Those invoices — which the Health Gap later repaid to the city — were improper, the audit says. The audit also found the Health Gap continued to pay some contractors after their contracts had expired. The audit laid some of the blame on the fact that some city employees tasked with keeping an eye on the group’s spending didn’t have the training to do so. The audit also found wider inconsistencies when it came to oversight for spending by outside groups receiving city money. Now, the Health Gap’s contract with the city will be more detailed, and its use of taxpayer dollars will be more closely overseen by the City Manager’s office and must relate to city work. City Manager Harry Black has set aside $750,000 next year for the Health Gap in his budget proposal — much less than the $5 million the Health Gap asked for initially this year, but not a huge step down from the $1 million it received in the current budget.

• A Northern Kentucky brewery is set to open its second location next week — and it’ll be more than just your standard taproom. Braxton Brewery has been setting up shop in the Bellevue space once occupied by Ei8ht Ball Brewing, which was run by Party Source. Braxton is turning the location, which opens to the public May 26, into what it calls an “innovation facility” where it will experiment with new beers and brewing techniques.

• Ohio’s two senators inhabit opposite ends of the ideological spectrum, but they do agree on something: The U.S. Justice Department’s move naming former FBI director Robert Mueller as special counsel to head the inquiry into ties between President Donald Trump’s campaign and Russia is a good choice. The DOJ’s decision comes after Trump fired FBI director James Comey and subsequent revelations that Trump had leaned on Comey to end an investigation into Trump’s national security advisor Michael Flynn, who lied about meeting with Russian diplomats during Trump’s campaign. Phew. Anyway, both Republican U.S. Sen. Rob Portman, a staunch conservative who has supported the Trump administration, and Democrat Sen. Sherrod Brown, a vocal Trump critic, applauded Mueller taking the helm of the independent investigation into Trump’s Russian ties.