Notorious white supremacist Richard Spencer wants to speak at the University of Cincinnati — but the school’s not sure they can accommodate his request safely. 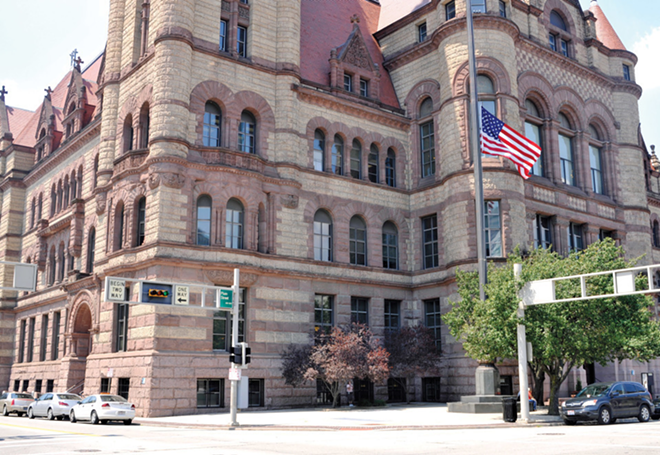 Good morning, Cincy. Let’s get through all this news so we can get to the weekend.

First, a little bit of catch-up since I was out yesterday and didn’t get a chance to write the normal news roundup. Cincinnati City Council Wednesday voted to move forward with a plan by Mayor John Cranley, Council members Kevin Flynn and P.G. Sittenfeld and Vice Mayor David Mann that would expand VTICA, or the voluntary tax incentive contribution agreement program, to help fund affordable housing and development in neighborhoods outside downtown and Over-the-Rhine. VTICA deals currently allow developers in OTR and downtown to get 100 percent tax abatements on the increase in the value of property due to major projects if they agree to give 15 percent of the savings they get from those abatements to help fund the streetcar. That’s on top of another 25 percent of the abatement savings that go to Cincinnati Public Schools.

The initiative Council voted for Wednesday will create a similar program for developers working in the rest of Cincinnati’s neighborhoods, but would shovel the money from developers into an affordable housing fund and toward neighborhood development efforts. Included in the plan is a detailed process for how decisions would be made for spending that money. The change-up comes as the city is set to review and renew its development tax abatement policies. The move won’t necessarily net big money at first — perhaps just a few hundred thousand dollars in its first years — but could eventually bring in millions a year for affordable housing and neighborhood projects.

• The contentious debate about freedom of speech on college campuses — even when that speech is hateful — could be coming to Cincinnati. Notorious white supremacist Richard Spencer wants to speak at the University of Cincinnati, but the school’s not sure they can accommodate his request safely. Spencer originally wanted to speak at Ohio State University, but OSU, the University of Florida and Texas A&M have all declined to host him, citing safety concerns for their students. Spencer advocates for a separate white nationalist state, is credited with creating the term “alt-right” and was a co-organizer and headline speaker at the “Unite the Right” event in Charlottesville, Va. Anti-racist demonstrator Heather Heyer died at that event after an Ohio white supremacist drove his car into a crowd of protesters.

• City Manager Harry Black and Cincinnati Police Chief Eliot Isaac say they’ll move 35 CPD employees out of the department’s District 5 headquarters after a number of workers there have been diagnosed with cancer in the past few years. About 130 police personnel work out of the 60-year-old building, but most come and go throughout the day and stop there only briefly. Those working on a more continued basis will be relocated to a former bank building on Colerain Avenue in Camp Washington. Fraternal Order of Police President Dan Hils says the building is making workers sick, and that the city should consider decommissioning it and building a new facility.

• Will Cincinnati shift further toward solar energy? Mayor John Cranley says he wants the city to make the state's largest municipally-run solar array over the next two years at sites like Lunken Airport. Cranley says his vision could provide 20 percent of the power needs for municipal functions. That's part of a larger effort to revamp the city's 2008 Green Cincinnati plan. That plan wants city functions to be powered by 100 percent renewable energy by 2035. Cranley's push would cost $40 to $45 million.

• Inmates at the Hamilton County Justice Center yesterday filed a class-action lawsuit in U.S. District Court over the cramped conditions and treatment at the jail. One plaintiff in that suit, Samuel Robinson, says he has a painful bone disease that kept him from sleeping in a “boat,” or a plastic shell inmates are required to sleep in when the justice center runs out of jail cells. Robinson, who was serving six months in the center for crack cocaine possession, says he was punished when he protested the jail’s overcrowded conditions. The lawsuit says that the overcrowding causes violent confrontations between inmates and creates unsafe conditions. The justice center has as many as 1,600 inmates at a time, well more than the maximum capacity of 1,200 it was designed for.

• Franklin Township officials say a controversial monument to Confederate general Robert E. Lee will soon be in a public place again. The monument was removed by the city of Franklin earlier this summer following nationwide protests around Confederate monuments and the horrific violence at the “Unite the Right” white supremacist rally to defend a Confederate statue in Charlottesville, Va. Officially, the plaque mounted on a rock in Franklin belongs to the township, but it was on city right-of-way near an intersection. City officials, who say they removed it because it was too close to Dixie Highway, turned it over to the township. Township officials say they haven’t locked down an exact location for the monument, but that there will be a rededication ceremony.

• The Ohio GOP gubernatorial primary is still more than a year away, but things are getting straight-up nasty. How nasty? Josette Burns, a former staffer for Ohio Secretary of State Jon Husted, made a personal Facebook post Aug. 30 after her grandmother passed away. Nearly a month later, Delhi Township's Linda Caudill, a campaign volunteer for gubernatorial candidate Jim Renacci and former campaign staffer for President Donald Trump, made scathing attacks against Husted and Burns in the comments of that post. You can read those comments, which get pretty intense, here. Renacci apologized for the posts and said Caudill is a volunteer for his campaign, not paid staff.

• Quick, but sad: Yesterday was the last day beloved college radio station WNKU was on the air anywhere. The station’s last frequency, 105.9 in Middletown, signed off yesterday afternoon with a classic Talking Heads jam. Northern Kentucky University sold the station to various buyers after state budget cuts to higher education made by Gov. Matt Bevin. Earlier this year Bible Broadcasting Corp. bought 89.7, the flagship frequency broadcasting from the school.

• Finally, University of Louisville basketball coach Rick Pitino is one target of an FBI bribery investigation, according to ESPN. The outlet says law enforcement sources have identified Pitino as “Coach 2” named in federal complaints around a bribery sting operation that allegedly caught university athletic officials and representatives from Adidas offering $100,000 cash to an athlete who later committed to U of L. School officials aren’t commenting on the matter, but have suspended Pitino. The Hall of Fame coach’s attorney says the charges are false. Pitino’s name isn’t listed in the federal documents, leading to speculation that federal officials don’t have an airtight case against the coach yet.