President Donald Trump's former national security advisor Michael Flynn has asked for immunity in exchange for his testimony about Trump campaign ties with Russia and possible Kremlin interference in the November election. 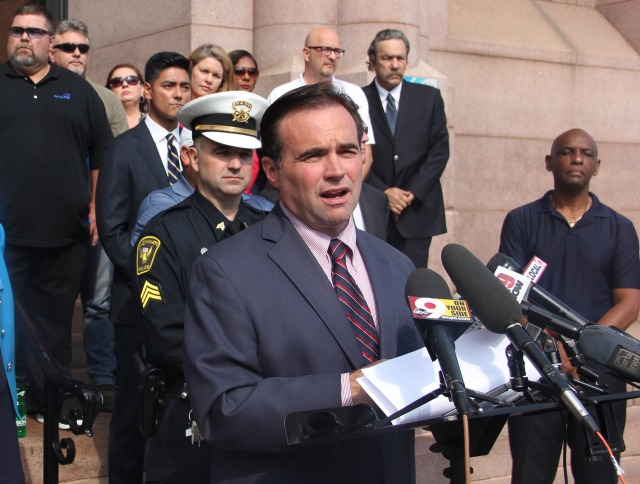 Good morning all. Here’s a little news for you before you head off to finish out the week.

City officials yesterday evening announced they’ve arrested two suspects they believe were involved in Sunday’s Cameo Nightclub shooting. The Cincinnati Police Department says it has arrested Cornell Beckley and Deondre Davis in connection with the mass shooting, which killed one person and injured 16 others at the East End club. Both are being held on murder charges with a $1.7 million bond. CPD also announced yesterday that they recovered three guns and 16 shell casings at the establishment. They’re still trying to work out if there were more shooters and are uncertain if more weapons were involved. Davis is still at the University of Cincinnati Medical Center, where he is in critical condition due to wounds he sustained during the gun battle sparked by an argument in the club. There’s no evidence that the sole fatality, O’Bryan Spikes, was targeted by the gunmen.

• In the aftermath of the shooting, Cincinnati’s mayoral candidates wrangled over public safety. As we mentioned in yesterday’s morning news, Councilwoman Yvette Simpson called a news conference in Mount Auburn to detail her proposals for addressing the city’s gun violence problem. With Simpson were representatives from Santa Maria Community Services, a social service nonprofit; Iris Roley, a longtime Cincinnati activist instrumental in bringing about the city’s heralded Collaborative Agreement between the police and city residents; and University of Cincinnati researcher Victoria Straughn, who specializes in research on violence and trauma.

Simpson said her plan involves a three-pronged approach that would treat violence as a public health issue, engage youth most likely to be future victims or perpetrators of violence and more actively engage the community in violence response measures. She also expressed support for maintaining or strengthening current programs and practices, including “a well-staffed police force.”

That last bit was probably in response to barbs from Mayor John Cranley, who has questioned Simpson’s commitment to the city’s police force.

Later in the day downtown, Cranley had his own news conference, where he appeared with Cincinnati Fraternal Order of Police President Dan Hils, touting his support for the city’s police force and blasting Simpson for her “soft approach” to crime.

“She is not credible or believable in prioritizing public safety," Cranley said at the event. Cranley went on to tout his record shoring up the city’s police force, including his push through the city’s budget process to add 100 more police officers to CPD. He also hit Simpson over statements she made during Tuesday’s mayoral forum. When asked what three departments candidates would shield from cuts looming under a current $25 million budget deficit, Simpson indicated she would protect parks, pools and recreation centers but didn’t mention police or other first responders. Both Cranley and former University of Cincinnati Board Chair Rob Richardson listed safety as a top priority.

“When asked what your priorities are, one should be safety," Cranley said at his news conference.

Simpson clarified her remarks later in the forum, saying she thought the question was only about departments currently on the chopping block in budget discussions. City Manager Harry Black earlier this month asked all departments except for police and fire to propose 10 percent cuts to their budgets. Those departments were asked to make more minor three percent cuts. Simpson has said she supports keeping police funded.

• A working group of community leaders with various stakes in the Cincinnati streetcar came together at City Hall yesterday to push for improvements to the transit service. Cincinnati Bell CEO and working group co-chair Ted Torbeck cut right to the point, asking about ways to mitigate the streetcar’s continually delayed trips. A car is supposed to come to stops every 12-15 minutes, a mark the transit service has struggled to hit.

“Is this thing getting better or is it getting worse?" he asked. "What are the top 3 things that are driving late trips, and what are we doing about it? Who's responsible to get it fixed and when's it going to be done?”

• A jail overseen by the Butler County Sheriff’s office and partnered with the Immigration and Customs Enforcement agency has been holding a Chinese woman without charges for two years, even though she’s charged with no crime other than her undocumented status. Li Li Chen, who came to the U.S. with a fake passport in 2004, has been fighting deportation in courts. She’s been in the Butler County Justice Center, separated from her husband and two children, since 2015.

• How can you not click on this link? An Ohio man is suing the Insane Clown Posse over a stolen poem. Stanley Gebhardt claims he wrote the poem “But You Didn’t” for his son and later published it in a volume of the feel-good book Chicken Soup for the Soul. But ICP’s Violent J posted himself reading the poem on YouTube, claiming he wrote it. Gebhardt is suing for copyright infringement. No word yet on whether Gebhardt also wrote the ICP classic “What is a Juggalo?” Pro tip: don’t Google that song if you haven’t heard it already.

• Ohio will put new restrictions on pain medication prescriptions to try and stem the tide of the state’s opiate addiction crisis. Among the new regulations: Doctors will be barred from prescribing more than seven days' worth of an opiate painkiller for adults or five days’ worth for children. Ohio Gov. John Kasich and state officials announced the new restrictions yesterday, as Ohio lawmakers work on more.

• The Ohio GOP is telling President Donald Trump to back off tea party groups. Trump hasn’t been too happy with far-right, small government groups like the Freedom Caucus, made up of a few dozen House Republicans like U.S. Rep. Jim Jordan of Ohio who opposed the GOP’s American Health Care Act. Jordan and company gathered enough potential “no” votes to sink the bill because it didn’t repeal President Barack Obama’s Affordable Care Act fast enough. Afterward, Trump tweeted that his supporters should oppose Freedom Caucus members in 2018. Now, the Ohio GOP has fired back, with 20 lawmakers and party officials from across the state signing a letter to Trump asking him to support, not fight, Freedom Caucus congressmen. The letter is mostly polite and positive, but it’s another sign that the honeymoon may be over between Trump and hard-right Republicans.

• Finally, Trump's former national security advisor Michael Flynn has asked for immunity in exchange for his testimony about White House and Trump campaign ties with Russia and possible Kremlin interference in the November election. That's big news. Flynn himself commented last year on MSNBC that "when you're given immunity, that means you've probably committed a crime." Yowza. The president says Flynn should seek immunity because the former advisor is the victim of "a witch hunt."