Hamilton County Coroner Lakshmi Sammarco says her crime lab does not have the necessary resources to test all of the county’s rape kits and must return them to the Cincinnati Police Department, which will send them to the state crime lab in London, Ohio. 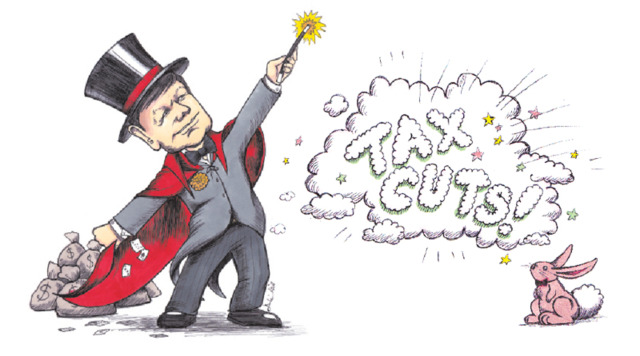 Tax cuts are magic. How do you even measure magic?

Hello all. I hope you’re having a grand morning and that you’ve been celebrating Burger Week. Where’s your favorite burger place? Mine is Quatman’s — the no-frills family cookout-style burger and fries place in Norwood — though Brew House is right around the corner from where I live and their veggie and salmon burgers are incredible (sorry vegans, I'm not sure if their veggie burger is animal-free). Of course, there’s another low-key mystery place I like to frequent within about a mile of CityBeat HQ, but I’m keeping it to myself so I don’t end up waiting an hour for their burgers. I only get so long to eat lunch. Anyway, enough about burgers for now. Let’s get to the news.

Hamilton County Coroner Lakshmi Sammarco says her crime lab does not have the necessary resources to test all of the county’s rape kits and must return them to the Cincinnati Police Department, which will send them to the state crime lab in London, Ohio. That’s because the crime lab’s DNA testing division has a backlog of 556 cases, including 74 untested rape kits from the past four months. There are four technicians to handle all that work, and the coroner’s outdated crime lab facility can’t fit any more than five technicians. The county approved hiring the fifth after a nearly two-year delay, Sammarco says, but another technician left this spring.

City Manager Harry Black said in a memo to Cincinnati City Council that shipping the kits to the state lab would take longer than if they’d been done in-house, but Sammarco says the measure will speed things up so the evidence doesn’t linger in the beleaguered crime lab. Cincinnati Police Chief Eliot Isaac says the state lab told him turnaround on most of the kits should be about two weeks. Plans for a new $60 million lab in Blue Ash are in the works — the county has already set a budget for that facility and purchased land for it. In the meantime, County Commissioner Chris Monzel said that Sammarco should consider running shifts in the DNA lab if space is an issue and should tell the commission if it needs to hire more technicians. Monzel added that funds for those technicians would need to be found by making cuts elsewhere, however. Sammarco says the situation is temporary and the lab simply needs to catch up to demand as it waits for a larger facility.

• Hamilton County officials have been very skeptical of any taxpayer buy-in for a potential FC Cincinnati soccer stadium. But will the Port of Greater Cincinnati Development Authority be more game when it comes to public money for the sports complex? FC, which is seeking a Major League Soccer franchise and says it needs its own stadium to get it, recently approached the Port Authority with the preliminary idea that it could own a $200 million proposed stadium for the team. That could lower the costs of building the stadium, team officials say, as the Port could borrow money and purchase materials without taxes. Port officials say the discussions are preliminary, and they haven’t tipped their hand about whether they’re looking to get involved. The Port has helped with other big building projects, including Great American Tower.

• In the wake of two hung juries in the case of former University of Cincinnati Police office Ray Tensing, should Ohio change the way it selects juries? Some activists think so. Right now, the state only selects jury members via voter registration — missing a huge swath of people who aren’t registered to vote. Potential jurors could also be recruited from lists of people applying for driver’s licenses and state IDs as well as those filing taxes with the state. A number of other states pull from those lists, a move that could make juror pools more racially and economically representative. But some people, including retired Hamilton County Judge Norbert Nadel, say the change isn’t necessary. Nadel says the state has been selecting jurors the same way “for centuries” and doesn’t need to switch now, which is always a very strong argument for any viewpoint.

• State lawmakers last year created a board that would ostensibly comb through more than $9 billion Ohio awards in state tax credits and exemptions. But eight months later, that board hasn’t even met yet. That’s no surprise — lawmakers hadn’t even started naming members to the board until after they were called out by a progressive think tank. After Policy Matters Ohio blasted out a news release asking about the state of the board and reporters began asking the same questions lawmakers rushed to announce appointments to the Tax Expenditure Review Committee Tuesday and Wednesday. House Bill 9, which created that committee last December, required it to hold its first meeting by June 19. Oops. The still-forming board has less than a year to release a report on whether the big tax breaks the state has given businesses and other entities has been effective in meeting stated policy goals such as job growth. This process reminds me a little of undergraduate group projects professors force students to work on, but hopefully the resulting report will be of higher quality and more useful.

That's it for the news today. No morning news tomorrow — I'll be out riding the Loveland Bike Trail up to Yellow Springs — but it'll be back next week. In the meantime, go get a burger, why don't you?