Library employee Rachel Dovel sued after the library's board refused to offer insurance coverage for her gender confirmation surgery. The library will now offer healthcare coverage for transgender individuals after settling Doval's suit. 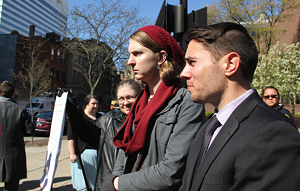 Rachel Dovel (middle) at an April 12, 2016 news conference outside the Public Library of Cincinnati and Hamilton County

The Public Library of Cincinnati and Hamilton County will change its healthcare plan to cover gender confirmation surgery and other transgender health care after it settled a lawsuit brought by employee Rachel Dovel, her attorneys announced yesterday. Last year Dovel wrangled with the library’s board over coverage as she sought to have gender confirmation surgery. The board flatly refused to pay for insurance coverage from provider Anthem Blue Cross and Blue Shield that covers the procedure and other healthcare for transgender individuals, so Dovel filed suit last September. She also took out a personal loan to have her surgery, which she had in December. The library’s new coverage takes effect Jan. 1 under the settlement.

• The public body that decides what goes on at riverfront development The Banks hasn’t held a public meeting since May 2015. But it’s met four times in private since then, according to public documents published by WCPO, and has considered questions around major moves like a proposal to bring the University of Cincinnati’s law school to the development, property purchases and other big initiatives. Some public officials, including City Council members, say they’d like more information about what’s going on with the development, which has about $100 million in taxpayer money tied up in it and sits on public land. The Banks Steering Committee is made up of powerful business and political leaders appointed by the county and city, including former Mayor Charlie Luken, 3CDC President Stephen Leeper, Cincinnati Reds President Bob Castellini, Bengals Vice President Katie Blackburn and others. It’s unclear to what extent the public group must follow open meetings laws and what constitutes a meeting of the group — steering committee members say it hasn’t met since 2015, though public documents show that various working groups with some members of the committee met in that time.

• This is very interesting to me since I’m on this website all the time, but hey, it could prove useful to you as well someday. The Hamilton County Clerk of Courts office launched a new website this week that has a more user-friendly interface and some enhanced features — including better mobile phone functionality and the ability to contest parking tickets online. (That should be pretty useful with parking ticket fines going up.) Clerk of Courts Aftab Pureval campaigned on promises to modernize the office, including revamping its online services. Pureval says he’s aiming to bring even more services online soon.I'm really going to miss the old site's khaki color palette and text-based role-playing game vibe, which I think looked great with the whole revival of 1990s-style aesthetics that's been going on.

• A Northern Kentucky prosecutor who had an affair with a detective who was investigating a case she was trying is facing calls to resign. The Boone County GOP voted yesterday to request that Boone County prosecutor Linda Tally Smith resign from her post because she’s “lost significant credibility in the legal community,” a statement from the political party says. That vote comes days after Boone County Judge J.R. Schrand announced he was granting a new trial for David Dooley, who stands accused of a high-profile murder. Schrand made that decision because  he said crucial evidence was withheld from the defense about the case, including video footage of another person at the murder site shortly before the killing of 42-year-old Michelle Mockbee. Smith was prosecuting that case even though she had had an affair with the lead detective investigating the murder.

• Is Ohio’s economy in a recession? Maybe not yet. But it’s also lagging behind national growth trends and in some ways has almost stopped growing entirely. There are a number of reasons for that — including an aging population, lack of new residents, its history as an industrial region in a post-industrial American economy and other factors.

• Finally, you probably already heard about a Washington Post story published yesterday that says President Donald Trump seems to have revealed highly classified intelligence secrets to Russian diplomats during a closed-door meeting at the Oval Office last week. Oops. If you didn’t, well, here’s some fallout from that story. White House officials yesterday denied that Trump had shared the classified information about terrorist threats — information so secret that it hasn’t been shared with many senators and others involved in national security. But Trump later defended revelations he made to Russian foreign minister Sergey Lavrov and ambassador Sergey Kislyak, saying it was his “absolute right.” The revelations come just days after Trump fired Federal Bureau of Investigation director James Comey, who had been investigating the Trump campaign’s potential ties to Russia.