Riccy Enriquez-Perdomo came to the U.S. from Honduras when she was nine and worked until recently at an Amazon warehouse in Hebron. ICE officers arrested her Aug. 17 at an immigration office in Louisville despite the fact she has legal status under DACA. 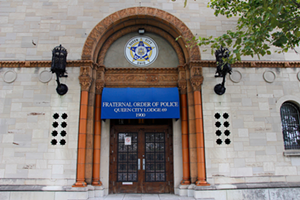 The Cincinnati Fraternal Order of Police will announce its endorsements for Cincinnati City Council today at 11 a.m. The FOP, which represents the Cincinnati Police Department’s 1,000-plus officers, is an influential union whose endorsement is often coveted by candidates. The announcement comes after the FOP has tangled with police reform advocates and Hamilton County prosecutors over the trial of former University of Cincinnati police officer Ray Tensing, leaving tensions between the union and some city officials.

• Immigration and Customs Enforcement officers have detained a Northern Kentucky 22-year-old mother of two who has legal immigration status under former president Barack Obama’s Deferred Action for Childhood Arrivals program. Riccy Enriquez-Perdomo came to the U.S. from Honduras when she was nine, and worked until recently at an Amazon warehouse in Hebron. ICE officers arrested her Aug. 17 at an immigration office in Louisville, where she had gone to post bond for another immigrant. Her last known location was an immigration detention center outside Chicago that is often the last stop before deportation. ICE won’t say if they plan to deport Perdomo, who was told her DACA status wasn’t a valid reason to protect her from deportation when she was arrested. Perdomo received DACA status in 2015 and renewed her immigration credentials Jan. 31 this year. The move comes as President Donald Trump says he’s mulling whether to eliminate DACA.

• Hamilton County sheriff’s deputy Josh Noel sent a woman he met on a traffic stop sexual videos and pictures of himself, according to charges filed in Hamilton County courts, and another woman says he sent her similar pictures as well, even after she told him not to. Noel, who has been with the department for about four years, faces two counts of telecommunications harassment and was booked at the Hamilton County Justice Center yesterday.

• Franklin Township trustees will meet tonight to discuss the fate of a controversial monument to Confederate general Robert E. Lee recently removed from the side of a road there. The City of Franklin took the monument, which was in a right-of-way owned by the city, in the middle of the night Aug. 17, causing consternation from some residents there. City officials turned the monument over to the township, which has remained mum about its plans for the plaque affixed to a large stone. Tonight’s public meeting by township trustees starts at 6 p.m. at the Franklin Township administration building.

• Northern Kentucky University will pay a $900,000 settlement to a woman who sued the school for mishandling her sexual assault allegations. The woman, who is anonymous in court documents, says the school allowed a man who sexually assaulted her during her freshman year in 2013 to continually harass her, even after it found the man responsible for the assault. The settlement comes after the woman’s lawyer, Kevin Murphy, alleged that the university withheld key evidence during discovery in the case around reports made to federal agencies about sexual assault response. NKU attorneys say the school was in the right, but that it agreed to the settlement to avoid dragging the case out.

• Troubled online charter school the Electronic Classroom of Tomorrow has made a last-minute bid to save its certification. ECOT wants to go from a standard online charter to a so-called “dropout recovery” school, which would place it under a laxer set of standards and potentially save its sponsor, Educational Service Center of Lake Erie West, from having to close down. The less-strenuous standards would mean that ECOT’s graduation rate of about 40 percent would merit an A rating instead of the F it currently rates, taking pressure off its sponsor, whose lagging ratings with the state mean it could close. That would mean 17 other charters it operates would have to find a new sponsor or close as well. The move, suggested by ECOT’s board, isn’t related to a $60 million clawback by the state of Ohio around faulty attendance figures at ECOT. State officials found during a series of audits that the online charter, which has an enrollment of about 13,800 students, had inflated its attendance records, resulting in requirements that the charter pay back the taxpayer money.