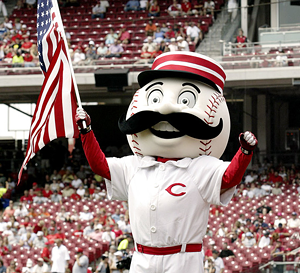 Good morning all. Let’s get right to some news.

This first bit of news was confusing and upsetting to me at first but I’m just going to give it to you straight without editorializing. Cincinnati’s venerable tradition, the opening day parade… won’t be on opening day next year. The Reds play their first game March 29, which is a Thursday, instead of the usual Monday. Findlay Market is usually closed on Mondays, making it an ideal time to stage an insanely huge parade from the historic market. But with the first game on a Thursday before Easter, the market will likely be very busy with vendors getting deliveries and folks buying Easter hams and whatnot. Instead, the 99th opening day parade will take place the following Monday, April 2. Market vendors said they debated for weeks about how to handle the situation before voting to move the parade. It’s the first time since 1995, the year of the MLB player’s strike, that the parade will take place on a different day than the Reds’ first game.

• Cincinnati is one of the top cities in the nation when it comes to evictions, a new study suggests. The research by rental website apartmentlist.com says Cincinnati’s eviction rate — 4.8 percent of the site’s users in the Cincinnati area reported they’d been evicted between 2015 and 2017 — puts it 10th on the list of the 50 biggest metro areas in the United States. Data on evictions is hard to find, but Pulitzer Prize-winning sociologist Matthew Desmond’s painstaking research on evictions in Milwaukee has focused renewed attention on the issue. It’s a pretty straightforward logical jump, but it bears mentioning that eviction is a leading cause of homelessness. It’s also a source of lagging educational achievement and childhood trauma for young people.

• Mayor John Cranley made a big campaign promise Tuesday: if re-elected, he’ll have a solution to the funding puzzle for replacing the crumbling Western Hills Viaduct in place by the time he leaves office. His plan hinges on a proposal by Hamilton County Commission President Todd Portune that would raise the county’s necessary local match through a $5 driver’s license renewal fee.

• Cranley and his opponent Councilwoman Yvette Simpson will go head-to-head in a virtual town hall hosted by The Cincinnati Enquirer and Fox 19 today at 11 a.m. With just a few weeks until the election, it promises to be an intense discussion. I’ve devised a fun little drinking game around how many times the following subjects come up: the streetcar, Children’s Hospital, fences around Winton Terrace, Police District 5 headquarters, the city’s Metro bus system, the word “collaborative."

• In other election news, The Enquirer has announced it won’t be making endorsements this time around. Instead, the paper will run a personal essay from each candidate and “an analysis of the strengths and weaknesses of each.” The paper will do the same for council candidates as the election approaches. Meanwhile, the paper continues to run columns from decidedly pro-Cranley opinion writer Jason Williams, though it has no other columnists running opposing viewpoints.

“We arrived at this decision after careful consideration,” the announcement from the Enquirer’s editorial board reads. “As a long-time voice of Ohio and the region, The Enquirer will continue to take a strong stand on issues of consequence, particularly now, during Cincinnati's renaissance. But the act of voting is intensely personal. We understand that. It is not our role to tell you who to value or what is most important to you.”

• Ohio's opiate addiction crisis costs the state a mind-boggling $6.6 billion-$8.8 billion a year, a new report suggests. The study by Ohio State University researchers suggests the state has the capacity to treat only about 20-40 percent of those addicted. The dollar toll of the epidemic is about the same as the amount of money the state spends on public primary education.

• Kentucky Gov. Matt Bevin made his strongest endorsement yet for a replacement for the Brent Spence Bridge during a speech in Erlanger yesterday. The bridge, nearly six decades old, carries I-71 and I-75 across the Ohio River. Daily traffic over the span is well above the amount it was designed for, and engineers say it’s functionally obsolete, though structurally sound. It will cost roughly $2.6 billion to replace the bridge, and some have suggested a bypass for the bridge through eastern parts of Northern Kentucky, but some transportation officials say that’s not feasible. Bevin said the bypass is needed, and could spur economic development, but that the alternate plan alone won’t be enough to address traffic capacity issues.