Democratic Hamilton County Commissioners Todd Portune and Denise Driehaus are taking their newfound majority on the three-commissioner board and putting it to work, adding $6 million in boosts to programs into the county budget. 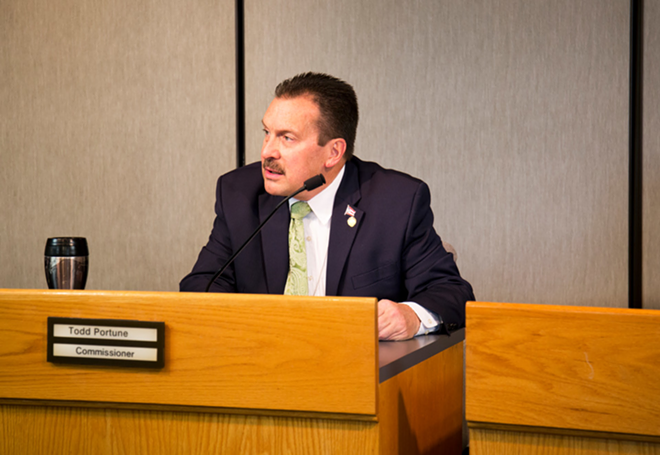 Good morning all. It’s a glorious day and you should be outside right now if you possibly can be. But stay with me for a minute (or grab your smartphone and read from it) so we can talk news.

Could city officials who support sanctuary city declarations like Cincinnati’s be ordered to enforce federal immigration law or ousted from office? That’s the intent of a new bill introduced by State Rep. Candice Keller, a Republican from Middletown. Keller’s proposed law would hold any city official who votes for sanctuary city designation liable if an undocumented person in their city commits a crime, and would allow a judge or jury to remove that official from office. The law would also require local law enforcement agencies to help enforce federal immigration law. Cincinnati Mayor John Cranley declared the city a sanctuary city in January, though the designation does not change any city policy. Cincinnati Police have long had a policy of not arresting individuals solely for their immigration status — one hallmark of sanctuary cities. Keller’s bill has the support of a few other Republican lawmakers, but not enough yet to pass the State House. No local state lawmakers have signed on to support the bill. Ohio Gov. John Kasich, a Republican, has decried sanctuary cities, but has said he doesn’t think a legal ban on them is necessary.

• Councilwoman Yvette Simpson yesterday unveiled her proposals for neighborhood development policies she would implement if elected mayor. Simpson is challenging Mayor John Cranley and is also dueling it out with former University of Cincinnati Board Chair Rob Richardson Jr. in the May 2 mayoral primary. In a news conference yesterday, Simpson said her plan would sort neighborhoods into three categories: “Ready” neighborhoods would first receive quality of life improvements via a model like the city’s current Neighborhood Enhancement Program, which uses targeted safety and beautification efforts through the city’s Department of Public Services to clean up communities. “Set” communities, which might be a little farther along economically, would see increased investment via partnerships between community development corporations, the Port of Greater Cincinnati Development Authority and other groups. “Go” communities where development is already happening will see increased scrutiny from the city to address traffic flow issues and ensure full community input into new development. Simpson also pledged to increase access to affordable housing and create a Community Engagement Officer at City Hall who will track community needs and feedback from residents.

• Mayor John Cranley yesterday held a news conference highlighting his work with the Ohio Innocence Project. Cranley appeared at downtown’s Hyatt Regency Hotel with several of the project’s exonerees and spoke about how the program has influenced his career. Cranley helped found the program, which has freed 24 wrongfully convicted people in Ohio, in 2003 when he was on Cincinnati City Council.

• Cincinnati City Council today could request a report on the possibility of equipping all Cincinnati firefighters with bulletproof vests at an estimated cost to taxpayers of $250,000. The city’s firefighters union supports that proposal, introduced by Councilman Christopher Smitherman. The city bought 180 vests for firefighters last year, but the union says they need 600 more, saying that firefighters often respond to situations in which gunfire is a possibility. Smitherman describes the proposal as a proactive measure.

• Democratic Hamilton County Commissioners Todd Portune and Denise Driehaus are taking their newfound majority on the three-commissioner board (rounded out by Republican Chris Monzel) and putting it to work. The two recently threw out a county budget approved by a then-Republican-led commission in December and added funds to the county’s Children’s Services department — which has been in need of more caseworkers for years — efforts to fight heroin addiction, a newly-created Office of Innovation and Creativity to spur economic development, about $800,000 in new transportation spending and $1 million for economic development, along with a few other programs. All told, these tweaks mean about $6 million more in spending, some of which will come from adjustments to other parts of the budget, the rest from reserves and levy funds. That has lone Republican Monzel worried. He supported the Children’s Services boost, but says other spending boosts are ill-advised. The county’s coffers depend largely on its collection of sales taxes, which net about $70 million a year. That revenue source is variable, however, and could leave the county with a deficit if it underperforms. And a tweak to the way counties can collect certain taxes from groups that manage Medicaid care could mean a chunk out of the county budget. But Portune says the budget is balanced and that the county is in “a very good state.”

• Finally, a federal court has ruled that a Butler County mother of four seized by Immigrations and Customs Enforcement agents should be sent back to Mexico, exhausting her legal options to challenge her deportation. Maribel Trujillo, who last year was awarded a legal work visa that would have allowed her to stay in the U.S. until July, was arrested last week near her home in Fairfield. Trujillo was undocumented but awarded the work visa after advocacy by a local church swayed federal officials. Authorities first held her in the Butler County Jail, then transferred her to the Morrow County Jail near the Columbus airport, which authorities use for deportations. She’s currently being held in an ICE facility in Louisiana and could be sent back to Mexico at any time. Trujillo’s case has drawn national attention and local backlash from faith leaders and immigration advocates, who say her family shouldn’t be split up, especially when she has a visa to remain in the U.S.