Sgt. Shannon Heine was one of two CPD officers who interviewed Tensing after he shot Sam DuBose during a traffic stop in July 2015. Despite DuBose being unarmed, Heine testified Friday that Tensing's actions "may be determined to be justified." 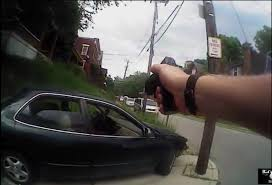 A Cincinnati Police officer testifying for the prosecution in the Ray Tensing retrial Friday said that she believed Tensing’s shooting of unarmed black motorist Sam DuBose "may be determined to be justified." Sgt. Shannon Heine was one of two CPD officers who interviewed Tensing after the shooting in July 2015. Heine also said that she didn’t see anything in the body camera video of the incident that contradicts Tensing’s version of events the day of the shooting. Tensing initially told fellow officers that he feared for his life because DuBose had dragged him with his car before the shooting occurred. The video does not show that, however. Tensing’s retrial continues today with expert witnesses testifying about that video.

• The owner and another high-level official of Newtown’s Evans Landscaping are facing a federal indictment on fraud charges, a U.S. attorney and FBI officials revealed Friday. Evans owner Doug Evans and the company’s vice president Jim Bailey are named in the indictment, which alleges that the company set up another front enterprise, Ergon Site Construction, in order to win bids with minority contracting requirements. Ergon is ostensibly owned by Korey Jordan, a former Evans employee. But federal officials say that Evans provided money to start the company, performed much of the work it undertook, and simply used the entity as a way to gain more than $2 million in city contracts for building demolitions. Evans denies the charges.

• A grassroots group called the Better Bus Coalition held a news conference Thursday afternoon downtown to call for a one-cent sales tax boost in Hamilton County to fund better public transit options. Coalition President Cam Hardy, a vocal transit advocate, said that the County’s current funding model for the Southwest Ohio Regional Transit Authority is unsustainable and that more money is needed to ensure adequate public transportation. A 2015 study found that some 75,000 area jobs are inaccessible by public transit. SORTA will vote June 20 as to whether to ask county voters for a 0.5 cent sales tax that would fund bus service, which is currently paid for mostly with city tax revenues.

• Will former Cincinnati mayor and noted talk show host Jerry Springer challenge Republican U.S. Rep. Brad Wenstrup for his seat in 2018? Maybe. The Democrat, probably best known for his long-running daytime TV show, commissioned a phone poll in Wenstrup’s district, which covers the mostly rural counties east of Cincinnati. Springer isn’t commenting on the poll right now, but such a move is usually a sign that someone is testing the waters for a campaign. Springer would have some work to do if he wanted to join the race, which already has two Democrats signed up to take on Wenstrup. He’d also have to re-establish residency in Ohio, where he hasn’t been a registered voter since 2006.

• State Rep. Alicia Reece of Roselawn is pushing her party to include more black women in leadership roles. Reece made that case during a one-on-one meeting with Democratic National Committee Chairman Tom Perez late last week. That talk came after 31 black women, including Ohio's U.S. Rep. Marcia Fudge, penned an open letter to Perez about their consternation over lack of effort by the DNC to include black women in the party’s upper levels. Reece, who is considering a run for the U.S. House district currently held by Republican Steve Chabot, will meet with Perez and his staff to further that conversation next week in Washington, DC.

• Finally, with Ohio facing an $800 million state budget shortfall, should it tap into the $2 billion in reserves sitting in its bank accounts? Some Democrats in the State House say yes. But Ohio Gov. John Kasich has waved off that idea. State Sen. Joe Schiavoni, who is running to replace Kasich in 2018, has joined other Democrats calling for state lawmakers to take 10 percent of those reserves and dedicate them to fighting the state’s opiate addiction crisis. But the Republican-controlled General Assembly has yet to do that, and doesn’t look likely to. Former Ohio Gov. Ted Strickland took a political pounding in the years after he spent the state’s reserve funds to shore up basic programs in the midst of the Great Recession.