President-elect Donald Trump has named former Ohio Secretary of State and one-year Cincinnati Mayor Ken Blackwell, a Republican, to head up his domestic transition team into the White House. 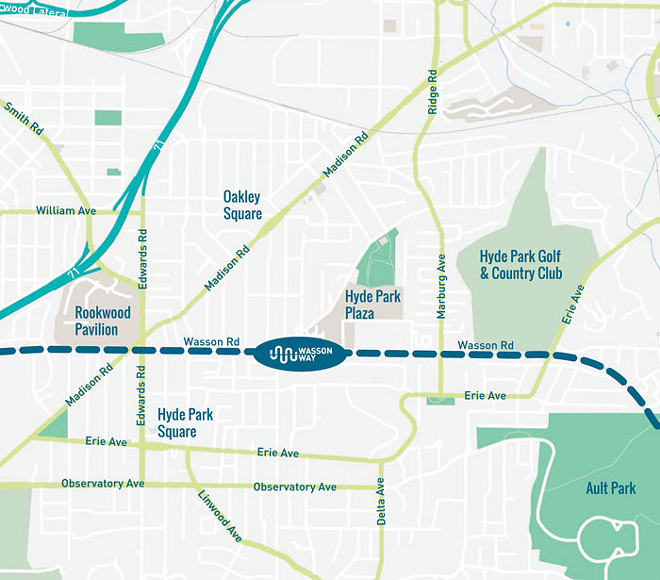 A map of part of the proposed Wasson Way bike trail.

Good morning all. Here’s some news for you today.

After days of waiting, the jury in the trial of former University of Cincinnati police officer Ray Tensing deadlocked on murder and manslaughter charges Saturday. Tensing shot and killed unarmed black motorist Samuel DuBose in Mount Auburn on July 19, 2015. The announcement that the jury couldn’t reach a verdict sparked a protest at the Hamilton County courthouse and a subsequent march through downtown and Over-the-Rhine, which drew more than a thousand people after meeting up with a nearby anti-Trump march. Next, Hamilton County Prosecutor Joe Deters must decide whether to retry Tensing. He says he’ll do that by Nov. 28. Check out our full story and photos from the march here.

• Here’s a big story we didn’t talk about last week due to the Tensing trial’s hustle and bustle: President-elect Donald Trump has named former Ohio Secretary of State and one-year Cincinnati Mayor Ken Blackwell, a Republican, to head up his domestic transition team into the White House. Blackwell is staunchly conservative and was a supporter of U.S. Sen. Ted Cruz’s bid for the GOP nomination during the presidential primaries. Blackwell will oversee the transition of nine agencies, including the EPA and the Department of Labor.

• Cincinnati’s West End just got more housing options for seniors as the former Sands Montessori school building opened up to new tenants. The building features 65 efficiency, one- and two-bedroom units for senior citizens with prices ranging from $259 to $675 a month. The renovation is one step in bigger efforts to bring new housing and business to the neighborhood. Construction giant Messer recently began building its headquarters in West End, and two other former school buildings could soon get residential rehabs as well.

• The city of Cincinnati just got a $750,000 federal Transportation Alternatives grant to help build Phase 2 of the proposed Wasson Way bike trail between Evanston and Hyde Park. Phase 1 is already funded and will begin construction next year. The trail will eventually go stretch 7.5 miles from Avondale to the Little Miami Bike Trail on the East Side, planners say, where it will link up with other networks of trails extending around the city and across the state.

• One of Northern Kentucky’s most successful breweries is expanding. Covington’s Braxton Brewery is making moves to more than double its output next year. The brewery is adding more fermenters to its facility so it can pump out 20,000 barrels of brew next year, up from the 9,000 it produced this year. That $100,000 investment is part of larger expansion plans the brewer will announce at a later date.

• Could ponds full of toxins leach into the Ohio River and force Greater Cincinnatians to drink bottled water? Or maybe beer? (See above story.) This piece by WCPO says it could happen. Some experts believe that more than 5 million people could be exposed to toxins left over from Duke Energy and other industries. Especially worrisome are coal ash pits, according to environmental scientists, which can release dangerous carcinogens into nearby groundwater and end up in major waterways like the Ohio.

• Finally, besides ex-Cincinnati mayors, who is Trump tapping as staff for his coming move to the White House? The names aren’t that surprising. The Donald has named GOP Chairman Reince Priebus as his chief of staff and former executive for conservative website Breitbart Stephen Bannon as a top advisor and chief strategist. That second name has set off alarm bells. The Anti-Defamation League and the Southern Poverty Law Center, both of which track hate groups, have called Bannon a “white nationalist” who has promoted hateful propaganda via Breitbart. Another civil rights group, the Center for American Islamic Relations, blasted the hire as well.

"The appointment of Stephen Bannon as a top Trump administration strategist sends the disturbing message that anti-Muslim conspiracy theories and white nationalist ideology will be welcome in the White House," CAIR executive director Nihad Awad said in a statement yesterday.

CAIR, the ADL and the SPLC have all called on Trump to reverse Bannon’s hire.