Critics are questioning the sale of city land near the MLK interchange to developers who have donated big to Mayor John Cranley's re-election campaign. 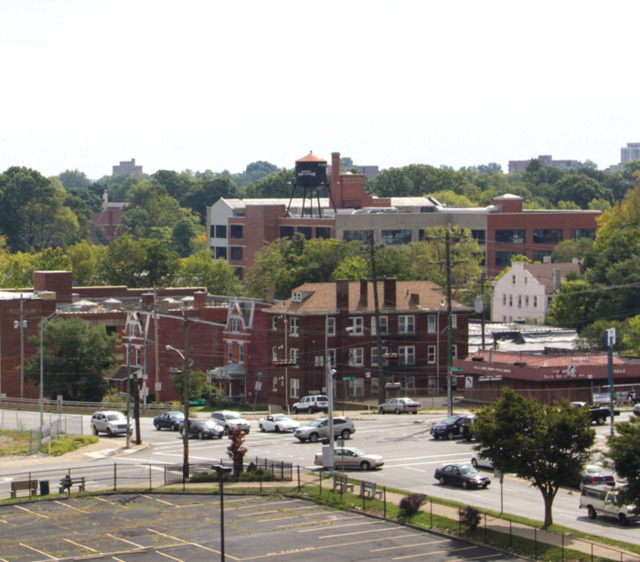 Nick Swartsell
Developers are moving fast to grab land near the new I-71 interchange at MLK Drive and Reading Road.

Happy Friday, Cincy. Let’s get straight to the news this morning.

Knowlton’s Corner in Northside could become a lot more rounded and less corner-ey. Err, OK, so that’s my weird way of telling you that Vice Mayor David Mann will hold a news conference today proposing that the busy intersection just after the I-75 overpass become a roundabout. We'll have more about that later today at citybeat.com.

• A group of big Cincinnati developers could soon purchase city-owned property around the recently-finished MLK/I-71 interchange in Avondale. The area has been the focus of development as a vital spot in a planned “innovation corridor” that is supposed to boost revitalization efforts in the area. That’s caused some controversy, however.

Last week, the city’s planning commission voted 5-1 to green-light the sale of the properties on the northeast corner of Martin Luther King Drive and Reading Road to a group headed by Neyer Properties, Kulkarni Properties and others. That caused some confusion from the Uptown Consortium, the group of uptown’s largest employers that has been heading up development efforts. Uptown called the sale “premature,” and Avondale Community Council opposes the deal, saying it won't benefit neighborhood residents. The community council's opposition comes after another high-profile fight over big development in the neighborhood — a half-billion dollar expansion of Children's Hospital. Critics of the new pending deal — which still must be approved by Council — point out that Kulkarni and Neyer are big donors to Mayor John Cranley. Kulkarni gave thousands to the mayor's 2013 campaign and has chipped in, through LLCs and donations to a Cranley-backing political group, more than $12,000 this time around. Neyer has given $18,000 through similar means to the mayor's current campaign. The mayor’s office has, of course, pushed back against any implications that the developers are getting special treatment.

• Rents in Cincinnati are heating up, mostly due to the increased construction of high-end luxury apartments and the relative lag of construction of other kinds of housing, according to this Cincinnati Enquirer story. While Cincinnati still isn’t into the nosebleed rents you’d find in San Francisco or New York City, and in fact is slightly below the national average, rates have been climbing faster than most cities. Famously expensive NYC’s average rents fell as Cincinnati’s rose. Is Walnut Hills the next Bed Stuy? Let’s hope not, right?

• Could Cincinnati land a new second headquarters for online retail giant Amazon? Well, it seems like a long-shot, but it would be huge if the city did. Amazon’s hunting for a place to put down $5 billion in new construction and employ 50,000 people. Not surprisingly, some local leaders are all about pushing to get the company here. Amazon’s announcement asking cities to pitch themselves says the company is looking for a place that has a population over one million — a criteria Cincinnati meets if you consider the metro area’s two million-plus people. At least one publication thinks Cincinnati stands a chance — PC Magazine put the Queen City at number five on a list of cities Amazon should look at, citing the company’s existing logistics hub in the area and historic downtown. However, I would take the article with a grain of salt — the author doesn’t seem to know much about the cities he profiles in the piece.

• Republican gubernatorial candidate Ohio Attorney General Mike DeWine looks pretty conservative — unless you really hate gun control. DeWine, a frontrunner in the GOP primary for Ohio governor, is facing a sharp challenge from Secretary of State Jon Husted, who is using the former’s consistent stance in support of gun control laws to whip up 2nd Amendment-loving conservatives. Husted has an A+ rating from the influential National Rifle Association and has put together a 16-member gun rights coalition including leaders from statewide groups like Ohioans for Concealed Carry, Buckeye Firearms and others. DeWine has better name recognition than Husted, but the latter could hit him hard with an issue very important to the GOP’s far right base.