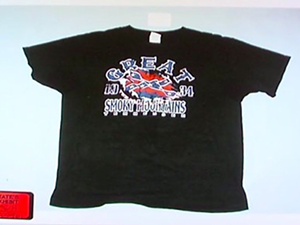 The T-shirt UCPD officer Ray Tensing was wearing under his uniform the day he shot unarmed black motorist Sam DuBose in Mount Auburn. Tensing's attorneys have filed to have the shirt barred as evidence during his retrial.

Hello all. Hope you had a fantastic weekend, soaked up the perfect weather and called your mom to wish her a happy Mother’s Day. If you didn’t, you better hurry up and do that now. Done? OK. On to news.

Hamilton County Prosecutors are looking into an assault against a Cincinnati Public Schools student at Carson Elementary in January that was caught on video. The student, 8-year-old Gabriel Taye, hung himself with a belt at his home two days after an incident in which another student pushed him into a wall. Taye was subsequently kicked and prodded by other students while he lay on the floor in the school’s bathroom. School staff sent Taye home and told his mother he had passed out because he was ill, not mentioning anything about what happened to Taye in the school’s restroom. An investigation in the weeks after Taye’s suicide by a Cincinnati Police Department homicide detective turned up the video. That detective said the incident bordered on criminal assault, but left discipline in the case up to CPS. The district seems to have taken no action, however. CPS released the video Friday, after initially refusing to do so.

• The director of a Cincinnati nonprofit is on leave and her organization is facing an audit after alleged financial discrepancies were uncovered last week. Keep Cincinnati Beautiful President Brad Lindner says there are big problems with the agency’s invoicing procedures that could signal a misuse of tax dollars and asked Cincinnati City Manager Harry Black to audit the agency and place director Mary Huttlinger on leave until it is completed. The city contracts with KCB on blight abatement efforts and has given the agency $1.3 million over the past two years. Huttlinger will be on paid leave until an audit of the nonprofit’s invoices for this year and last year is completed. She’s been head of KCB since February of 2016.

• Former University of Cincinnati Police officer Ray Tensing’s Confederate flag T-shirt should be evidence when he stands trial on murder charges for shooting an unarmed black motorist in July 2015, Hamilton County Prosecutors are arguing. Tensing’s defense attorneys have filed motions to have that shirt and other evidence dismissed from the former officer’s retrial later this month. More on that in our news feature this week here. A jury last November couldn’t come to agreement on murder and manslaughter charges for Tensing, leading to a mistrial.

• The Cincinnati Charter Committee released its endorsements for Cincinnati City Council late last week. The group, which advocates transparency and efficiency in government, gave first-time Council candidates Derek Bauman, Tamaya Dennard and Henry Frondorf the nod and also endorsed Council incumbents David Mann and Amy Murray. The Charter Committee, which grew out of political reform efforts following the downfall of George “Boss” Cox’s political machine in the early 1900s, is sometimes called Cincinnati’s third political party. It doesn’t run candidates of its own, but does provide endorsements and support for Democrats, Republicans and independents it perceives as proponents of good governance. The Committee recently endorsed Councilwoman Yvette Simpson in this year’s mayoral election.

• Will Democrats pull off a Hamilton County Commission sweep next year, unseating the commission’s sole Republican Chris Monzel? It’s a tall order, but it could be possible in the increasingly Democratic county. Late last week, Democrat Mount Healthy Mayor James Wolf announced he will challenge Monzel for the seat, citing new energy among Democrats here. And he might not be the only contender for the Democrats. Former county treasurer candidate Seth Walsh, Cincinnati deputy city solicitor Luke Blocher and Winton Woods school board president Jessica Miranda are reportedly also mulling a run for the seat. Democrats just recently gained control of the commission, which runs the county’s various governmental departments, with Democrat former State Rep. Denise Driehaus’ win over interim commissioner Dennis Deters last year. Monzel, who was president of the three-member commission before Democrats took the majority, could be a tough opponent, however. He’s popular with Republicans here and has a long track record in city and county politics.

• After they say they received death threats from supporters of conservative political causes, former and current employees at the Internal Revenue Service are fighting to keep certain testimony sealed in a U.S. District Court case against the IRS being heard here in Cincinnati. Those officials say the details about alleged bias against the tea party groups currently under seal by the court could compromise their anonymity and put them at risk after they received graphic and threatening death threats and other messages made to women who worked as officials at the IRS. They also say releasing the information in question wouldn’t serve any public purpose. But lawyers for various tea party groups say the evidence should be made unsealed, and that the public’s right to know what happened at the IRS’ Cincinnati office outweighs any danger to the employees there.

That office is home to the IRS’ nonprofit division, which processes claims for tax-exempt status by various groups. Officials say that office was overwhelmed by applications following the 2009 rise of the tea party and had trouble determining whether those groups were primarily engaged in political activity, which would preclude eligibility for tax exemption. A Senate investigation found that the office didn’t process the applications correctly or in a timely manner, but that it also did not engage in political bias in doing so. Some liberal groups were also selected for increased scrutiny under the system, though the huge surge in tea party activity meant that 80 percent of the delayed applications were for conservative groups.

• Ohio’s U.S. Sen. Rob Portman has found himself in the middle of the most contentious political debate in the country right now — Republican attempts to repeal and replace former President Barack Obama’s Affordable Care Act. Portman is one of a handful of GOP senators charged with amending the American Health Care Act, which Republicans passed through the House earlier this month. That bill would roll back Medicaid over time and could cost millions of Americans their health insurance, according to a Congressional Budget Office report on an earlier version of the legislation.

Portman has signaled he’s opposed to elements of the bill that would reduce Medicaid, at least without a longer period of time for a transition. About 700,000 Ohioans received health coverage under the ACA’s Medicaid expansion, and the service is key to fighting the state’s opiate addiction crisis, supporters say. Portman and the rest of the Senate will likely be caught in a tough squeeze on the bill, however. Republicans have a slim, 52-seat majority there, but are divided on the issue. Some, like U.S. Sen. Ted Cruz of Texas, want a much more conservative bill than the one the House passed, while others like Portman want something less harsh that preserves some of the coverage gains made by the ACA. With almost every Republican vote vital to the bill’s passage, GOP senators have a wide chasm to bridge.