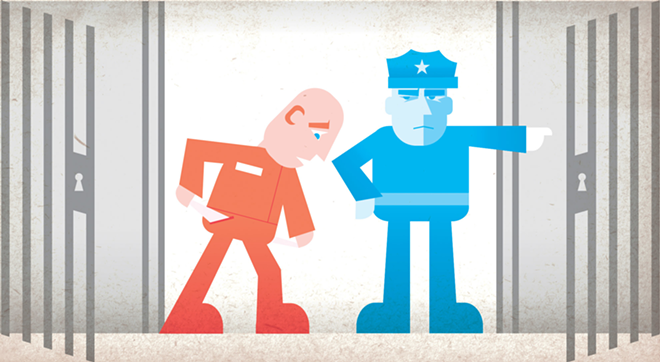 A new report from the American Civil Liberties Union of Ohio (ACLU) found Ohio's poor are regularly victimized by illegal practices in courts that jail the state's poor for failing to pay fines they can't afford. The problem particularly afflicts the state's rural counties, which sometimes openly admit to jailing people even when they can't afford to pay fines. The ACLU says courts need to be more transparent in communicating defendants' rights, provide retroactive credits to those wrongfully incarcerated based on circumstances of poverty and consistently hold hearings to assess defendants' financial viability and willfulness to pay fines.

The streetcar is being threatened by a $22.7 million budget gap, and Vice Mayor Roxanne Qualls, a Democrat who is running for mayor and has long supported the streetcar, is calling a meeting to get all the details on how the project got here and whether it's still economically viable. Qualls says it's too soon to jump to conclusions about the project's fate, and she says she would like to see the options and details laid out by City Manager Milton Dohoney Jr. at the hearing. But Democratic mayoral candidate John Cranley, a longtime opponent of the streetcar, is already using the news to call for the project's demise. The streetcar is one of few issues dividing the Democratic candidates in the mayoral race, which the latest poll has Qualls leading by 14 points.

The Ohio House is expected to vote on a budget today that would defund Planned Parenthood, ban comprehensive sex education and fund crisis pregnancy centers that promote abstinence-only, anti-abortion education. This week, the budget has been regularly mocked by Democrats for potentially opening teachers to lawsuits if they explain condoms, other forms of birth control and other basic sex facts to students in a way that could lead to "gateway sexual activity."

The Ohio House budget bill also fails to expand Medicaid — a failing that Moody's is warning could put hospitals at risk for budgetary shortfalls. The report points out that hospitals were supposed to get more patients through a Medicaid expansion, which would be funded almost entirely by the federal government through Obamacare, to make up for a reduction of federal reimbursements for uncompensated care. The Medicaid expansion would have insured 456,000 Ohioans and saved the state money, according to a report from the Health Policy Institute of Ohio. CityBeat covered the Medicaid expansion in greater detail here.

For student voters, the Ohio House budget bill would also make it more difficult to vote by forcing public universities to withhold essential documents that can be used as voter identification. The rule would make it so universities have to declare students in-state for tuition purposes when issuing them a letter or utility bill to vote, effectively costing universities extra revenue from out-of-state students if they choose to issue the documents. Democratic State Rep. Kathleen Clyde says the move will likely make it so universities never hand over the documents.

As the city wrestles with laying off cops and firefighters to balance the budget, Cincinnati Police Chief James Craig is considering a potential job offer in Detroit "very carefully." Craig interviewed for the top cop position in Detroit last week. "I'm humbled they would consider me a top candidate," Craig told The Cincinnati Enquirer.

Disbarred attorney Stan Chesley resigned from the University of Cincinnati Board of Trustees after being asked to by fellow board members.

Metro announced new direct, crosstown routes yesterday. The routes will make it easier to travel from the east to west side and vice versa.

The Business Courier has a look at the top 10 worst-paying Cincinnati jobs.

Five to 15 were killed and more than 150 were injured in a Texas fertilizer plant explosion yesterday.

Even though a majority of 54 voted in favor and only 46 voted against it, the background checks bill for gun buyers failed in the U.S. Senate yesterday, failing to overcome what was essentially a filibuster. Ohio's senators were split on the issue, with Sen. Rob Portman voting against the bill and Sen. Sherrod Brown voting in favor. Universal background checks are supported by more than 90 percent of Americans, according to a poll from The New York Times and CBS.