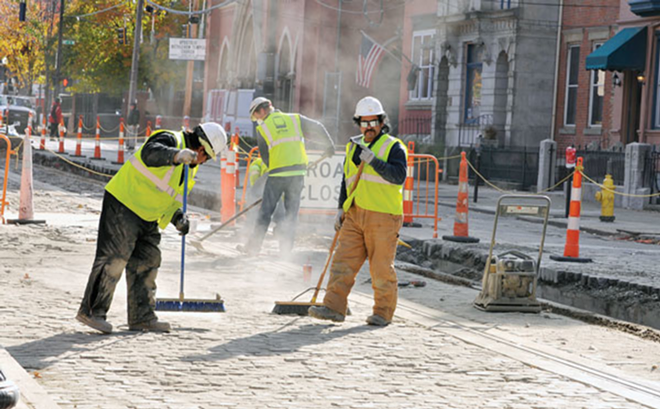 Morning all! Let’s get started on this news thing right away. I’ll be brief today.

Good news for transit drama junkies: The next episode of the streetcar soap opera just dropped, and it’s a double feature. Turns out the 2013 pause in streetcar construction while Mayor John Cranley railed against the project and Cincinnati City Council mulled pulling the plug could end up costing the city $2 million. The city has already spent about $1 million on costs associated with the pause, and now the team responsible for the streetcar is negotiating with a consultant involved in the construction of the streetcars over how much it owes for other costs related to the work stoppage. The cars themselves will be delayed six months because of the three-week pause, the streetcar team says, since the company making the cars thought the project was dead at the time. That cash will have to come out of the streetcar’s contingency fund, which will have about $1 million left after payments related to the pause are made.

Meanwhile, estimates for how much money the streetcar will rake in every year are down, according to the Southwest Ohio Regional Transit Authority. Adjustments in the way passengers will pay fares (by time spent on the cars, not on a per-ride basis), factoring in subsidized rides for low-income riders and revised advertising revenue estimates mean the streetcar is likely to pull in just $781,000 in its first year, much less than the originally-estimated $1.35 million. That means the transit project may have to tap into a $9 million fund provided by the Haile Foundation to help fund the streetcar’s first decade in operation.

• We’ve known for a while that the current site of the Anna Louise Inn, an historic women’s shelter downtown near Lytle Park, is slated to become a luxury hotel. Now we know which luxury hotel. Marriott announced yesterday it is bringing its Autograph Collection hotel concept to the site. Autograph Collection hotels are high-end, boutique accommodations. Others include European palaces and swanky hunting lodges. Plans have been in the works to relocate the century-old women’s shelter after a protracted and contentious legal battle between the city, Anna Louise Inn operators Cincinnati Union Bethel and insurance giant Western & Southern ended in 2013. A new CUB facility is being constructed in Mount Auburn.

• Lebanon City School District is facing a civil rights complaint from the mother of one of its students. Heather Allen has filed the complaint with the U.S. Department of Education alleging that issues of racial discrimination and bullying haven’t been taken seriously by the district. Allen says her biracial children, as well as other black children in the district, have been subject to racist jokes, taunting, repeated use of racial slurs including the n-word and an alleged threat from another student who Allen says had a knife. Nine incidents total are listed in the complaint, which comes a few weeks after an Instagram photo surfaced from a district student bearing racial slurs and a threat toward a black Lebanon student. The district thus far has not responded to media inquiries about the complaints, though it did address the Instagram photo, saying it didn’t have jurisdiction over that issue since it happened off school property.

• Former death row exonerees took to the capitol yesterday to advocate for changes to Ohio’s death penalty. Six men who had been wrongfully convicted of murder and who spent time in prison for their wrongful convictions gathered to urge lawmakers to adopt 57 recommendations for changes to the way the state administers justice made by the Ohio Supreme Court Task Force on Capital Punishment. Among them was Ricky Jackson, who was finally freed last November after spending 39 years in prison for a murder in Cleveland he didn’t commit. Jackson was exonerated thanks to the work of UC’s Ohio Innocence Project, an initiative co-founded by Mayor John Cranley in 2003. The Innocence Project is the subject of this week’s CityBeat news feature — it just won a new trial for three other Cleveland men who may have been wrongfully convicted in another murder. Check it out.

• Finally, your 2016 update: U.S. Senator Marco Rubio of Florida entered the presidential fold Monday, declaring he’ll seek the Republican nomination. Meanwhile, there is noise about who former secretary of state and current Democratic frontrunner Hillary Clinton will tap for vice president. Will it be former San Antonio mayor and current Department of Housing and Urban Development Secretary Julian Castro? Some think-piece writers think so. It seems clear that Castro, along with his brother, U.S. Rep Juan Castro, are both being groomed by the Democratic Party for bigger things. The Castro brothers are promising stars in the party, to be sure, but there’s also a pretty calculated element to the speculation: Rubio is strong with Hispanics thanks to his own Hispanic background, and Castro as VP could be a way to counteract that, political pundits say. Ew. Politics is gross.

That’s it for me. Tweet at me. Email me. You know the drill.