Ohio Secretary of State Jon Husted, a Republican, and Dayton Mayor Nan Whaley, a Democrat, have both thrown their hats into the ring in the race to replace Ohio Gov. John Kasich. 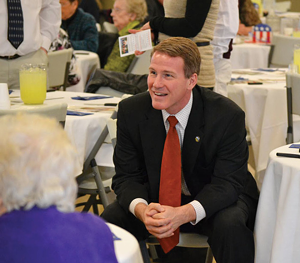 Hello Cincy. I hope your weekend was grand. If you ran the Flying Pig, hats off to you and I hope you’re able to walk this morning. I have a friend who ran it barefoot. I, meanwhile, ran four miles on a track this weekend. With shoes on. And I’m still sore somehow. Anyway, on to non-running-related news.

A big new project in Walnut Hills cleared a major regulatory hurdle Friday as the Cincinnati Planning Commission approved Milhaus Development’s plans for 124 efficiency, one- and two-bedroom market-rate apartments, 116 parking spaces and 4,000 square feet of retail space near the quickly redeveloping Peebles’ Corner corridor. The planning commission approved a zoning change that will allow the buildings to be larger than those normally allowed in Walnut Hills. The three buildings will sit on a currently vacant stretch of land along McMillan near Copeland, Kenton and Wayne streets, and will be three and four stories tall. The project is supported by the Walnut Hills Community Council, the Walnut Hills Redevelopment Foundation and the neighborhood’s business council. Supporters say the market-rate units in the so-called Firehouse Row development will be balanced out by other developments that will provide affordable housing nearby. All told, more than 250 new units of housing are scheduled to start construction in Walnut Hills this year. If the name Milhaus sounds familiar, you may remember them from the Gantry, their apartment project at the corner of Blue Rock Street and Hamilton Avenue in Northside.

• As we’ve talked about before here in morning news, Cincinnati Public Schools is about to decide on a new superintendent. Before CPS picks from its top two choices, community members will get a chance to meet them and ask questions tonight at Mayerson Academy in Corryville from 4 to 6 p.m. After receiving hundreds of applications from across the country, the district has narrowed its options down to current CPS Deputy Superintendent Catherine Laura Mitchell and Andre Spencer, who is currently the superintendent of Harrison School District in Colorado Springs, Colo. Spencer has been deputy superintendent since 2005 after working her way up from teacher and principal. Spencer, an Army veteran, is also a former teacher and principal.

• Speaking of opportunities for community discussion: The Southwest Ohio Regional Transit Authority is holding public input sessions for proposed service improvements to the city’s Metro bus routes. They’re hosting a slew of events this week throughout Hamilton County, including some today at the Green Township library branch from 11:30 a.m to 12:30 p.m., Westwood Town Hall from 2 p.m. to 3 p.m. and Anderson Center from 6:30 p.m. to 7:30 p.m. Tomorrow, Metro will bring the sessions to the library’s main branch downtown from 11:30 a.m. to 12:30 p.m., the Cincinnati-Hamilton County Community Action Agency in Bond Hill from 2:30 p.m. to 3:30 p.m. and the Reading branch of the library from 6 p.m. to 7 p.m. The sessions will also take place Wednesday and Thursday in Oakley, Harrison, Blue Ash and other locations.

• Six young people in Hamilton County have committed suicide this year, putting the area on pace again to be well above average when it comes to youth suicide. Last year, 13 people under the age of 18 killed themselves in the county — among the highest levels in the state. Franklin County, which contains Columbus, had seven last year and three so far this year. Cuyahoga County, where Cleveland is, saw three suicides last year and none so far this year. Researchers with the Ohio Department of Mental Health say the county is always a “high risk” area for youth suicides for reasons that aren’t entirely understood. Columbus and Cleveland and their suburban surroundings didn’t see a similar spike last year. Bullying, exposure to certain internet trends, mental illness, poverty and other factors could all play into the risks, experts say.

• Finally, the race to replace Ohio Gov. John Kasich in 2018 is heating up. The Big Queso is term-limited next year, leaving a void that many Ohio politicians are eager to vie for. Yesterday, Ohio Secretary of State Jon Husted, a Republican best known for his aggressive pursuit of new voting regulations, threw his hat into the ring, making a play for voters President Donald Trump wooed in last year’s presidential election. Meanwhile, Dayton Mayor Nan Whaley announced today that’s she’s in as well. Whaley and Husted will both face some competition in their respective party primaries, however. On the Democratic side, former state representative Connie Pillich of Cincinnati, state Sen. Joe Schiavoni and former U.S. Rep. Betty Sutton have all indicated they’re running. Republicans Lt. Gov. Mary Taylor, Ohio Attorney General Mike DeWine, U.S. Rep. Jim Renacci are all running. That’s a lot of folks, with more possibly on the way. It’s starting to look like a Cincinnati City Council race up in here.