Audrey DuBose, mother of Samuel DuBose, expressed frustration and anger at a panel on UCPD officer Ray Tensing's trial yesterday. “This man cold-blooded murdered my son, and the world saw it,” she said. “It’s right in our face. Why is there even a trial? 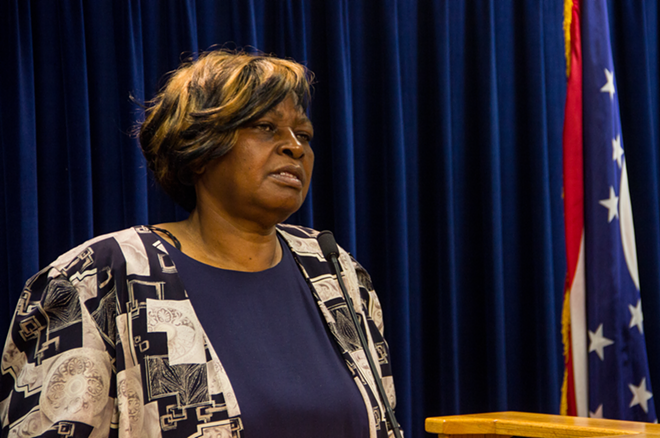 Good morning all. Here’s a little news for ya today.

Cincinnati City Council had a busy day yesterday, approving about $2 million in expenditures from the city’s budget surplus. That money will go to 15 measures like heroin overdose response ($76,000), a county-wide housing court proposed by Mayor John Cranley ($200,000), establishing a campus rape counselor position at Women Helping Women ($50,000) and $300,000 for the African American Chamber of Commerce. That last item got tricky after the surplus spending was passed — some council members, including Wendell Young, are seeking another $250,000 for the Chamber and were hoping the money would be included in the surplus ordinance. City administration presented Council with three possible sources for that extra money, and Council will need to decide which one to pursue. $500,000 of that money will go toward the Chamber’s new headquarters in Bond Hill, while another $50,000 will go toward operating costs. Young says the Chamber was promised the money last year, and he wants to make sure it gets the funding.

• Council also passed a water rate hike that will raise rates by 3.75 percent every year for the next five years. That money will be used for removing and replacing lead pipes, both those owned by the city and those on private property. Council members Amy Murray and Charlie Winburn, both vocal opponents of water rate hikes, voted against the measure. Councilwoman Yvette Simpson, among others, defended the rate hike, saying it was necessary to fund lead pipe removal for some of Cincinnati’s most vulnerable residents. The rate hikes were less than originally-proposed 7 percent hikes and last year’s 5 percent hike.

The panel included Councilwoman Simpson, who is also an attorney, former Hamilton County Judge Nadine Allen, who retired in August, and notable Cincinnati defense attorney Rodney Harris. UCPD’s Greg Baker was also in the audience and fielded some questions about the university’s reform efforts. Harris outlined procedural steps that will happen at the trial, including jury selection, possible defense strategies, the fact that officers have a wider latitude in arguing self-defense in situations like Tensing’s. Allen described the role judges play in murder trials, while Simpson outlined legislative angles to police oversight and reform. Among those in the audience were Audrey DuBose, who expressed her frustration and anger. “This man cold-blooded murdered my son, and the world saw it,” she said. “It’s right in our face. Why is there even a trial?” Stay tuned — we’ll be covering the trial extensively.

• Cincinnati police are warning pedestrians and motorists to be vigilant on the streets after a surge in pedestrian-involved accidents and deaths in the city. The issue has gained a higher profile following the death of popular Northside business owner Sarah Cole outside her restaurant Tickle Pickle last month after a car hit her. Six pedestrians in the area have been killed by cars in the past month in the Cincinnati area, according to WCPO, and another is fighting for life in the hospital after being hit downtown Tuesday. Police officials say much of it has to do with nice weather drawing more people outside. They also ask pedestrians to pay attention to motorists, even when they’re in cross-walks, which seems… well, maybe let’s tell the people driving the 2,000 pound lumps of steel to be careful more often? That’s just my opinion, though, as someone who walks or rides my bike to work every day and sees all the insane, stupid things people do in their cars from an outside viewpoint. Hell, I’ve even been yelled at for being in a cross walk and crossing on a walk sign. But I should be more careful, I guess.

• GOP presidential nominee Donald Trump will be in Cincinnati tonight at 7:30 at U.S. Bank Arena. It’s Trump’s first campaign rally in the city proper and something of a last-minute pitch to win over voters in Hamilton County, which could be a decisive part of a major swing state. We’ll bring you coverage of the rally should Trump’s camp give us access — we’re still waiting on the press credentials. There are also some anti-Trump protests planned for the areas outside the rally. We also have former president Bill Clinton coming to Cincy tomorrow. We’re important, y’all.