Councilman Seelbach is seeking to get historic landmark designation for the building itself. A similar tactic was used to stop the demolition of the historic former site of King Records in Evanston. 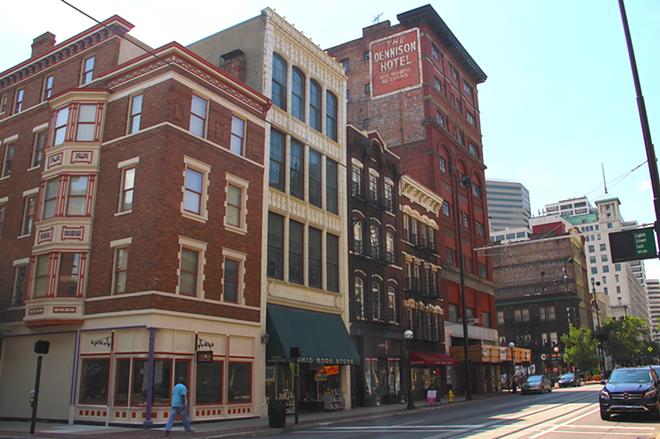 Good morning all. Here are some quick news bits for you today.

Councilman Chris Seelbach has introduced a measure that could save the embattled Dennison Hotel, the 124-year-old downtown building owned by a real estate arm of Cincinnati car dealership magnates the Joseph family. The building, designed by the firm of noted architect Samuel Hannaford, sits in a historic district. Earlier this year, the city’s Historic Conservation Board denied an application by the Josephs to demolish the building, but the city’s Zoning Board of Appeals reversed that decision. Seelbach, however, is seeking to get historic landmark designation for the building itself. A similar tactic was used to stop the demolition of the historic former site of King Records in Evanston. If Council approves the measure and it stands up to HCB scrutiny, the Dennison could be spared from demolition.

• Consternation continues over emails sent between Mayor John Cranley and Chicago Mayor Rahm Emanuel regarding the dismissal of former Cincinnati Police Chief Jeffrey Blackwell. As we told you yesterday, Cranley in those emails seems to state he had a role in Blackwell’s firing, and that the city’s black police union The Sentinels supported him in that decision. The Sentinels have since fired back, saying they did not support the chief’s dismissal. And critics have pointed out that Cranley initially claimed that Blackwell’s ouster was the decision of City Manager Harry Black.

Cranley has said that Blackwell’s firing came after repeated complaints about low morale in the department and reports that the chief abused his power and wasn’t well-liked by many officers. Councilman Wendell Young, a former CPD officer himself, has called a press conference tomorrow to discuss the emails and Cranley’s role in Blackwell’s firing. Former mayor Dwight Tillery, Cincinnati NAACP President Robert Richardson, Rev. Bobby Hilton of the National Action Agency and Cranley’s mayoral opponent Councilwoman Yvette Simpson are also scheduled to be at that press conference. “There is absolutely no question in my mind that Chief Blackwell was fired unjustly and Mayor John Cranley was the principal leader of his termination," Young said in a statement announcing the news conference.

• Northern Kentucky's Ark Encounter, a biblical theme park, has been lit up in rainbow colors this season. But Christian fundamentalist owner Ken Ham didn't have a change of heart about LGBTQ issues. No, instead he wants to "reclaim" the rainbow, a long-standing symbol of gay pride, and make it a Christian icon symbolizing Noah's covenant with God instead of "freedom, love, pride or LGBTQ movement," Ham said in a post on Ark Encounter parent organization Answer In Genesis' website recently. Just... wow.

• So medicinal marijuana is legal in Ohio… now what? It turns out there are still more questions than answers when it comes to how the state’s medical weed industry will operate, who will grow the marijuana, who will be able to vend it, how many doctors will prescribe it and other big details. The Ohio Department of Commerce has pushed for 12 large grow sites — each about 15,000 square feet — as well as six smaller grow sites of about 1,500 square feet. Some legal weed advocates worry that won’t be enough to meet demand generated by the estimated 10 percent of Ohio’s population that will seek prescriptions for the drug. There are plenty of other wrinkles to be hashed (ha, sorry) out over the next couple years. You can read more about all the uncertainty here.

• Finally in this truncated edition of morning news, let’s revisit a statewide story we told you about yesterday. Ohio Gov. John Kasich has vetoed a measure passed by the Republican-led Ohio General Assembly that would have made the state’s renewable energy standards voluntary for the next three years. Kasich, bucking his own party, wants to keep the standards, which dictate how much of the state’s energy comes from renewable energy, compulsory. That’s drawn backlash from conservatives, including Cincinnati-area State Senator Bill Seitz, who went all out attacking Kasich. Seitz basically did everything but call Kasich a card-carrying commie in a statement released after the governor’s veto, invoking President-elect Donald Trump and his “amazing cabinet of free-market capitalists” as the cure for Kasich’s “regulatory overreach and “Al Gore style policies.” Yowza. Tell us how you really feel.  Kasich also used a line-item veto to scratch out an item in another bill that gave a tax exemption to oil and gas companies. Lawmakers could return over the next couple days to try and override those vetoes.