Councilwoman Yvette Simpson and Mayor John Cranley sparred for a final round yesterday on transit, violence prevention and other issues. We're totally going to miss all the debating. 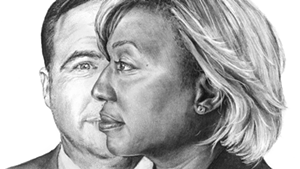 Good morning all. Here’s some news for you today.

It’s sad, I know, but with Nov. 7 breathing down our necks, we’re getting near the end of election season. Yesterday, Mayor John Cranley and Councilwoman Yvette Simpson had their last of more than a dozen debates (I’m sorry, “candidate forums”) on local NPR affiliate WVXU. Transit was a major theme of the hour-long conversation, with Simpson and Cranley wrangling over the details of each others’ proposals to fix the city’s sagging Metro bus service. Cranley supports a .5 cent county sales tax boost the Southwest Ohio Regional Transit Authority will put on the ballot next year. Simpson, citing a study that suggests Metro will need $1 billion more over the next decade, says that Metro needs more revenue, but that Cranley’s proposal alone won’t net enough new money to make a dent. She would like to redo the city’s bus routes and move it away from a hub-and-spoke system. The candidates also debated over approaches to reducing crime — Simpson touted her preventative measures through an approach that treats violent crime as a public health problem, while Cranley promoted his work with state and federal law enforcement officials to reduce gun crime. The two also revisited an argument over the city’s property tax rates. Cranley in 2016 vetoed an attempt by Council to keep the city’s property tax rate the same, instead opting to lower the rate. At the time and in the debate yesterday, the mayor called council’s attempt a “tax hike,” though Simpson and other councilmembers see it differently.

• Another thing that came up in yesterday’s final debate: the city’s bid to win Amazon’s second headquarters, a multi-billion project that could create as many as 50,000 high-salary jobs. So how much of a chance does Cincinnati have of landing Amazon? Actually, the odds are not that bad, a new study suggests. A ranking by real estate research firm Reis, Inc. put Cincinnati at 13th on a list of cities most likely to score Amazon’s $5 billion HQ2. Mega cities New York, San Francisco and Washington, DC topped the list, of course, with their high costs of living and doing business offset with their cultural amenities and access to an educated workforce. Cincinnati’s score was buoyed by its urban amenities and quality of life numbers, but lack of access to modern transit sank its rating. New York, the top city on the list, scored big due to its robust transit infrastructure. Cincinnati has offered Amazon a 15-year tax incentive deal that would refund 85 percent of the city's earning taxes back to Amazon and give the company a 100 percent property tax abatement.

• More election news: As he pitches his reelection bid, Cranley reached out last night to downtown residents with a meet and greet organized by supporter Brian Muething. In an email inviting downtown residents to attend the event, Muething said the mayor’s campaign felt it hadn’t spent enough time talking with residents of the Central Business District about issues facing the city. That email stressed that the gathering wasn’t a fundraiser. Muething is the spouse of Cincinnati City Solicitor Paula Boggs-Muething; the event was held at a condo on Fourth Street that she owns.

• Ohio Democratic Party Chair David Pepper will file an election ethics complaint related to a spate of anti-Cranley fliers currently going to voters. The election material criticizes Cranley on his treatment of black leaders in the city and questions his financial management abilities. The material is harshly worded — and also doesn’t disclose who paid for it, a violation of election law when election materials costs over $100 to produce. Pepper calls the material “egregious.” Similarly harsh mailers have been produced attacking Cranley opponent Yvette Simpson, usually funded by so-called “dark money” groups who don’t have to reveal their donors.

• A historic landmark in Over-the-Rhine is about to get a little more prominent. The Woodward Theater, built in 1913 in the Beaux Arts style, won $150,000 to recreate a lighted marquee that once adorned the building. Promoter Dan McCabe and partners began renovating the Woodward in 2013 as a concert venue. Their project placed eighth in Partners in Preservation: Main Streets, a vote-driven competition for grants funded by the National Trust for Historic Preservation, National Geographic, Main Street America and American Express. Work on the marquee will begin in mid-2018, McCabe says.

• Following a rash of cancer cases among employees, city officials have asked the National Institute of Occupational Safety and Health to perform a cancer cluster evaluation for Cincinnati Police District 5 headquarters. NIOSH is the federal agency dedicated to workplace safety research. Six CPD employees working at the facility have been diagnosed with cancer in the past two years, and the city has made moves to relocate employees from there by the end of the year. The Fraternal Order of Police has asked that employees be removed immediately, however, and has threatened a lawsuit if they aren’t.

• U.S. Rep. Steve Chabot has steered more than $150,000 in campaign-related contracts to his son-in-law, The Cincinnati Enquirer reports. Right Turn Design is owned by Kevin Bischoff, who is married to Chabot's daughter. Chabot has paid the company the six-figure sum from campaign funds for web consulting — a move that ethics experts say is perfectly legal but also smells like nepotism.

• Ohio Supreme Court Justice and freshly-minted Democratic Party gubernatorial primary candidate Bill O’Neill will recuse himself from taking cases until February, he announced yesterday. That comes after a flurry of criticism from Republicans and others after his announcement Sunday that he was running for governor. O’Neill’s critics point out that Ohio ethics laws prohibit judges from engaging in political activity while they’re on the bench. Ohio State Auditor David Yost, a Republican, took to Twitter this morning to suggest that O’Neill’s recusal isn’t enough, charging that the judge will still get paid but won’t be doing any work. O’Neill says he won’t be officially running for office or raising money until next year, and thus isn’t required to step down from his position.

"I will not be participating in any new matters submitted to the Court from this date forward until February 7, 2018," O'Neill wrote in a letter to the court. "I will continue to vote on and participate in the resolution of the approximately 99 cases which have been submitted and not yet released."