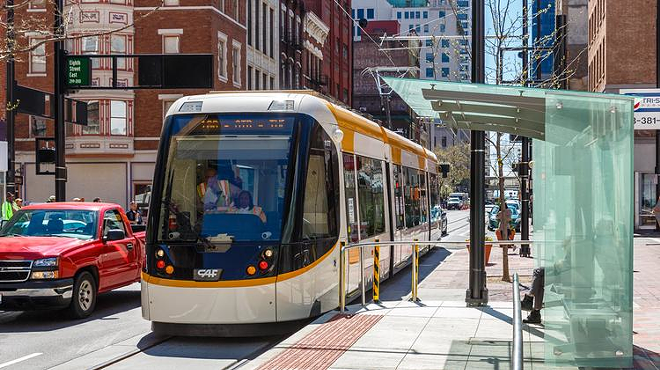 The big news, of course, is that the streetcar has a major official sponsor. Cincinnati Bell yesterday announced that it will pay $3.4 million over the next 10 years for naming rights for the streetcar, which it will call the Cincinnati Bell Connector. Cincinnati Bell’s logo will also appear in various locations on the cars themselves as well as on the streetcar stops. The new designs will debut Sept. 9, according to the city. Revenue generated by the agreement for the Southwest Ohio Regional Transit Authority will be used to fund the streetcar’s operations. The marketing agreement is a big win for the transit project, which has seen questions around its operating budget over the last year.

• As we told you about yesterday, Cincinnati City Council is working to block Duke Energy from an exemption that would allow it to shut off customers’ power without an in-person visit beforehand. The energy company has filed a request with the Public Utilities Commission of Ohio that, if granted, would allow Duke to shut off customers’ power remotely when bills haven’t been paid. But a supermajority of Cincinnati City Council and Mayor John Cranley have signaled support for an ordinance that would ask PUCO not to grant the exemption and devote the city’s legal resources to fighting the request. Councilman P.G. Sittenfeld spoke at City Hall yesterday with attorneys and activists from Communities United for Action, Santa Maria Community Services and other organizations who say the action by Duke would have a huge negative impact on Cincinnati’s low and moderate income residents.

• Cincinnati’s Minority Business Accelerator has gotten some national support in the form of a big grant. The group, founded in 2003 to help get minority-owned businesses with at least $1 million in revenue and potential for growth to the next level, will get $300,000 over the next two years from the Surdna Foundation, which is based in New York. It’s not the first time the foundation has given to CMBA — the accelerator has received $700,000 from Surdna since 2013.

• Covington’s mayoral race is getting more interesting as a challenger to Mayor Sherry Carran has scored a major endorsement. The city’s Fraternal Order of Police has backed Joe Meyer, the former state secretary of education and state senator, as its pick in the race. Meyer has promised to find ways to increase police spending in the city’s budget, though the mayor has only a minor role in that process. Covington’s current administration points out that there are 32 new police cruisers set to arrive for the department, addressing one of the main complaints from the FOP. The union has had a rocky relationship with city government for years, including a dustup where the FOP filed complaints with the Occupational Health and Safety Administration over whether the city would replace some outdated bulletproof vests officers used. The city says it had full intentions of doing so before the complaint, and was just figuring out the best way to pay for them.

• A couple national stories of note: You’re going to need to start looking for new purveyors of your hardcore snark and gossip because soon, Gawker.com will be no more. The site announced it is closing up shop next week after its parent company, Gawker Media, was purchased by media giant Univision recently. Univision will continue to run the rest of Gawker’s properties, which include six other popular websites. The collapse of Gawker came after Hulk Hogan leveled a multi-million lawsuit against the site for publishing a sex tape made by Hogan and the wife of a friend of his. That lawsuit was backed by billionaire tech mogul Peter Thiel.

• Also of note: GOP presidential nominee Donald Trump apologized yesterday. Sort of. In a speech in North Carolina, Trump said that he sometimes “says the wrong things” in speeches and that “believe it or not,” he “regrets it.” Just when you thought Trump couldn’t surprise you anymore, he does. And then… he doesn’t. Trump ended that part of those prepared remarks by adding, “But one thing I can promise you is this: I will always tell you the truth.”

The remarks come as Trump continues to draw controversy over his statements, even from members of his own party, and as his poll numbers continue to slide. They’re a bit of a walk back from his usual bombastic rhetorical style, but the caveat at the end suggests we won’t be seeing a kinder, gentler, more truthy Trump any time soon.