You can ride the streetcar back from the Bengals game tonight, which is good, because it's really hard to drive and cry at the same time. 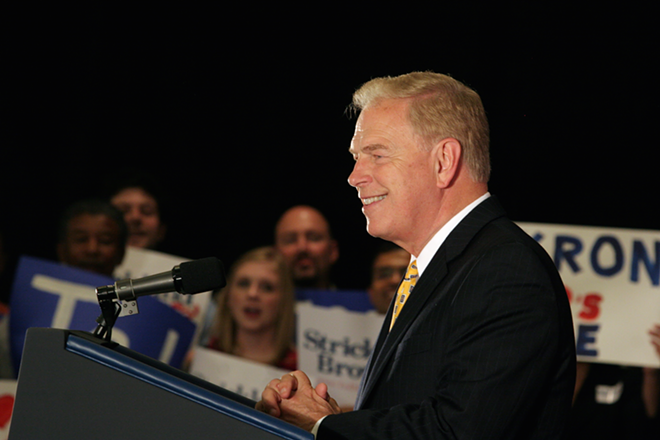 Hello all. Here’s a little bit of news as we head toward the end of the week.

If you’re heading downtown to watch the Bengals take on the Dolphins tonight, you’ll be able to take advantage of later hours for the streetcar, presumably because it’s very difficult and dangerous to cry and drive at the same time. (Our guys in stripes have lost two of their last three.) The Southwest Ohio Regional Transit Authority has pressed an extra car into service and will keep things running all the way up until 2 a.m. if necessary. SORTA is experimenting with demand-based service for the streetcar for special events and says the extra riders should pay for the extension in hours.

• Former Cincinnati Police Chief Jeffrey Blackwell is in the hospital in Columbus after suffering a stroke Tuesday. Blackwell, who was fired by city administration in a controversial move back in September of 2015, was best known for his community engagement efforts and his rapport with everyday folks. His family released a statement yesterday asking for privacy and saying that the former chief isn’t ready for visitors or phone calls but is fighting to make a complete recovery.

• Cincinnati City Council yesterday took the first steps (sort of) toward deciding what to do with a $16.6 million budget surplus that came from lower expenditures and increased revenues. Council passed a resolution putting that money into a reserve fund as it hammers out permanent plans for the cash. Those will more than likely include more funding for anti-heroin efforts, money for city employee raises and other items. Still up in the air: whether the African American Chamber of Commerce will see a promised funding boost from the extra money. Some council members, including Yvette Simpson and Wendell Young, are adamant about including the Chamber in the windfall spending. The city administration’s initial proposal for the extra money, however, did not involve any funds for that group.

• Is Hamilton County Sheriff Jim Neil walking on thin ice as he tries to avoid politics in a re-election year? Or is he just playing it cool because he’s focused on his job? The Democrat has kept a fairly low profile during a campaign in which his challenger, Republican and former Cincinnati Police Department captain Gary Lee, has released dramatic video ads slamming Neil for releasing prisoners early from the Hamilton County jail. Neil’s response to those charges has been little more than a disinterested eye-roll. He released a statement acknowledging that jail overcrowding is an issue and stating that he hasn’t released any prisoners early in the past month, but Neil hasn’t really hit Lee back in any way or highlighted moves he’s taken since gaining the office four years ago that make it more difficult for prisoners to be released. He has also refused to debate Lee or pay much attention to him at all, really. It’s an interesting choice of strategy, or lack of strategy, perhaps. Neil hasn’t always been the most politically adept of campaigners. In the spring, he appeared at a rally for GOP presidential nominee Donald Trump, which is a strange thing for a Democrat to do. Members of his party howled at that move, and Neil later apologized.

• Speaking of Donald Trump and intra-party awkwardness: Ohio Gov. John Kasich, a Republican, is still shit-talking his party’s nominee for president. Kasich called proposals by Trump to ditch NATO and retreat from global trade deals “crazy” at a foreign policy forum in Columbus yesterday. Kasich, a former primary opponent to Trump, has been one of his staunchest and most high-profile critics within the party, sticking to his Never-Trump guns even after fellow former primary opponents like U.S. Sen. Ted Cruz have fallen in line and endorsed The Donald.

• Ohio is restarting a program to help out of work homeowners overwhelmed by mortgage payments in an effort to head off foreclosures. Save the Dream Ohio, a state-funded initiative administered through the Ohio Housing Finance Agency, will provide up to nine months of mortgage payments to homeowners. The program is open to homeowners who were eligible for unemployment benefits — that is, those who were laid off or lost their jobs because their employer went out of business — from 2014 on. An earlier version of the program that started in 2010 helped more than 24,000 people in the state with their mortgage payments, and the state says 98 percent of those homeowners managed to stay in their homes.

• Finally, as former Ohio Gov. Ted Strickland fights an uphill battle for the for U.S. Senate held by incumbent Republican Rob Portman, how should voters weigh his economic record during his tenure as governor? Strickland presided over Ohio’s economy during the rocky years of the Great Recession, when thousands of jobs fled the state or simply disappeared altogether. Republicans have hammered the former governor on those job losses, but Strickland and other Democrats say he did everything he could to keep jobs in the state and had some notable successes. So… who’s right? As you might expect, most economists say the truth is somewhere in the middle. It’s absurd, experts say, to blame a governor for a global economic crisis, but that doesn’t mean Strickland didn’t miss some opportunities. As the former governor points out, however, he also had some victories. Strickland is currently down big in most polls to Portman, who has cast the former governor as much of the reason for Ohio’s bad turn in economic fortunes. Strickland has blasted back over Portman’s support for GOP presidential nominee Donald Trump and his previous support for trade agreements like NAFTA that many say have led to more American jobs leaving the country.