Moving Up, Moving Out 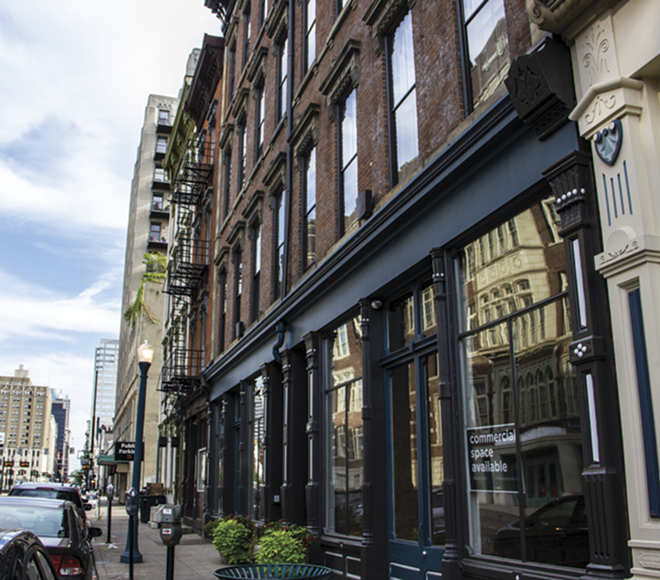 For the past year, Reginald Stroud has lived in a tucked away dead-end street in Northside. His block is buttressed on one side by the steady hum of traffic on I-74 and the quiet of a large wooded cemetery on the other.

Before he moved to this somewhat isolated spot, Stroud had a far different lifestyle in his two-bedroom apartment just a block north of Central Parkway in Over-the-Rhine. The building he lived in at 1123-1125 Walnut St. also housed both his convenience store and karate studio, which he says put him at the center of a tight-knit community of longtime OTR residents.

His departure, spurred by the redevelopment of the building in which he lived and worked, underscores the complex changes taking place in Cincinnati’s hottest neighborhood. As buildings like the one Stroud lived in become attractive for renovation, longtime residents find themselves looking for new places to live — sometimes outside OTR. While many praise the neighborhood’s facelift — the result of a decade-long, roughly $400 million project — others question the shifts.

For former residents like Stroud, change comes with a sense of loss.

“I loved everybody,” Stroud says from the tidy living room of the Northside house he currently rents. “And everybody knew me. I was the karate man, I was the candy guy. That community, I miss.”

Some advocates say longtime residents are being pushed out of the neighborhood as developers renovate historic buildings and raise new structures for high-rent apartments and condos that now, at times, cost $500,000 or more. Meanwhile, median incomes and average rents are rising fast. And in 2014, OTR had the highest average rise in property values of any place in Hamilton County.

Rising housing prices have sparked big concerns in the historically low-income, predominantly black neighborhood. Current data on housing in OTR is hard to come by, but a 2011 study found about 1,000 units of subsidized housing in OTR out of about 3,600 total occupied units. Advocates say that number used to be much higher.

Forthcoming studies could shed better light on just how affordable the neighborhood really is. This spring, the Over-the-Rhine Community Council commissioned Xavier University’s Community Building Institute to do a study on housing costs in the neighborhood. The data should be released by the end of September, according to CBI’s Elizabeth Blume.

Development in OTR has, until recently, been limited to the southern part of neighborhood, where the building Stroud lived in is located. Those efforts have changed the economic, and perhaps the racial, makeup of the area. South of Liberty Street, the median household income for the once-impoverished neighborhood is $40,000 and rising, according to 2010 Census data. North of Liberty, where little development has occurred, the median income is just $11,000.

For decades, OTR has been majority black, a holdover of the city’s demolition of a large part of the West End in the 1960s, which caused many blacks to move east into the neighborhood. But recent Census data suggests that might be changing in some parts of the neighborhood that have seen large-scale redevelopment.

The Census tract encompassing the southern part of the neighborhood, including Stroud’s former home on Walnut Street, was nearly 60 percent black just a few years ago, according to the 2010 American Community Survey. The tract’s population rose from just over 700 that year to more than 1,000 three years later, according to the ACS, but the black population dropped by about 100 during that time, accounting for just 36 percent of the neighborhood by 2013. Since that time, the area has seen even more rapid development.

The ACS isn’t as precise as the 10-year Census, and the changes can’t be definitively attributed to gentrification. But the data does seem to show a clear decrease in black residents in the area. Some say that’s due to redevelopment.

“I knew it was coming,” says Stroud, who is black, of the changes to the neighborhood. “I just didn’t know how the change would occur or how it would affect me. I’ve seen a dramatic transformation. People used to have barbecues and sit in lawn chairs on Vine Street. It’s different now.”

Developers and others active in OTR’s redevelopment say they value diversity, and that the revitalization of OTR will benefit everyone. After leaving the neighborhood, though, Stroud sees it differently.

“Gentrification is just a nice way of putting it,” he says. “It’s trying to move a certain type of person out of the community and replace them with a different type, a middle-class or upper-middle-class person.”

Stroud left the buildings on Walnut last summer after its then-owners, led by Hyde Park-based developer Chip Hunter, defaulted on a $225,000 loan from the city. After the default, downtown developer Urban Sites took possession of the buildings and began making plans to redevelop the property.

“The building’s mechanical, electrical and plumbing systems and roof all required major repairs or replacement,” says Urban Sites Executive Vice President Seth Maney. “The building was unsafe, unsanitary and economically unsustainable — as evidenced by the previous owner’s inability to pay the city loan.”

Stroud says it was hard for him to find anything in OTR as affordable as the $635 a month he was paying for his place. That meant widening the search and ending up in Northside. Relocation from the building he lived in also meant the end of his decade-old store and karate studio, plus the difficulty of moving his family of five and his two businesses in 45 days.

Maney says the building was an unusual case and that the developers’ numerous other renovation projects in Over-the-Rhine are done in vacant properties that don’t require tenant relocation.

But at least a few projects by other developers have led to tenants being asked to leave. Just two blocks north of the building Stroud once occupied, the Cincinnati Center City Development Corporation is working with developer Model Group on the so-called Columbia Building at 1301 Walnut, undertaking a full-scale renovation there. That work, as well as work on two other buildings nearby on West 12th Street, will require the relocation of some 70 residents.

3CDC, which has led redevelopment efforts in OTR, has said the buildings it is rehabbing have been problem areas with high crime and poor upkeep, and that most of the residents there are glad they’re being offered the chance to move somewhere else. The developer has offered help and funds for relocation.

Affordable housing advocates and some building residents, however, have a somewhat different take.

James McQueen moved to the West End from the Columbia building in November after more than a decade there. He says he appreciates certain aspects of the situation — the fact that he was given plenty of time to leave and that, should the building be renovated as subsidized rather than market-rate housing, he could come back. But he says he’s skeptical that will happen and that he didn’t want to leave in the first place.

“We all cared about each other,” says McQueen of his neighbors in the building. “It was a family-type building, and I miss that.”

What the Columbia building will become is still in the planning stages. But Stroud’s old building has already taken on a new life: It is now home for entrepreneurs visiting Cincinnati as part of local business incubator The Brandery’s yearly start-up class. In addition to providing business expertise and the means by which each class of start-ups can take their businesses to the next level, The Brandery has partnered with Urban Sites to offer apartments in the building.

Stroud identifies as a longtime entrepreneur himself. He first went into business two decades ago running a convenience store in Madisonville.

“When you have an entrepreneurial spirit, you see things differently than people who work for somebody,” Stroud says. “You see your dream and your passion.”

Reginald Stroud in his house in Northside
Nick Swartsell

He ran his shop in Madisonville for three years before the storefront he rented was purchased by a new owner with other plans for the building. Eventually, stars began aligning for his next business venture, Anybody’s Dream, the convenience store he started in the Walnut Street building in 2004. Soon after, he and his family moved into an apartment upstairs as well.

Stroud says his main goal was to serve people underserved by other businesses, offering items for poor and working class OTR residents. He loved being able to offer low-price goods and finding things other people didn’t carry, whether it was low-price candy or essentials like socks and underwear.

“When the change happened, you started to lose some of those residents,” Stroud says. “In the middle part of my tenure there, it was vibrant. Then it started to diminish.”

That, in turn, led to decreasing business at his store, Stroud says. He says a number of other small businesses have been forced under by the changing population of the neighborhood.

Despite the difficulties he’s faced, Stroud says he doesn’t see himself as a victim and that he’s planning a new store in Northside. His story is also the subject of a forthcoming documentary by local filmmakers. In the meantime, he mourns the community from which he finds himself separated.

“On Walnut, there was a constant influx of people intermingling,” he says, the dull rush of the highway humming outside his house. “I don’t have that community here. I’m not over on the main drag on Hamilton Avenue. Every time I was on the street in OTR, I would get ‘How you doing, brother teacher?’ I don’t have that here.” ©