What some Ohio lawmakers saw as a wasteful gameshow gimmick, other governors saw as an opportunity. 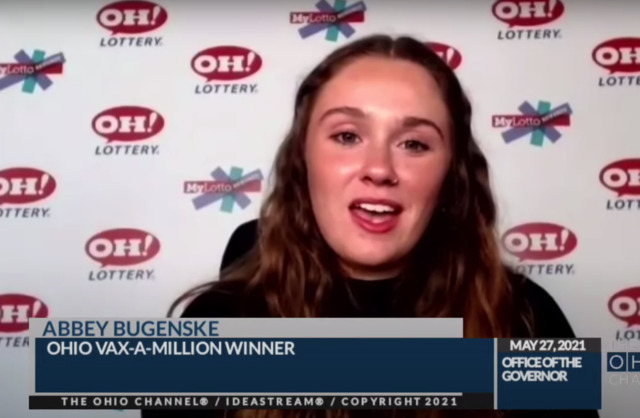 What some Ohio lawmakers saw as a wasteful gameshow gimmick, other governors saw as an opportunity.

It took only a few weeks after Gov. Mike DeWine announced the Vax-A-Million for other states to introduce their own vaccine lottery programs. There are cash prizes in Oregon, music festival tickets awarded in Delaware and even custom rifles available for the winners in West Virginia.

“I can’t stand for Ohio to get ahead of us on anything,” the Charleston Gazette-Mail quoted Gov. Jim Justice as saying.

There are nearly a dozen states across the country offering some type of vaccine lottery. In total, these states are offering close to $50 million in prize money along with college scholarships and other prizes.

The details differ from state to state. Some require registration, while others enroll vaccinated citizens automatically; some allow winners to remain anonymous, while others (like Ohio) want to use the winners’ likenesses for marketing purposes.

All the states, however, share an identical goal: Improving the vaccination rate by incentivizing people to get their appointments scheduled.

Not all unvaccinated Ohioans are hardliners against getting their shots, DeWine has said. Many are skeptical or do plan to get their shots, but for whatever reason they have not yet done so.

By introducing a lottery prize on May 17, DeWine’s hope was that a weekly, seven-figure prize would give them a reason.

There is evidence the gamble paid off.

Ohio Department of Health data from the week after Vax-A-Million was announced showed an uptick in vaccinations, both due to the lottery and the new eligibility of children aged 12-15.

Other states took notice. Colorado created a nearly identical program to give away $1 million each week for five weeks. Gov. Jared Polis, like DeWine, viewed the concept as an innovative marketing drive for the vaccine.

“We feel it will have a bigger impact on driving vaccination than if we were running TV ads saying to get vaccinated,” Polis said, per a Colorado Public Radio article. “And best of all, the benefit goes to five lucky Coloradans who did the right thing and protected themselves.”

There will be 10 winners in California receiving $1.5 million apiece in a June 15 drawing, along with dozens of other winners each taking home $50,000.

The “Vax 2 the Max” program in New Mexico is going even bigger. The Land of Enchantment is offering weekly drawings, with $250,000 going to winners in each of the state’s four public health regions. Then there will be a $5 million grand prize in August. The state has also placed 10 prize wheels at vaccination centers to give people a chance to win smaller prizes.

The latest state to make a splash with a vaccine lottery is nearby West Virginia.

The drawings there will coincide with West Virginia Day on June 20. Justice announced a $1 million top prize, a pair of college scholarships and a number of other prizes: Lifetime hunting and fishing licenses, trucks, guns and vacation packages to state parks.

“Those prizes are a play on Justice’s “Beat 588 Bad” slogan, based on his assumption that he is reaching out to 588,000 West Virginians who are vaccine hesitant or anti-vaccine,” the Gazette-Mail reported.

A wreck of an idea, or brilliant?

This is not the first time DeWine has been a trend setter as it pertains to the COVID-19 pandemic. He prohibited spectators from attending the Arnold Sports Classic in early March 2020 at a time when government mitigation was all but nonexistent.

Shortly after, Ohio was the first state to close its schools and turn to remote instruction.

In a guest column for The New York Times, DeWine wrote the idea of a vaccine lottery came from his chief adviser, Ann O’Donnell.

He credited some further inspiration to Bill Veeck, a former MLB team owner who was not averse to thinking outside the box when it came to marketing.

Veeck once signed a 3-feet-7-inch-tall player named Eddie Gaedel, who had one plate appearance in the big leagues before the league commissioner voided his contract. He’s also known as the originator of “Disco Demolition Night” in 1979. Publicity stunts like this made Veeck a controversial figure in baseball — he titled his autobiography “Veeck as in Wreck.”

Other Veeck ideas were a bit more ingenious, some of which were copied by fellow team owners: Adding players’ names on the back of jerseys, shooting off fireworks after games and holding “fan appreciation” nights.

DeWine, himself a Minor League Baseball team owner, decided to go through with a lottery despite the criticisms levied by state lawmakers from both parties. A fellow Republican, Rep. Jena Powell from Arcanum, even introduced legislation to prevent the Vax-A-Million drawings from taking place.

DeWine, undeterred, wrote that he kept in mind an old quote from Veeck’s autobiography.

“To give one can of beer to a thousand people is not nearly as much fun as to give 1,000 cans of beer to one guy,” Veeck once wrote. “You give a thousand people a can of beer and each of them will drink it, smack his lips and go back to watching the game. You give 1,000 cans to one guy, and there is always the outside possibility that 50,000 people will talk about it.”