Unlike many of their Metal peer group, whose overly serious heads are wedged tightly up their overly serious asses, iwrestledabearonce possesses a finely tuned sense of humor. Take the band’s 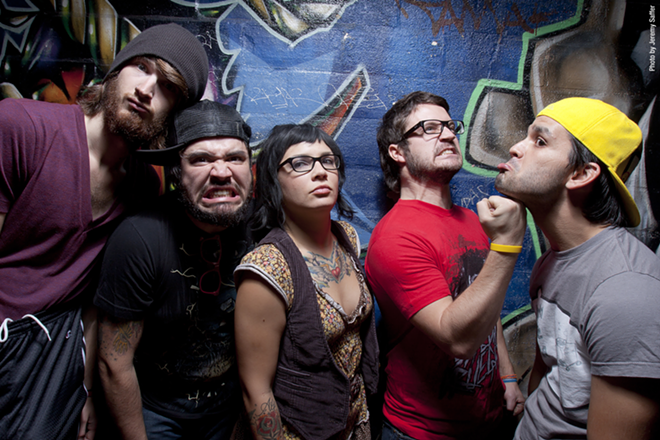 Unlike many of their Metal peer group, whose overly serious heads are wedged tightly up their overly serious asses, iwrestledabearonce possesses a finely tuned sense of humor. Take the band’s name, for instance, taken directly from a typically cryptic non sequitur delivered by the one and only Gary Busey. Then there’s the band’s declaration earlier this year that their new album, the recently released Ruining It for Everyone, was going to be “90% Black Metal” and that the band members would be incorporating corpse paint into their stage presentation to reinforce the switch. It turned out to be a joke designed to highlight the dire zealotry pervading that community. And there was an awesomely hilarious promo photo, a shot of the band tastefully appointed in relatively formal attire, posed in a wood-paneled drawing room, with a portrait of the exact same photo hanging on the wall behind the couch on which they’re seated, creating a lovely bit of infinite regression.

Finally, there’s the music of iwrestledabearonce, which drummer Mike Montgomery (theirs, not ours) recently described as “Avant-Garde-Electro-Trip Hop-Death Metal-Grindcore-Jazz Fusion.” He was laughing but hardly kidding; the band’s sound is a combination of Indie Rock texturalism, Metal volume and precision, bachelor-pad melodicism, thrashy speed and vocals alternating between demonized screamadelic bleeding and gorgeous Rock warbling, provided by the schizophrenic pipes of frontwoman Krysta Cameron.