Many states created renowned public universities from the proceeds of land sales from Native American cessations, including The Ohio State University

Reporting for the Eye on Ohio, The Ohio Center for Investigative Journalism-Ohio News Connection Collaboration. This story was funded by a grant from the Pulitzer Center on Crisis Reporting 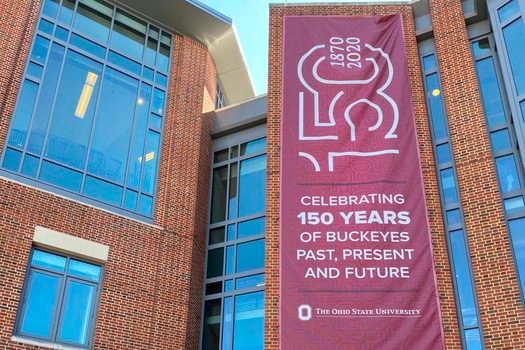 "I remember growing up and seeing this caricature of Native Americans that I knew wasn't true," Doran said.

Later she earned a biology degree at the Ohio State University. Doran loved the campus and appreciated the opportunities given to her, but she was not happy about the lack of Native American acknowledgement on campus. Instead, she found the university took pride in their status as a "Land Grant" university. The school sits in the heart of Columbus, home to the best-selling Land Grant beer.

"There's nothing really on campus that signifies the Native American history of the land," she said.

In recent months, outrage over racial injustices has sparked protests across the country. This outrage has helped uncover hidden histories and spark new conversations regarding the treatment of minorities in America. One area of discussion has been the place of minorities in higher education, particularly as many states created renowned public universities from the proceeds of land sales from Native American cessations.

In Ohio, land grant funds went to one of America's most prominent schools, The Ohio State University. According to research conducted by High Country News, the 1862 Morrill Act redistributed nearly 10.7 million acres from nearly 250 tribes, through 160 land cessions, the legal term for giving up territory.

Eye on Ohio mapped all lands that supported Ohio schools, a total of 4,411 parcels spread out over 14 states. (Though only 4,060 could be mapped. Click here to see our code and methodology.)

All of this land was out of state and included parcels in Mississippi, Michigan, Missouri, Florida, Kansas, Nebraska, Iowa, Wisconsin, Minnesota, California, South Dakota, Oregon, Colorado, and Washington.

(The Second Morrill Act of 1890 supplemented funds from the original law and provided for the nation's black colleges, which were not part of the 1862 act. Central State University near Dayton, Ohio started in 1887 as a publicly-funded department within private Wilberforce University, a historically Black college. So CSU is a land grant school but the lands sold to support it were not included in the survey.)

The United States government paid less than $400,000 to remove Indigenous titles from all Native lands, usually obtained through force or by treaties that the government never ratified, said Robert Lee, a lecturer in American History at the University of Cambridge.

Lee traced 97.5% of the land sales for Ohio under the 1862 law. Much of the land sold came from several tribes, including several Chippewa, Ottawa, Osage, and Sioux bands. Out of the 162 lands listed in Lee's research, 96 were taken by unratified treaties, 53 were ceded by treaties, and eight were taken either by executive order or without a treaty. How the other four pieces of land were obtained is unknown.

Michael Charles, a member of Navajo nation and a doctoral student at Ohio State, said data like this continues a narrative in Native communities that universities are not for them or in support of them.

"These universities can be seen as the evil system that keeps taking and taking," he said.

According to fall 2019 statistics, American Indian students made up just 0.1% of the student population on the Ohio State Columbus campus, though nationally, 0.7% of Americans are Native American alone. In total, 1.7% or 5.7 million people identified as Native American alone or in combination with another race.

But, Charles said research like this can help universities acknowledge more of their history and help them to become allies to current and future Native students. He also said this data could help higher education better understand why Indigenous youth may not consider pursuing a college degree.

"I think this is a very specific way that universities can start to understand kind of the conflict between Native people and universities," Charles said.

Today, Ohio State University has taken steps to create an inclusive environment for all, including American Indians.

"Today, the university's commitment to diversity and inclusion has never been stronger," Benjamin Johnson, Director of Media Relations at OSU, said via email.

The university also operates the Newark Earthworks Center. The center researches American Indian cultures and their contributions to architecture and other scientific achievements in the Midwest. Like other universities, OSU is responding to recent concerns of racial inequity with a task force. Johnson said the school's intercultural specialist for American Indian/Indigenous, Melissa Beard Jacob, serves with the group.

To acknowledge Native American lands, OSU has a land acknowledgment posted on its Multicultural Center website.

Charles said that an effective way for OSU to recruit more Indigenous students would be to send Native faculty out to the reservations and other large Indigenous communities. He also said the university should initiate a "bridge program" that would help the students make a successful transition into university life.

"It's going to have to take initiatives on both ends at the same time to make sure we recruit," Charles said. "And make sure we have people responsible for making sure they're coming into a community set-up that's going to set them up for success."

Former OSU student Nicole Doran also said she thinks the university could do more outside of the land acknowledgment to address Native American history in Columbus and on the Ohio State campus.

"I think the land acknowledgment is definitely a first step, but it can come off as very performative," she said.

Doran spoke of the Society of American Indians, the first American Indian activist group, on campus. They first met in 1911. But, Doran said there was nothing on campus that marked this historic event.

Land Grant Brewery, run by two OSU alumnus, Adam Benner and Walt Keys, first opened its doors to the public in 2014 after a successful 2012 Kickstarter campaign. After discovering their original name, Oval Brewing, was already copyrighted, Benner said they decided land-grant gave the same feel and gave a nod to their beloved alma mater.

"If you didn't understand land grants or what a land grant college came from, then the name still had a strong feel to it," Benner said. "And then we could still tell that story of what happened with the land grant act and how it established higher education throughout the country and that whole history."

Benner said he was now aware of the history of where the Morrill Grant's land came from but said the brewery takes pride in its name for how the grant made higher education more accessible for those outside of the upper-class and minority races.

"What we talk about every time we give a tour and why we are proud of the land grant heritage is that it was a law that was written right around the time of the civil war and was signed by Abraham Lincoln and the way it was written was that it couldn't preclude race," he said.

Benner acknowledges that the Morrill Act could have added to America's history of mistreatment of American Indians and that there is more to uncover of our nation's history.

A Growing Recognition of Native Rights and Representation Beyond Grants

In a landmark decision in July, the US Supreme Court ruled in favor of a defendant who asked for a new trial because he said his alleged crime had taken place on land owned by the Muscogee (Creek) Nation of Oklahoma. The ruling is significant because much of eastern Oklahoma, including most of Tulsa, is historically Native land.

John Low, an OSU at Newark professor and member of the Pokagon band of the Potawatomi tribe, said the Supreme Court's decision to honor Native treaties is a big win for the Native American community.

"It's an important victory for tribal sovereignty and honoring treaty rights," Low said. "It's a watershed moment."

While this decision calls for celebration, Low said there is more that needs to be done by the government to allow for tribal sovereignty.

"It's time for Indians, as an expression of their sovereignty to arrest and prosecute felonies," Low said.

After years of refusing, the Washington DC National Football League team recently announced they would change their name. This name change has caused other sports teams with Native American names to consider changing logos or names, including the Cleveland Indians.

Even with these concerns for stereotypes and Native youth, these negative images of Natives persist, and Low says they remain for one reason.

"The only reason why they have gotten away with it is because people know nothing about us or our influences," he said.

Low said the removal of these mascots would help distinguish stereotypes surrounding Natives.