Today's news and our top daily/weekly stories of 2014 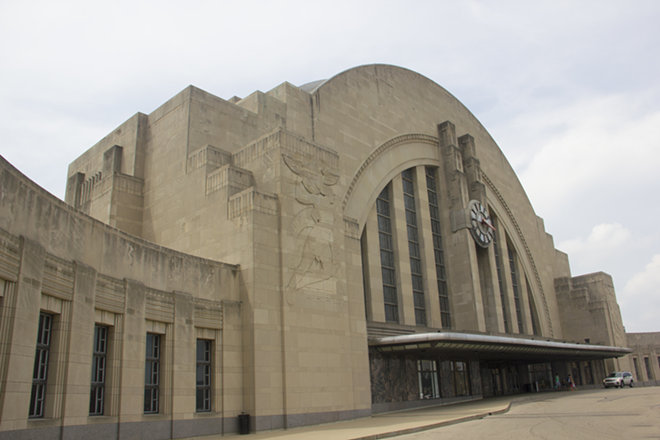 Hey all! In a minute, I’m going to hit you with the list: the biggest, the most interesting and the most disturbing stories we covered this year on a daily or weekly basis. We’ve already given you our favorite news cover stories; those long-form pieces which we spent weeks or even months putting together. Now it’s time for the everyday stuff. But first, let me just throw a couple things your way that are making news on the last day of 2014.

Memorials are planned for Leelah Alcorn, the Kings Mills 17-year-old who committed suicide on I-71 Sunday after suffering with lengthy depression and isolation due to her transgender status. These memorials include a candlelight vigil in front of Kings High School Saturday from 5:30 to 7 p.m.

In other news, the city came to an agreement with unions over its pension obligations last night. The deal, which took 10 months of negotiations, including a nine-hour marathon talk session between the city, employees and retirees, is complicated, but here’s the upshot: The agreement will allow the city to stabilize the pension fund, to which it owes $862 million, by whittling down retiree health benefits over time while putting $200 million from the health care trust fund into the pension fund. The city will also make a $38 million payment into the system next year.

On to the list. It’s a bit absurd to do these end of the year lists, right? I mean, ongoing stories don’t conveniently bookend themselves on New Years Eve, but tend to linger on and on (see: streetcar fight). But we have to stop somewhere and brag about our coverage, and the day we run out of calendar seems as good as any. So here are some of the big stories we covered in 2014:

1. Police Shootings and Race: A Familiar Story
Cincinnati is no stranger to controversy surrounding police shootings. So the unrest around an August incident in Ferguson, Mo., where a police officer shot an unarmed teenager named Michael Brown felt very close to home. The incident sparked civil unrest in Ferguson and across the country. Just days before, a similar incident occurred in a Beavercreek Walmart, where police shot 22-year-old John Crawford while he was holding a pellet gun sold in the store.

We watched the Crawford case closely from the beginning. His shooting as well as a  number of others around the country that came to light afterward were especially pertinent in Cincinnati, bringing back memories of the 2001 shooting of Timothy Thomas by police in Over-the-Rhine. We covered the parallels between 2001 and now, followed local reaction to the recent police shootings and delved deep into racial tensions in Beavercreek. New incidents of questionable use of force by police officers continue to emerge, suggest this story is far from over. We’ll be following it just as closely in 2015.

2. Icon Tax Debate
Two of Cincinnati’s favorite buildings need big help. But getting the money to renovate historic Music Hall and Union Terminal has been a political struggle. An initial proposal by business leaders would have levied a .25 percent sales tax increase over time to fund renovations on both buildings. But Republican Hamilton County commissioners Chris Monzel and Greg Hartmann balked at including Music Hall in that arrangement, opting instead to shorten the duration of the tax increase and only fix Union Terminal. That left supporters of OTR’s major landmark angry and triggered a campaign to unseat Hartmann in the November election, though that effort fizzled. Meanwhile, Music Hall may get the fixing up it needs after all: the building was awarded $20 million in tax credits in December that will go a long way toward needed renovations.

3. The Battle Over Cincinnati’s Last Abortion Clinic
After lawmakers passed restrictive new laws requiring clinics that provide abortions to have transfer agreements with area hospitals, and then turned around and barred state-funded hospitals from entering into those agreements, things looked bleak for the region’s two remaining clinics. The situation got even worse over the summer when the Ohio Department of Health revoked the license of one of those clinics, Women’s Med in Sharonville, after refusing to grant the clinic an exception to those new rules. The area’s last remaining abortion provider, the Elizabeth Campbell Surgical Center in Mount Auburn, got a similar warning from the state in November. The clinic had been waiting a year to hear back from the state about its request for a variance to the rules on the grounds that its doctors have individual admitting privileges with area hospitals. Planned Parenthood, which runs the clinic, sued the state, claiming Ohio’s laws are unconstitutional and present an undue burden to women seeking abortions. The state blinked, providing the clinic with a variance and keeping Cincinnati from becoming the largest metropolitan area in the country without direct access to abortion services.

4. Transit: Fights and Forward Movement
From ongoing streetcar drama to fights over bike lanes to efforts to bring better rail service to Cincinnati, how we get around got a lot of attention this year. In the spring, a battle flared up over Mayor John Cranley’s diversion of funds away from on-street bike lanes to bike paths, and further controversy arose over a new bike lane being built on Central Parkway. One business owner concerned about a few parking spots temporarily ground that project to a halt before the city agreed to spend thousands of extra dollars accommodating the parking concerns. There was some other progress on bike-related projects this year as paths on the city’s east side, including plans that could also someday include light rail, continued to take shape. Bickering about how the city will pay for the streetcar dominated the daily news, with new panics about the project’s yearly operating budget and construction contingency fund cropping up constantly. Meanwhile, in a project of a much larger scale, a group of advocates launched a campaign this year to get daily rail service going between Cincinnati and Chicago. Unlike the streetcar, that effort has been surprisingly bi-partisan. That level of agreement has been rare in transportation fights. But all the back and forth is good on one level — it means Cincinnatians are actively thinking about and engaged in conversations around transit alternatives.

5. Cincinnati’s Big Developments: Concerns and Questions
There’s no denying Cincinnati has had a huge year in terms of development. Over-the-Rhine continues to change at a rapid pace and other neighborhoods are quickly following suit in their own ways. But developers and the city administration that courts them are powerful folks, and it’s always good to ask questions when millions are getting thrown around like Monopoly money. We delved into concerns over Cincinnati City Center Development Corporation’s move into northern OTR, where the city awarded it decision-making power over a whole swath of neighborhood surrounding Findlay Market even as residents and the OTR Community Council expressed serious concerns about the deal. We talked to residents and businesses in Clifton Heights, where the city enacted zoning changes and tax deals for an out-of-town developer who will build a large, student-centered apartment complex despite protests from some long-time residents there. And we took a deep look into what the new I-71 interchange means for Avondale and Walnut Hills, both largely black communities whose members have historic reasons to distrust highway projects. Will development surrounding a new highway on and off ramp in these historically neglected and low-income neighborhoods lift up residents there, or will it bulldoze them? The questions around Cincinnati’s big-budget developments remain, and we’ll continue asking them in 2015.

6. Charter School Drama
2014 was the year things got weird at Ohio charter schools. VLT Academy in Cincinnati shut down after a long, messy fight by the school to secure a sponsor organization over protests from the Ohio Department of Education. A charter high school in Dayton, along with several others run by Chicago-based Horizon schools, came under scrutiny from federal authorities after former teachers made multiple reports of records forging and sexual misconduct. Overall, multiple studies, including a CityBeat review of state education data for Cincinnati charters, found that charters don’t seem to perform any better on the whole than public schools, and in many cases, perform worse. Meanwhile, charters are held to lower standards than public schools. All that begs the question: what are taxpayers getting for the diverted funds that pay for these often for-profit schools?

7. The Persistence of Poverty
We covered a number of issues surrounding poverty in Cincinnati, from former staffer German Lopez’s excellent cover story on the city’s poverty problem to more specific issues like affordable, subsidized housing, increases in homelessness in the city and a proposed hate crime law that would protect the homeless. There was also some good news, as Lower Price Hill, one of the city's poorest neighborhoods received free Wi-Fi so students and residents could connect to the outside world. As one of the city’s biggest, most complex challenges, Cincinnati’s high poverty rate works its way into a number of other issues such as sex trafficking, the heroin crisis and others, meaning we’re just getting started in our coverage. Expect much more in 2015.

This is by no means an exhaustive list. Some other big stories we checked out this year include German Lopez’s great piece on efforts to legalize marijuana in Ohio and our coverage of the court battle over Ohio’s gay marriage ban. When you’re all bored and hungover tomorrow, peruse our coverage from the last year. Then hit me up with what you’d like to see in the new year. What’s important to you that Cincinnati media is neglecting?  Find me at [email protected] and @nswartsell on Twitter.