No Indigenous Peoples' Day In Cincinnati — Yet

Council punted on reintroducing a motion to replace Columbus Day, but activists say they'll continue pushing for the change. 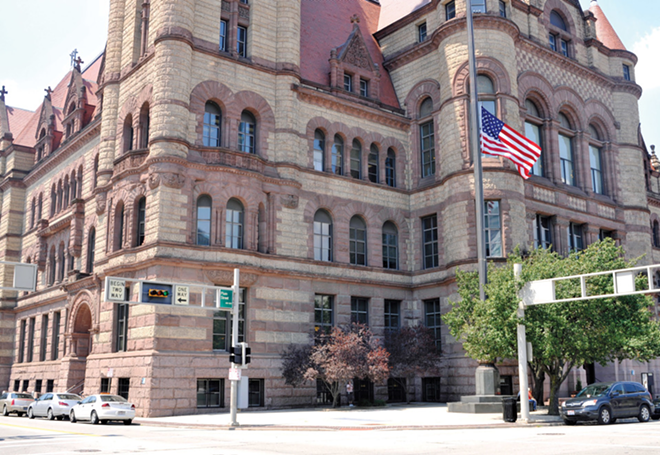 A year after Cincinnati City Council briefly considered — and then punted on — a motion to change Columbus Day in the city to Indigenous Peoples’ Day, advocates are again calling on elected leaders to make that change.

A group of roughly 20 crowded into City Hall yesterday before council’s weekly meeting to implore council members to vote for a measure, saying that commemorating Columbus equates to celebrating the genocide of millions of Native Americans after Europeans came to the new world.

“We would not honor those who are mass murders today, would we?” Cincinnati resident Megan Anderson asked Council. “Why are we honoring Christopher Columbus? We need to at least offer this as a way of moving forward.”

This year, no council member introduced any legislation seeking to change the day’s designation, which has been a federal holiday since 1937. Council members Yvette Simpson, Chris Seelbach and P.G. Sittenfeld, who all voted for the measure last year, said there simply weren’t enough votes to pass a measure this year, so they didn’t introduce one.

"Unfortunately, I don't think you're going to see a change today, but there's an election coming up," Seelbach told activists.

Black Lives Matter organizer Brian Taylor called council members "hypocrites" during the public comment portion of the meeting, saying those who supported the motion last year should have brought it up for a vote again to force their colleagues to make a public decision.

“I think you might want to consider having it on an alternate day,” Winburn said last year. “You might get a 9-0 vote, if it had its own special day, I think you’d get the vote.”

No other members of council commented on their abstentions last year. Vice Mayor Mann, the sole Democrat in the group, would seem to be the swing vote. But he says he’s not budging just yet.

Supporters of the change walked with Mann for two blocks after council, lobbying for a meeting between the vice mayor and leaders of local indigenous groups. Mann said he’s busy until after the election but is open to meeting later in November.

“I’m not going to decide before then,” he told advocates. He said he supports a day for indigenous peoples, but not at the expense of Columbus Day or "demonizing" the Italian sailor who landed in the Bahamas in 1492 while looking for a passage to Asia. Mann said he heard last year from constituents with Italian heritage who were upset by the prospect.

“Nothing changes by saying, ‘OK, a day that Italians find important is going to be eliminated,’ " Mann said. “Why does it have to be a zero-sum game? That’s the thing I don’t understand.”

Scientific studies suggest that indigenous peoples in the new world lost as much as half their population to disease, warfare and harsh treatment in the years immediately following the European arrivals kicked off by Columbus' four voyages. That doesn't count later deaths in battles with the U.S. government. All told, historians estimate between 75 and 90 percent of the Americas' indigenous population perished due to European colonization.

Locally, traces of native inhabitants of the Cincinnati area were unceremoniously removed in the late 1700s and early 1800s. Area residents at the time — including General "Mad" Anthony Wayne, who fought native peoples for U.S. control of Ohio and has a Northside street named after him — demolished a series of earthworks that covered much of the basin the city lies in. Today, only Mound Street in the West End commemorates them.

Last year’s motion would have made Cincinnati the first city in Ohio to declare an Indigenous Peoples' Day. Dozens of other municipalities, universities and other organizations have eliminated Columbus Day, including Austin, Texas, which voted to do so today, Los Angeles, which did so in August this year, and Spokane, Wash., which did so last year.

“As a member of the Greater Cincinnati Native American Coalition, we were proud and honored to submit our resolution last year,” Northside’s Jheri Neri told council yesterday. “We all know how and why it failed. But a lot has happened in the past year.”

Neri pointed out that City Council voted to ask Gov. John Kasich to remove Ohio Troopers from Standing Rock, N.D., voted to make Cincinnati a Sanctuary City and changed street names back to their original German names to, as Mayor John Cranley said at the time, “right the wrong” caused by anti-German hysteria during World War I.

“This issue has been a much longer time coming,” Neri said.

Activists like Neri say they'll keep lobbying council members to introduce legislation and vote for the change. They will hold a rally at 5 p.m. this Sunday in Washington Park.