A federal grand jury turned in 30 indictments on hate crime charges against James Alex Fields, who is accused of ramming his car into a group of anti-racism protesters, killing one 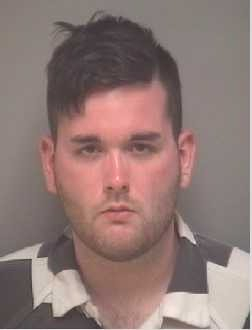 A federal grand jury today returned an indictment with more than 30 hate crime charges against James Alex Fields Jr., who is accused of driving his car into a group of protesters at last August's white nationalist "Unite the Right" event, killing anti-racism protester Heather Heyer.

Fields, who attended high school in Northern Kentucky and lived in Florence before moving to Maumee, Ohio, allegedly attended the rally protesting the removal of a Confederate monument in Charlottesville, Va. on Aug. 12, 2017. While there, authorities say he engaged in white supremacist chants at the city's Emancipation Park, where he was photographed holding a shield with a logo for a hate group. After authorities cleared that crowd, Fields slowly drove his car through a crowd of people protesting against white nationalists on Fourth Street. He then reversed his car back up the street, the Federal Bureau of Investigation says, before accelerating down the hill and plowing into the large crowd, killing Heyer and injuring dozens of others. After hitting another car, Fields reversed again and fled the scene.

Fields is already facing state murder charges in Virginia, but the U.S. Department of Justice and the FBI say Fields' alleged actions also constitute hate crimes. Fields is charged with one count of a hate crime act causing the death of Heyer, 28 counts causing injury to others and one count for driving his car into a protest.

Fields had a tumultuous adolescence. His mother called 911 multiple times when Fields lived with her in Florence to report his threats of violence against her. Teachers and fellow students at schools Fields attended recalled his keen interest in Nazism to news media following his alleged acts at the Unite the Right rally.

"Hatred and violence have no place in our communities," FBI Director Christopher Wray said in a statement today. “The investigation of hate crimes is a top priority of the FBI, and we will continue to work with our partners to ensure those who perpetrate such despicable acts are held accountable.”