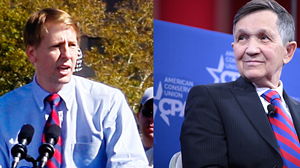 Hello, Cincinnati. I hope your weekend was good. I spent some of mine at the Appalachian Studies Association Conference, which was fascinating. If you didn’t get a chance to go, you missed out on a ton of great panels and interesting tours. Though Cincinnati isn’t technically in Appalachia, folks from the region have made an indelible mark on the city.

As you probably already heard, Cincinnati City Council may have a deal that would pave the way for an FC Cincinnati soccer stadium in the West End. You can read Friday’s CityBeat story on that here, but the long and short of it is that Cincinnati Public Schools would get the tax money they’ve asked for under the deal and the team would donate land for roughly 160 units of affordable housing and commit to $100,000 a year in contributions to neighborhood groups as part of a community benefits agreement. Council will likely vote on the deal next week.

• The father of a victim of February's Parkland, Fla. mass shooting will visit Cincinnati today to join a group of Hamilton County young Democrats for a discussion on gun control. Fred Guttenberg's daughter, 14-year-old Jaime Guttenberg, was one of 17 people killed when a gunman opened fire at Marjory Stoneman Douglass High School Feb. 14. Today's discussion is open to the public and will take place at 5:30 p.m. at the Transept in Over-the-Rhine.

• The Southwest Ohio Regional Transit Authority will launch its free WiFI pilot on Metro buses today at Government Square at 11:30 a.m. There will be a WiFi-equipped Metro bus on site — one of 59 the transit authority is fitting with the technology paid for by a federal grant. SORTA is mulling installing WiFI on all buses eventually. You can read more about the program here.

• Cincinnati Public Schools could purchase the campus of a local private Catholic high school as the latter closes its doors. Mother of Mercy High School in Westwood is merging with College Hill’s McAuley High School, and will no longer need its historic 1915 campus. But CPS, which is experiencing a big growth in enrollment on the West Side, is very interested in buying the property and seems to have come to an agreement with school owners Sisters of Mercy. It’s unclear exactly what CPS would use the building for, but with space running out at its current schools in the area, it’s likely the stately building would remain a place of learning.

• Lots going on in state politics this week. Let’s start with Ohio House Speaker Cliff Rosenberger, who is currently the subject of a probe by the Federal Bureau of Investigation. It’s unclear what interest the FBI has in Rosenberger, a Republican, but he’s retained the services of David Axelrod, a white-collar crime attorney. Rosenberger has done a lot of on-the-job traveling during his seven-year tenure in the state house — an easy way for a lawmaker to draw ethical scrutiny. He’s also presided over a state house rocked by harassment scandals. But it’s unclear if the probe has anything to do with those issues or is about something unrelated.

• The Ohio Democratic gubernatorial primary is heating up. All four contenders — former Ohio Supreme Court Justice Bill O’Neill, State Sen. Joe Schiavoni, former U.S. Rep. Dennis Kucinich and former U.S. Consumer Financial Protection Bureau head Rich Cordray — will face off tomorrow at a debate at Miami University Middletown. That debate comes as a new poll shows Cordray — once the frontrunner — and Kucinich neck and neck. The latter, who ran unsuccessfully for the Democratic Party’s presidential nod in 2004 and 2008, has made some head-turning assertions of late, sometimes defending President Donald Trump on Russia and other issues. Kucinich also has some very progressive policy beliefs, pushing for a lift in the minimum wage and touting his F rating from the National Rifle Association. Tomorrow’s debate will likely be interesting.

If you’re looking to vote in the May 8 primary, by the way, better get out and get registered — today is the last day to do so.

• On to Ohio’s U.S. Senate race, which will likely be between incumbent Democrat Sherrod Brown and his challenger, U.S. Rep. Jim Renacci, a Republican. Renacci, who was previously running for the GOP's gubernatorial nod before dropping out to run for Brown's Senate seat, has received some scrutiny of late for financial transfers between his congressional campaign accounts and his former gubernatorial campaign. Election watchers point out that Renacci donated money from his federal campaign to other Republican candidates, who then in turn donated some of those funds to his state gubernatorial campaign committee. Renacci had already transferred the legal maximum from his federal campaign account to his state campaign, and critics believe that the donation shuffle between Renacci and a dozen Republican candidates for the U.S. House was designed to evade that limit. Renacci’s campaign, however, calls that a “conspiracy theory.”