"We have to look at the progressive states that are seeing the benefits and are opening up a whole new industry for business opportunities, and it's working," Rep Sedrick Denson says. 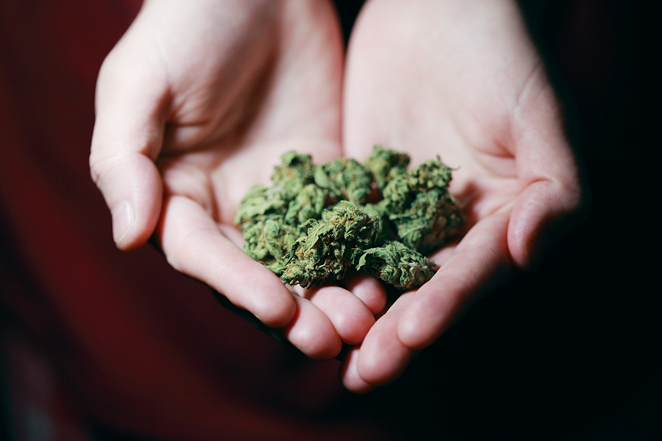 As marijuana becomes more mainstream, some legislators want Ohio to join the growing list of states legalizing the drug for recreational use.

House Bill 210, which would legalize recreational marijuana, is co-sponsored by Democratic state Representatives Sedrick Denson of Cincinnati and Terrence Upchurch of Cleveland. Their bill would also allow for the expungement of some convictions and for marijuana to be grown at home.

While the bill is unlikely to pass, Denson said, its presence promotes awareness and attracts media attention, so more people can be educated on this topic.

"We have to look at the progressive states that are seeing the benefits and are opening up a whole new industry for business opportunities, and it's working," Denson said. "The sky's not falling, and things are not falling apart in those states. We have got to be progressive and be out there — I know it's a long haul, and it's an uphill conversation, but the reality is that my responsibility is to put this bill out there and force my colleagues to have that conversation."

While the state legalized marijuana for medicinal use in 2016, high prices for products have resulted in medical card users traveling to such nearby states as Michigan to purchase products at lower prices. This hurts Ohio's medicinal marijuana industry, which has led some legislators and other advocates to encourage the legalization of recreational marijuana in this state.There was an attempt in 2015 to legalize recreational marijuana in Ohio through a ballot initiative, but the measure failed, with nearly 64% of voters opposed and 36% approving.

If the initiative had passed, it would have monopolized the industry to benefit a small number of investors and companies.

Legalizing marijuana for recreational use in Ohio would lead to a significant expansion of economic growth, said Douglas Berman, the executive director of the Drug Enforcement and Policy Center at The Ohio State University. The emergence of new markets would also allow for an increase in the number of dispensaries in Ohio's major cities, which could strengthen local economies and create jobs. The increase of sales would allow for increased tax revenue for the state as well.

Republican politicians are the main hurdle preventing recreational marijuana legalization through the General Assembly, but this narrative is changing as more Republicans warm up to the idea. Former Ohio Gov. John Kasich approved the passing of medicinal marijuana legislation in Ohio; more recently, U.S. Rep. Dave Joyce (R-Ohio) sponsored a legalization bill in the U.S. House of Representatives in May that would take marijuana off the federal list of controlled substances.

Drug prevention groups, however, continue to advocate for keeping marijuana illegal, highlighting the negative aspects of the drug, such as increased car crashes and accidental ingestion by children. Fran Gerbig, executive director of the Prevention Action Alliance, said Ohioans need to understand the impacts of the recreational industry and how it can affect communities, as legal products offer a higher amount of tetrahydrocannabinol (THC) — the psychoactive element in marijuana — than products contained when all marijuana was illegal.

"It's important to know that it's not that we are condemning the substance per se; we feel there's not been enough research and that we don't know the true impact of cannabis on the health and wellness of an individual," Gerbig said. "Cannabis currently has a higher THC content, and that is an unknown. It's being cultivated to provide a hallucinogenic effect, and it makes me fearful for the health and safety of individuals."

Recreational marijuana legalization in Ohio will happen at some point within this decade, said Cleveland cannabis lawyer Tom Haren. The question is whether the state will legalize it before the federal government takes the drug off the controlled substances list.

Also, if the federal government legalizes marijuana before the state does, Ohio could face a number of regulatory problems.

"If marijuana is no longer a controlled substance, it means it is no longer illegal to possess, traffic or distribute and sell it," Haren said. "You still would have within the medical program a highly regulated system, but then you would have a separate unregulated and legal market where even children (for example) could go and buy marijuana. There would be no age requirement, no potency requirement, no testing requirement, no licensing requirement, no background check requirement, no setbacks for schools or churches, public playgrounds [and] libraries. Literally overnight, Ohio could be in a very difficult position if we are not proactive in anticipating the change that is going to come at the federal level."

Legalized marijuana would lead to a series of changes, Berman said, on how the substance is regulated by law enforcement.