Albright was a notable political figure and a feminist icon. 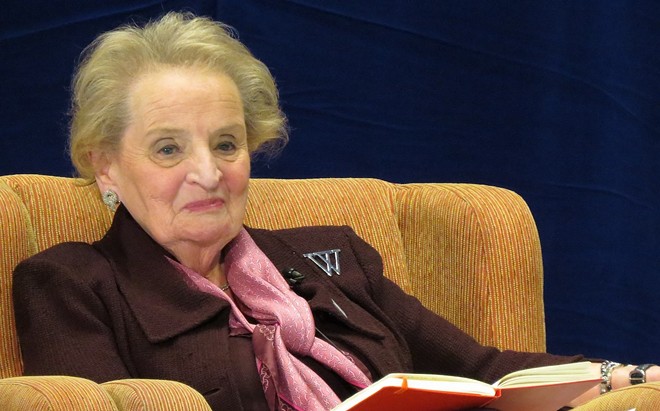 The governors made their announcements Thursday, one day after Albright's death from cancer. The orders, which follow U.S. President Joe Biden's similar order for federal buildings, applies to all state buildings and grounds through sunset on March 27.

Albright, who was 84, was a notable diplomat in many regards. The daughter of Czech refugees who had fled from Nazis (and who lost dozens of family members to Nazi killings), Albright became the United States' first female secretary of state in 1997 under U.S. President Bill Clinton. She was a go-to foreign-policy advisor for a number of U.S. presidents and presidential candidates, the New York Times reports in her obituary. U.S. President Barack Obama awarded Albright the Presidential Medal of Freedom in 2012.

Albright also was known for advocating for other women. During the 1990s and, more recently, during a 2016 presidential campaign stop for Hillary Clinton — who also became secretary of state — Albright said, "There’s a special place in hell for women who don’t help each other." She frequently found herself in decision rooms with only men, which pushed her to speak up and speak frankly. She also talked about how women were forced to exceed all expectations in order to be judged even at the same level as a man.

Albright stirred things up when she appeared on Full Frontal with Samantha Bee in 2016. Bee was interested in Albright's take on the misogyny that critics had heaped upon candidate Hillary Clinton. In the segment, Albright talked about the sexism that she'd experienced.

"Why are men afraid of women? I think we’re seen in whatever previous relationship they have had, like when the third grade teacher told Johnny to be nicer — or Donald," Albright said, referring to Clinton's challenger Donald Trump, who would go on to become a president who pushed racist, sexist and homophobic policies, inspired a violent insurrection, tried to delegitimize a federal election, and denied for a very long time a pandemic that killed hundreds of thousands before he left office in late January 2021 (and pushed Republicans to continue passing anti-medicine, anti-science legislation).

Bee has been sharing clips of Albright's segment on social media since the SoS's death.

Watch Albright on Full Frontal below.