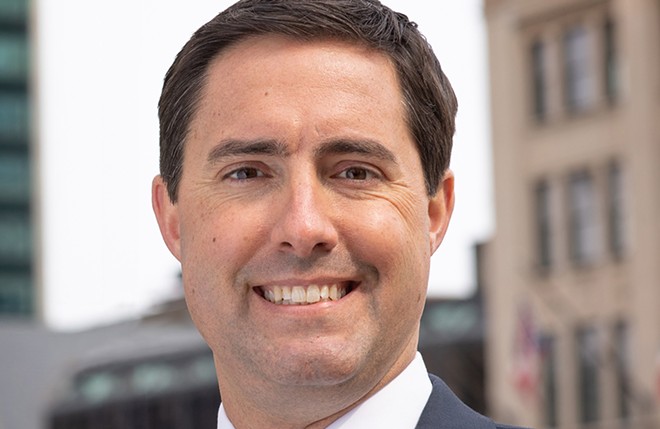 Photo: Official Portrait
Ohio Secretary of State Frank LaRose
Members of the now-disbanded Ohio Redistricting Commission joined together in asking the Ohio Supreme Court to dismiss the congressional redistricting case against them in a filing made public Monday afternoon.

Attorney General Dave Yost’s office wrote on behalf of Gov. Mike DeWine, Secretary of State Frank LaRose, Senate President Matt Huffman and House Speaker Bob Cupp, as well as Auditor Keith Faber, state Sen. Vernon Sykes and House Minority Leader Emilia Sykes in a motion to dismiss the case and stop evidence-gathering in the case because the plaintiffs in the lawsuit “failed to allege sufficient facts to establish standing to sue the Commission (members) or the governor.”

Commission members are all asking to be removed from the lawsuit, however Cupp, Huffman and LaRose all acknowledge they can’t be removed in their “non-Commission capacities.”

In asking the court to dismiss the commission members from the case, the Attorney General’s office said plaintiff’s are suing the ORC members “for something that they did not do: draw and enact the 2021 Congressional Plan.”

“Unlike the process for state-level redistricting, the constitution contemplates a process whereby the General Assembly draws and enacts the map for new congressional districts,” the group stated in the latest court filing. “That is what happened here when the General Assembly drew and enacted the 2021 Congressional Plan by a simple majority vote as provided for by (the constitution).”

The National Redistricting Action Fund filed a lawsuit on behalf of a dozen Ohio residents calling the recently redrawn congressional district lines unconstitutional and gerrymandered to dilute the votes of minority Ohioans. The House passed the map less than two weeks ago, and Gov. Mike DeWine signed it into law on Nov. 20.

The lawsuit names the leaders of the legislature, Huffman and Cupp, along with the rest of the members of the Ohio Redistricting Commission, who weren’t able to agree on a map after the legislature passed by their first deadline to approve congressional redistricting.

The process came back to the legislature on Nov. 1, and state Sen. Rob McColley (R-Napoleon) took the lead on Senate Bill 258, which would become the vehicle for the approved map.

Because the lawsuits names “improper respondents,” the ORC members say the evidence-gathering “discovery” process should stop pending a court ruling on the motion to dismiss.

“Simply put, (plaintiffs) most sue the wrong parties, they are entitled to discovery from those parties, and their claims against them must be dismissed,” court documents from the ORC state.

Ohio’s secretary of state wants to see the court challenge of congressional redistricting moved up for fear the judicial process might “wreak havoc” on the 2022 congressional primary.

LaRose filed a response to the scheduling in the Ohio Supreme Court case agreeing that time is of the essence in the case, but that the proposed schedule for document submissions and oral arguments in the case is “entirely too long from an election administration perspective.”

“If this Court were to accept (the challengers) proposed schedule, it would be impossible to re-tool the 2021 Congressional Plan before the March 4, 2022 deadline,” attorneys for LaRose wrote. “So, (the plaintiffs’) proposed schedule is unworkable for congressional candidate hopefuls in virtually every possible scenario.”

Senate Bill 258 includes new filing and certification dates for the U.S. House race, after legislators anticipated the timeline for passage of the law itself would impact candidacy deadlines.

The NRAF asked the court to resolve the case in advance of the March 4, 2022, deadline for U.S. House candidacy filings. However, the map challengers asked that no plan be allowed under the current congressional redistricting plan.

“Allowing an election to be held under that plan (should the Court strike it down) is akin to allowing Respondents to reap the bounty of the fruit of a poisonous tree,” attorneys for the NRAF wrote.

The group representing Ohio residents proposed all documents in the case be submitted by January 21, and oral arguments, the final phase before the state supreme court makes its ruling, be held Feb. 8 to accommodate the March 4 deadline.

But LaRose said the schedule proposed by the NRAF “fails to consider the complicated logistics of holding elections and the real dangers of failing to meet critical statutory deadlines.”

The elections chief said the state also has to prepare for a potential invalidation of the map by the court, which brings back the General Assembly and the Ohio Redistricting Commission to start the process again.

If the court sends the map back, the GA has 30 days to make changes asked of it by the court. If those 30 days pass without changes, the process heads back again to the ORC, where they will have another 30 days to address the court’s concerns.

The secretary of state argued that the case “can and should be streamlined and expedited” and that “little time is needed for fact discovery because it is unnecessary to resolve the legal issues in this case.”

LaRose’s attorneys countered the proposed schedule, asking the court to finish all document gathering by the end of December to help not only the Secretary of State’s office, but the local county boards of election, time to verify and certify candidate petitions as well as consider candidacy protests.

“Even if this court would very quickly uphold the 2021 Congressional Plan after (court challengers’) suggested oral argument date, congressional candidates would still only have mere days to complete these required tasks,”

Logistics having to do with the new district maps don’t just extend to filing deadlines, according to LaRose. Because the state lost a district, boards of election have to re-program electronic voter registration systems and voting machines, along with reassigning voters to the 15 new districts, all before the May 3 primary.

“They are grossly over-simplifying the downstream consequences of moving the 2022 Primary Election or any of its dates,” LaRose’s attorney wrote in the court filing.

In a separate filing, Huffman and Cupp’s attorney joined LaRose in saying the court case should be expedited to avoid any more impact to the 2022 primary. LaRose also submitted a brief putting on the record that he considers Senate Bill 258 to be constitutional.