Ohio Gov. Mike DeWine mobilized around 1,000 troops to D.C. to aid security for President Joe Biden’s inauguration and authorized 480 troops to be stationed at the Ohio Statehouse that week. 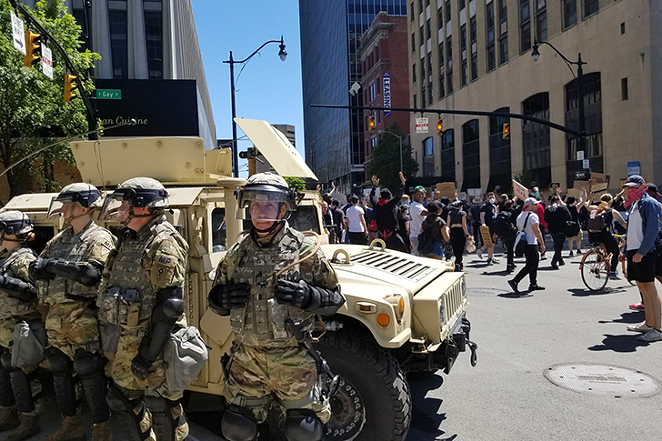 Photo: Marty Schladen.
The Ohio National Guard stands post in downtown Columbus last year.
It cost the state of Ohio more than $1 million to send hundreds of troops to the Ohio Statehouse last month to protect against acts of political violence.

All told, taxpayers spent millions of dollars to pay for enhanced security in Columbus and Washington, D.C. following the Jan. 6 events at the U.S. Capitol.

After the deadly insurrection at the nation’s capital, DeWine mobilized around 1,000 troops to D.C. to help with security for President Joe Biden’s inauguration. DeWine also authorized 480 troops to be stationed at the Ohio Statehouse during planned protests on inauguration week.

The cost of stationing troops in Columbus, as approved by the Ohio Controlling Board on Monday, was $1,035,000. Most of this amount ($695,000) went to payroll, with the remainder spent on food, travel costs and other supplies.

The price of extra highway patrol security at the Statehouse was more than $2.4 million, The Associated Press recently reported.

The deployment of Ohio troops in D.C. cost more than $2.1 million, but this is paid for by the federal government, according to Stephanie Beougher, the public information officer for the Ohio National Guard.

Public officials had worried about the potential for violence as online extremists turned their attention from the U.S. Capitol to the 50 state capitals. The Ohio Statehouse and other government buildings in downtown Columbus were closed for four days.

In spite of — or perhaps because of — the immense show of force, there were no reported incidents of violence in Columbus. Law enforcement officers outnumbered a small gathering of armed protesters, who stayed only for a few hours before escaping the frigid weather.

Protesters caused more than $150,000 in damage at the Statehouse last May and more than $1 million in damage to nearby businesses and offices. In response, the governor deployed Ohio National Guard troops to Columbus and Cleveland at an eventual cost of $3.2 million.

A Republican state senator recently proposed a bill to install security cameras at the Statehouse and increase the penalties for arson and vandalism.