The Second Amendment and Mass Shootings 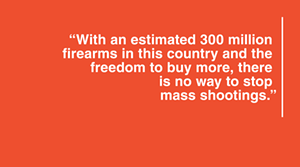 It’s been decades since I fired an assault rifle. It was the standard weapon of the South African Defense Force. Intimidating.

I was more at home with the British STEN, a World War II submachine gun. Mine, I was told, was made in the colonial Rhodesian railways machine shop. That was a keeper.

The South African rifle’s magazine held 20 cartridges; the STEN, 32 rounds. Each could fire single shots or bursts on full automatic.

STEN is an acronym using the first letters of the last names of the Brits who designed the gun — Major Reginald V. Shepherd and Harold Turpin — and “EN” for Enfield, the arms manufacturer.

AK-47 was named for Mikhail Kalashnikov, its Soviet designer.

The AR-18, designed by California’s ArmaLite, was famously used by the Irish Republican Army and lauded in their famous taunt, “God made Catholics but ArmaLite made us equal.”

My assault rifle and STEN were appropriate to their time and place. I mention that as background for my impatience with the reporting of mass shootings in our country.

An assault rifle is a long weapon, typically fired from the shoulder; think AR-15 or AK-47. A submachine gun is a stubby, handheld weapon with a short barrel; think UZI or Tommy gun. Debate on reducing gun violence requires clear language in the news media; careless or willfully ignorant journalists promote blather, hyperbole and paranoia. Demonizing the Second Amendment, AR-15 or the NRA doesn’t help.

Politicians worsen this with self-serving misstatements, guesswork and duplicity. Amplifying their perfidy is stenographic reporting without the wit to challenge the wildest and dumbest assertions.

Our renewed debate is about more than school violence. The CDC says more than 33,000 people are shot to death annually, most of them suicides by handguns. Few criminals carry rifles or shotguns; handguns are used to kill the vast majority of the approximately 11,000 homicide victims each year.

With an estimated 300 million firearms in this country and the freedom to buy more, there is no way to stop mass shootings (defined as four or more victims).

Tinkering with the federal background check system won’t end mass shootings and I’m not optimistic about the Republican Congress adopting anything likely to reduce gun violence in an election year.

Still, despite my pessimism about the role of the news media in this fraught reality, here are some useful insights and ideas that I’ve read or heard since the latest high school massacre.

My take on all of this? In this election year, only foolish Republican representatives and senators would bet their seats on Trump’s latest tweets about gun control.

Morever, Republicans know students will return to class and outrage will fade; it always does. By November, the NRA’s ability to muster GOP votes and target campaign donations will matter more.